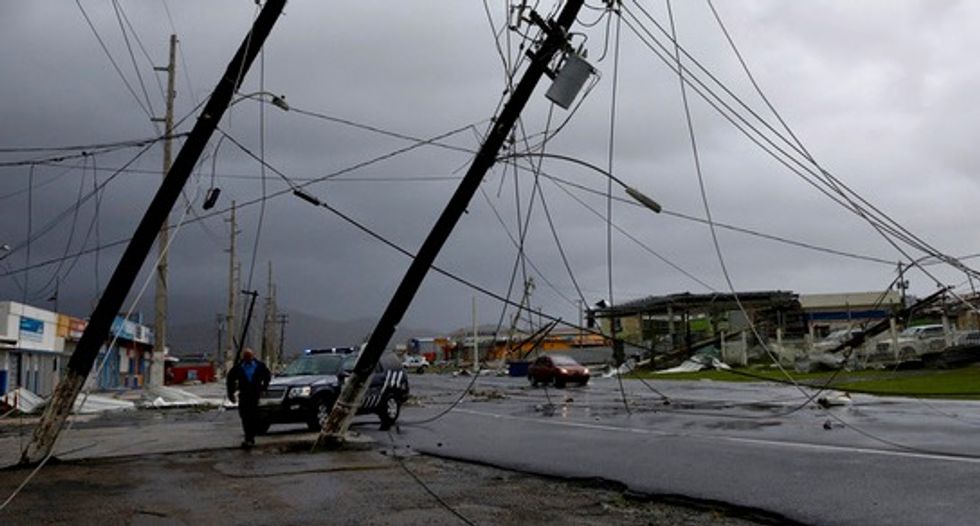 Hurricane Maria, the second major hurricane to wreak havoc in the Caribbean this month, skirted by the Turks and Caicos Islands on Friday and was blamed for fresh flooding on Puerto Rico two days after ravaging the U.S. island territory.

The storm, which ranked as the most powerful hurricane to strike Puerto Rico in 90 years, has killed at least 25 people there and on other Caribbean islands, according to government officials and local news media accounts.

U.S. weather forecasters and Puerto Rico Governor Ricardo Rossello warned that a dam on the rain-swollen Guajataca River in northwestern Puerto Rico was failing, causing flash flooding in the area.

"This is an EXTREMELY DANGEROUS SITUATION," the National Weather Service's San Juan office said on Twitter. "Buses are currently evacuating people from the area as quickly as they can."

Roughly 70,000 people live in the area downstream from the dam that was under evacuation, Rossello said in a late-afternoon news conference.

Maria struck Puerto Rico, an island of 3.4 million inhabitants, as a Category 4 storm on the five-step Saffir-Simpson scale and cut a path of destruction through the center of the island on Wednesday, ripping roofs from buildings and triggering widespread flooding. Torrential downpours from the storm sent several rivers to record levels.

Puerto Rico officials said on Friday that six people had been confirmed killed by the storm: Three died in landslides in Utuado, in the island's mountainous center; two drowned in flooding in Toa Baja, west of San Juan, and one died in Bayamon, also near San Juan, after being stuck by a piece of wind-blown lumber.

Earlier news media reports had put the island's death toll as high as 15.

"We know of other potential fatalities through unofficial channels that we haven't been able to confirm," said Hector Pesquera, the government's secretary of public safety.

In San Juan, people worked to clear debris from the streets on Friday and some began to reopen businesses, though they wondered how long they could operate without power and with limited inventory.

"There's no water, no power, nothing," said Rogelio Jimenez, a 34-year-old pizzeria worker.

"We're opening today," he said, estimating that the restaurant had enough supplies to last a week. "If there's nothing after that, we'll close."

Puerto Rico was already facing the largest municipal debt crisis in U.S. history. A team of judges overseeing its bankruptcy has advised involved parties to put legal proceedings on hold indefinitely as the island recovers, said a source familiar with the proceedings.

The storm was expected to cause $45 billion of damage across the Caribbean, with at least $30 billion of that in Puerto Rico, said Chuck Watson, a disaster modeler at Enki Research in Savannah, Georgia. The figures included both physical damage and losses in business from tourism.

Elsewhere in the Caribbean, 14 deaths were reported on the island nation of Dominica, which has a population of about 71,000. Two people were killed in the French territory of Guadeloupe and one in the U.S. Virgin Islands. Two people died when the storm roared past the Dominican Republic on Thursday, according to local media outlet El Jaya.

Communications outages throughout the region were making it difficult for officials to get a clear picture of the damage.

Maria churned past Turks and Caicos and was 115 miles (185 km) east-northeast of the southeastern Bahamas by 5 p.m. EDT (2100 GMT) on Friday, the NHC said. It was packing sustained winds of up to 125 miles per hour (205 km per hour), making it a Category 3 hurricane, but was expected to gradually weaken during the next two days.

Officials on Turks and Caicos had ordered all residents of the islands to remain indoors and businesses to close on Friday as the hurricane neared, bringing a storm surge of as much as 12 feet (3.7 meters) above normal tide levels. But hurricane warnings for the islands, constituting a British overseas territory, were later downgraded to tropical storm warnings as Maria passed.

Storm swells driven by the storm were expected to reach the southeastern coast of the U.S mainland on Friday, the NHC said, adding that it was too soon to determine what, if any, other direct effects it would have.

Maria passed close by the U.S. Virgin Island of St. Croix, home to about 55,000 people, early Wednesday, knocking out electricity and most mobile phone service.

More than two months remain in the Atlantic hurricane season, which runs from June 1 to Nov. 30, although the busiest period is generally from mid-August to mid-October.