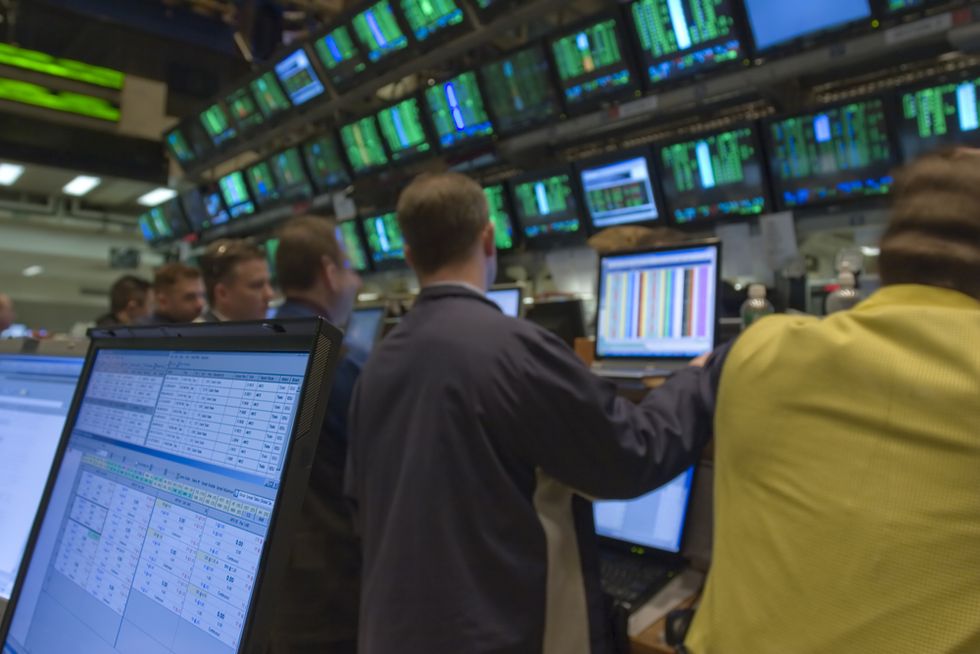 There are none so blind as those who will not see.

This phrase may have religious roots, but there is no better way to describe the dominant sect in economics today than as wilfully blind. A decade after the 2007-08 crisis, most still repeat the mantra that it could not have been predicted.

Nonsense. The data that showed what would cause the crisis, and arguments by non-mainstream economists that one would occur, were available before it hit. There was a runaway bubble in asset markets caused by too much credit being created by banks.

Credit – your capacity to buy something with money borrowed from a bank, rather than from your own cash – is exactly equal to the increase in private debt every year. The bigger this is compared to a country’s GDP (economic output), the more the economy is dependent on credit; and the bigger the accumulated debt is when compared to GDP, the more likely it is that a reduction in credit will cause an economic crisis.

The data is incontrovertible

The data, if you look at it, is incontrovertible – especially if you consider the epicentre of the 2008 crisis, the US, in historical context. The Great Depression triggered by the crash of 1929 was preceded by a margin-debt-fuelled bubble on the US stock market, with private debt blowing out during the crisis and then collapsing. That’s exactly what happened in 2007-08 – only with mortgage debt also getting in on the act.

Private debt affects the economy in two ways: the higher debt is, relative to GDP, the more that a change in credit impacts on total demand. And credit adds to total demand by allowing people to spend more than just the money they currently have.

The correlation between credit and employment in the US is staggering. This is not just because it is so big (the correlation coefficient is 0.8 on a scale of -1 to +1), but because according to mainstream economists such as Ben Bernanke, the correlation should be close to zero. 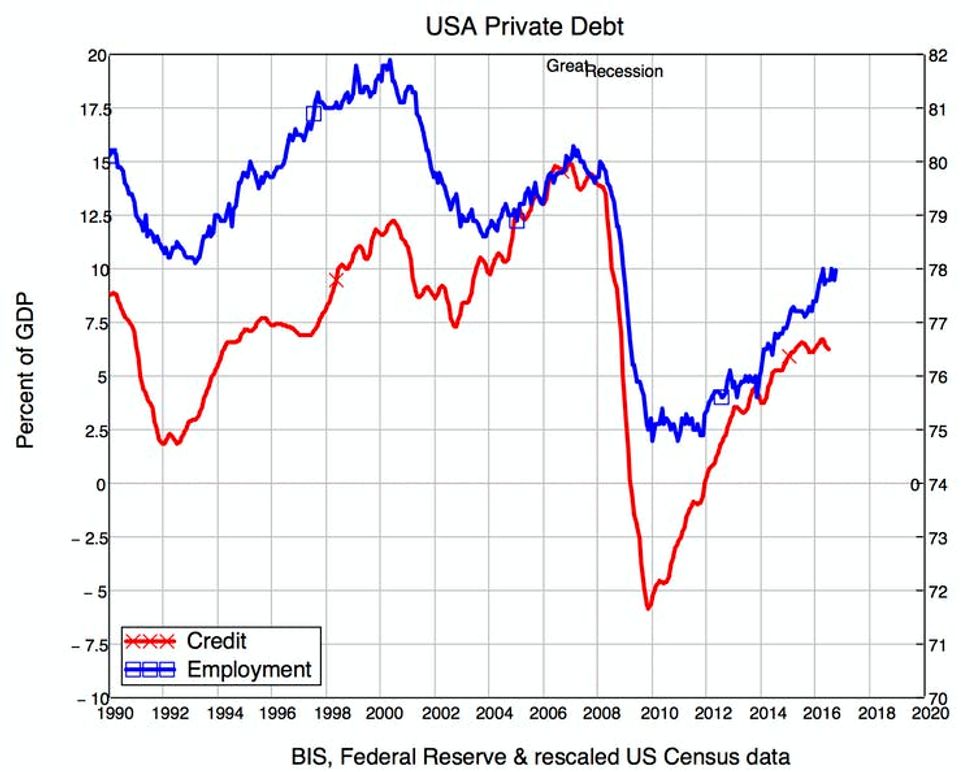 Bernanke, who got the job as head of the US central bank because he was supposed to be the expert on what caused the Great Depression, didn’t even consider similar data that was available at the time, nor 1930s economist Irving Fisher’s thesis, which pointed the finger at the bursting of asset bubbles. Bernanke believed that credit “should have no significant macroeconomic effects”. 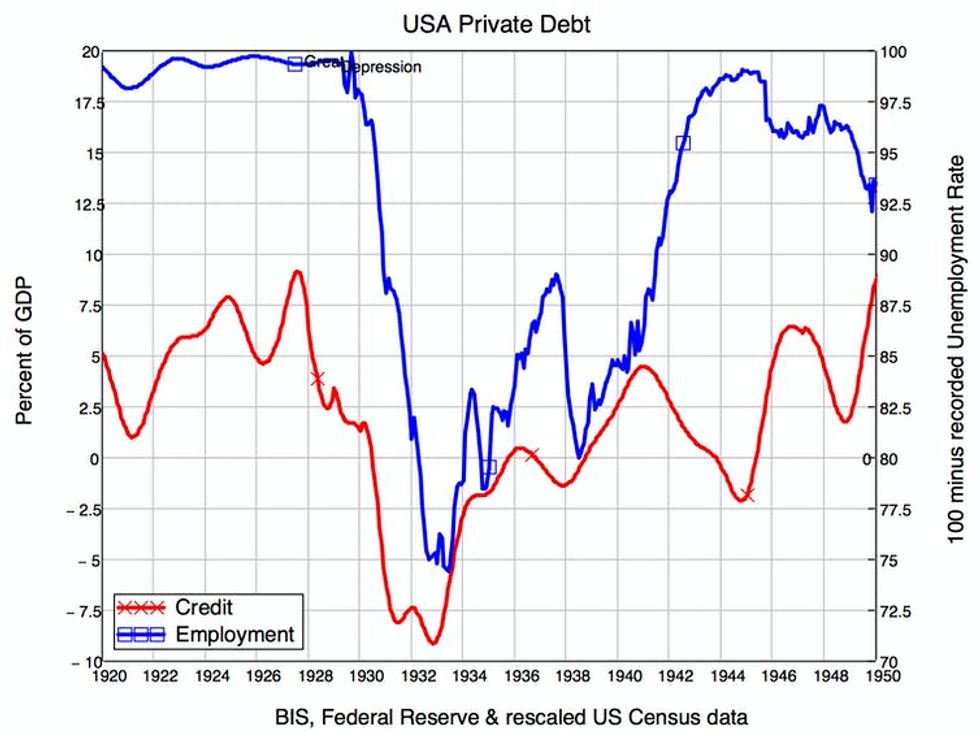 Empirically, this is manifestly untrue, but economists turn a blind eye to this data because it doesn’t suit their preferred model of how banks operate. They model banks as if they are intermediaries that introduce savers to borrowers, not as originators of both money and debt. This deliberate blindness was, in a sense, excusable before the crisis. But it’s unforgivable after it – especially since central banks are actually coming out now and saying that this “Loanable Funds” model is a myth.

Central Banks have therefore learnt something from the crisis, but academic economists are, in the main, trying to go backwards to their defence that this crisis “could not have been predicted”.

In fact, it was predicted, by economists who take banks, debt and money seriously, such as Ann Pettifor, Wyne Godley, and me. Using the same analysis today, I don’t expect a crisis in the US and UK in the near future. I do expect stagnation like that which Japan has experienced since its asset bubble economy burst back in 1990.

There will be revivals and reversals, but not an outright crisis because a prerequisite for that is very high levels of credit. While the overhang of private debt from the last crisis persists, credit-based demand will be anaemic compared to pre-crisis levels.

Instead, crises are likely in countries which side-stepped trouble in 2007 by continuing their private debt bubbles. The pre-eminent candidate here is China, whose credit bubble is easily the fastest growing in the history of capitalism. It will have the company of South Korea, Canada, Australia, Belgium, and a number of others.

So there won’t be another collapse like Northern Rock in the UK or Washington Mutual in the US. But mainstream economists need to quit sticking their heads in the sand over the relationship between private debt bubbles.

The future offers some hope that this is beginning to change. Some prominent mainstreams economists are now doing some serious navel-gazing at their models (people such as ex-president of the Minneapolis Federal Reserve Narayana Kocherlakota, and chief economist at the World Bank Paul Romer). But more likely change will come from central banks, and the new generation of economists such as the students who established the Rethinking Economics movement to address the real issues the world faces.