'I wish you were our president': Colbert reveals he was 'going to have naked men onstage' if Clinton won 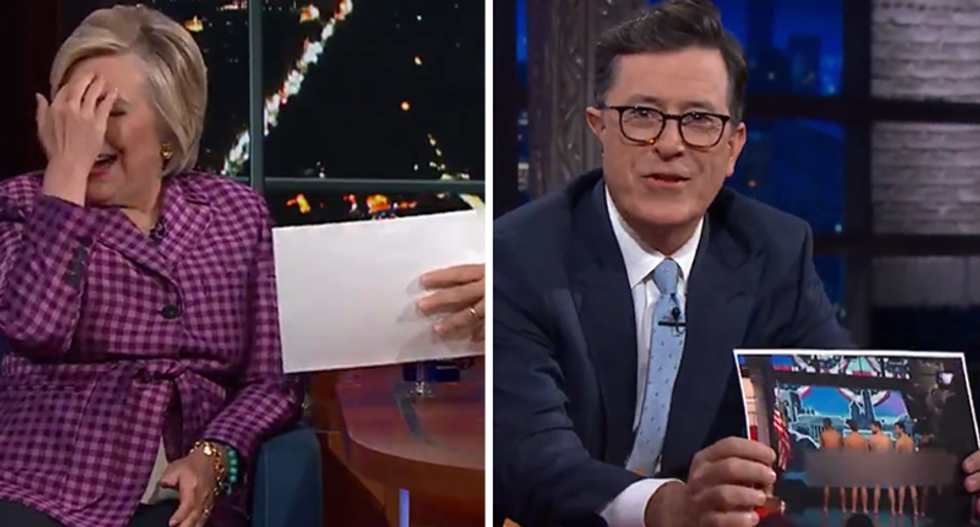 Discussing his Showtime special, Colbert noted he watched the results in realtime before a live audience.

“I was not happy about this,” Colbert said of finding out Donald Trump would be president. “The audience that night was, honest to God, on the edge of tears. It was like we were all at a funeral in this room. And I was drinking a fair amount of bourbon.”

Colbert then handed the former secretary of state a “whole packet of unused Clinton victory jokes,” explaining they planned to include a musical performance featuring pop star Katy Perry that focused on “how men would [now] be relegated to subservient positions.”

“We were going to have naked men on the stage,” Colbert said, showing Clinton a photograph of gentlemen brandishing “I’m With Her” on their butts.

“I wish we could have told those jokes,” Colbert said. “I wish you were our president.”

THE GIFT: Stephen hands @HillaryClinton a dossier of unused 'Clinton victory' jokes from Election Night, with one very cheeky photo inside. pic.twitter.com/44CahJa83a