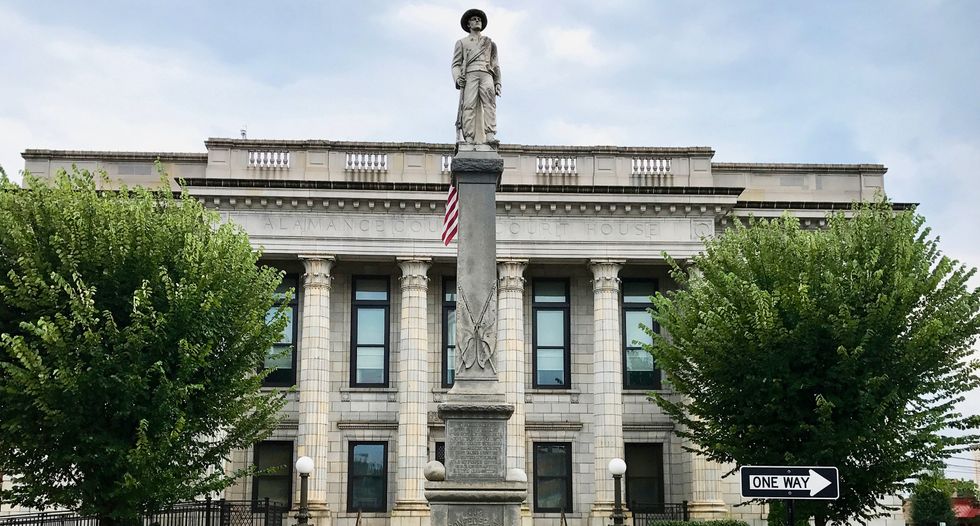 The Alamance County Confederate Monument, erected in 1914, is pictured outside the historic courthouse in Graham, North Carolina, U.S. August 23, 2017. County commissioners said this week they have no intention of seeking the monument's removal, despite such action taken in other cities and counties after the violence in Charlottesville. REUTERS/Colleen Jenkins

Ever since demonstrators in Durham, North Carolina, toppled a bronze Confederate statue from its tower, Bradley Dixon has worried about the fate of a similar monument 30 miles (48 km) west.

The statue honoring 1,100 Confederate soldiers from Alamance County is one of dozens in the country facing renewed calls for removal after violence at an Aug. 12 rally in Charlottesville, Virginia, to protest the planned removal of a statue of Confederate General Robert E. Lee.

Dixon, a 30-year-old descendant of some of those Civil War soldiers, considers the threat a personal affront.

"It is a direct blow at my family, at my blood," Dixon said from the front porch of his 1930s farmhouse, where chickens wander in the yard and he crafts blacksmithing anvils from old train tracks. "I'm not going to watch that monument fall."

Across the U.S. South and beyond, elected officials are stripping signs of the Confederacy from streets, schools and other public spaces, siding with those offended by memorials to the pro-slavery cause.

But in Alamance County, a former textile hub that President Donald Trump won with 55 percent of the vote last November, county commissioners vow the granite and marble Confederate statueerected there more than 100 years ago will stand.

Echoing the Republican president's sentiments about such monuments, the all-white board said the statue commemorated an important part of local history.

Dixon, a white fire department captain whose family was among the county's earliest settlers, grew up hearing about that history at his family's Sunday lunch table.

To him, the monument pays tribute to ancestors who served to protect the powers reserved for states by the U.S. Constitution's 10th Amendment. His relatives were not slave owners, he said, and he insists they did not fight to preserve an institution he calls sickening.

Historians cannot speak to every individual soldier's motivations. But Dixon's pride in his heritage sheds light on why he and likeminded supporters are strident in their defense of symbols others say represent a shameful past.

"My family was called to action and they went," he said. "These men deserve recognition for their sacrifice."

The statue is located outside the historic courthouse in the county seat of Graham, watching over quaint storefronts on Main Street from atop a column engraved with Confederate flags.

It was paid for by the United Daughters of the Confederacy, an organization formed during a postwar period marked by virulent white supremacy and violence against black Americans.

Colonel Jacob A. Long, a Confederate veteran who founded the county's branch of the Ku Klux Klan in 1868, spoke at the statue's May 1914 dedication. He invoked white privilege in his remarks, saying it was important to remember the achievements "of our own race and blood."

"The Alamance County statue appears to be fairly archetypal," said Charles Irons, a history professor at Elon University. "To pretend that this monument erected by private, white-only dollars actually represented the sentiments of all citizens of the county is self evidently not true."

But many local residents in the county, which is 75 percent white, favor keeping such statues. That is in line with national polling on the issue.

Several supporters interviewed said they did not view the monument as a symbol of slavery or racial oppression. But some of those same people said that if it came down, tributes to civil rights leader Martin Luther King Jr. should go, too.

"I don't see why they can memorialize theirs if we can't memorialize ours," said Joseph Harris, a white sign company owner. He noted a local businessman hired him to make a sticker featuring the statue and the message: "I ain't never coming down."

Other residents, both black and white, said they were more concerned about avoiding heated clashes.

The August rally in Charlottesville, which was organized by white nationalists, turned deadly when a woman was killed after a man drove into a crowd of counter-protesters.

"Tearing it down causes division, and I think as a community we should just try to keep things peaceful," said Brittany Parrish, 24, a black line cook at a coffeehouse. "It's not doing anybody harm."

Dixon said none of the statue supporters he knows had anything to do with the events in Virginia or with hate groups such as the KKK, which he denounces.

"All the hatred, it's not necessary," he said. "There's not enough love anymore."

Although he has stood guard to protect the Alamance County statue from protesters in Charlottesville's aftermath, Dixon prefers a quiet life with longtime girlfriend Emily Mason on their 11-acre (4-hectare) property dubbed Mason-Dixon Farm.

Mason's ancestors also fought for the Confederacy, but she did not grow up steeped in that history and said she could see both sides of the debate. Dixon's passion for his family's legacy, however, has convinced her the statue should stay.

"It's everything to him," she said.