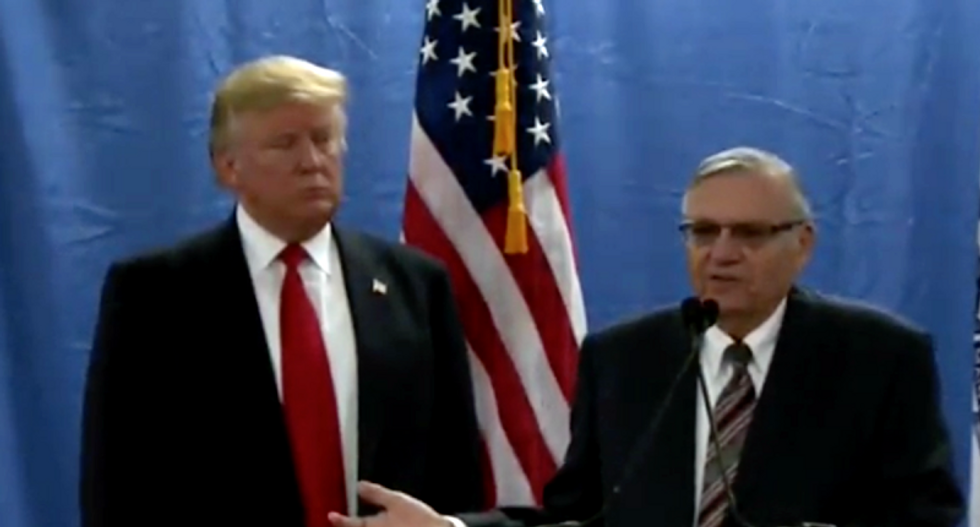 The Department of Justice on Monday filed a court briefing asking a federal judge to throw out a criminal contempt case against Joe Arpaio, as an advocacy group moves to challenge Donald Trump’s unconditional pardon of the former Arizona sheriff.

"A pardon issued before entry of final judgment moots a criminal case because the defendant will face no consequences that result from the guilty verdict,” the DOJ wrote in a court filing to U.S. District Judge Susan Bolton. "Accordingly, the government agrees that the Court should vacate all orders and dismiss the case as moot.”

“The President’s decision to grant Defendant a ‘[f]ull and [u]nconditional [p]ardon [f]or [h]is [c]onviction’—and Defendant’s decision to accept it—ends this prosecution,” the DOJ added. “The presidential pardon removes any punitive consequences that would otherwise flow from Defendant’s non-final conviction and therefore renders the case moot.”

The DOJ’s filing is a stark reversal from the department’s previous efforts to prosecute Arpaio for criminal contempt of court after he ignored a judge’s orders in a racial profiling case. In 2011, the DOJ concluded Arpaio “oversaw the worst pattern of racial profiling by a law enforcement agency in U.S. history,” the Pheonix New Times reports.

Trump in August issued the first pardon of his presidency for Arpaio, including the contempt of court conviction and “any other offenses” that may arise. Judge Bolton has yet to dismiss the case, though she did cancel Arpaio’s sentencing, which was scheduled for Oct. 5.

The advocacy group Roderick and Solange MacArthur Justice Center on Monday also sought to file an amicus brief challenging the president’s pardon, Politico reports. The move “has the purpose and effect of eviscerating the judicial power to enforce constitutional rights,” the brief argued.

The brief, which Judge Bolton denied on procedural grounds, also warned the “text of the pardon is so broad that it purports to allow Arpaio to run for Sheriff again...and escape criminal liability for future contempt.”