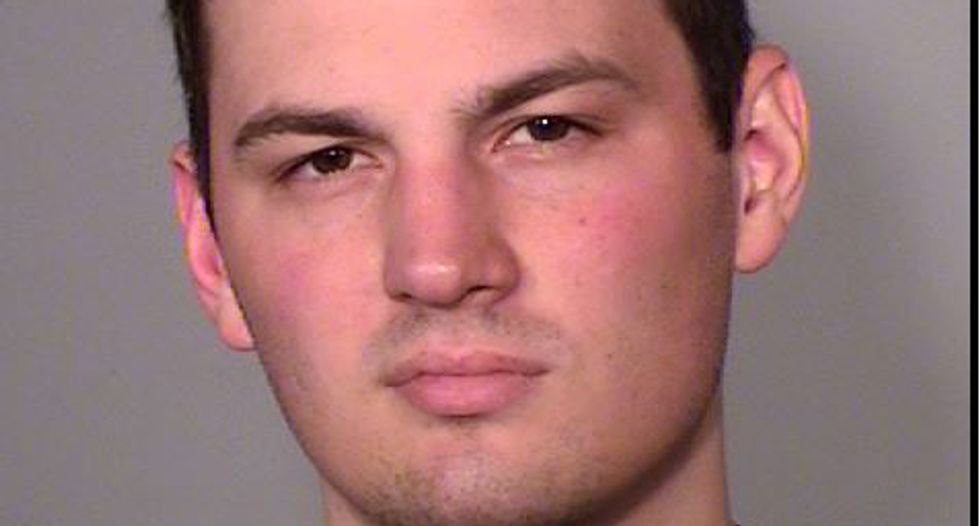 A Minnesota man was arrested on Wednesday after he accidentally shot himself in the arm—then told police he was attacked by an armed “black male.”

Brent Patrick Ahlers, a 25-year old security guard at St. Catherine University, shot himself in the shoulder Tuesday night, prompting a campus-wide lock-down and building-to-building school sweep, City Pages reports. Authorities conducted an “exhaustive” search for the suspect after Ahlers told police a “black male” was responsible for his injury.

A local police scanner monitor reported authorities were searching for a “black male, navy blue sweatshirt with the word "Navy" on it., black jeans and a short afro.”

"It had basically 1,800 students held captive in their dorm rooms at St. Catherine's, it had residents of the Mac-Groveland and Highland Park communities fearing they would be hurt in their homes," Sgt. Mike Ernster said Wednesday night.

St. Paul Police eventually called off the search after they failed to locate the suspect. It wasn’t until the following day that Ahlers admitted he pulled the trigger “while handling a gun he wasn’t supposed to have on campus,” according to City Pages. The security guard was reportedly afraid of losing his job.

Ahlers has been charged with falsely reporting a crime.

“I was angry that he subjected the entire neighborhood to this huge police presence, that people were afraid being out and about,” she said, noting Ahler’s false reporting tapped “into people’s racism.”