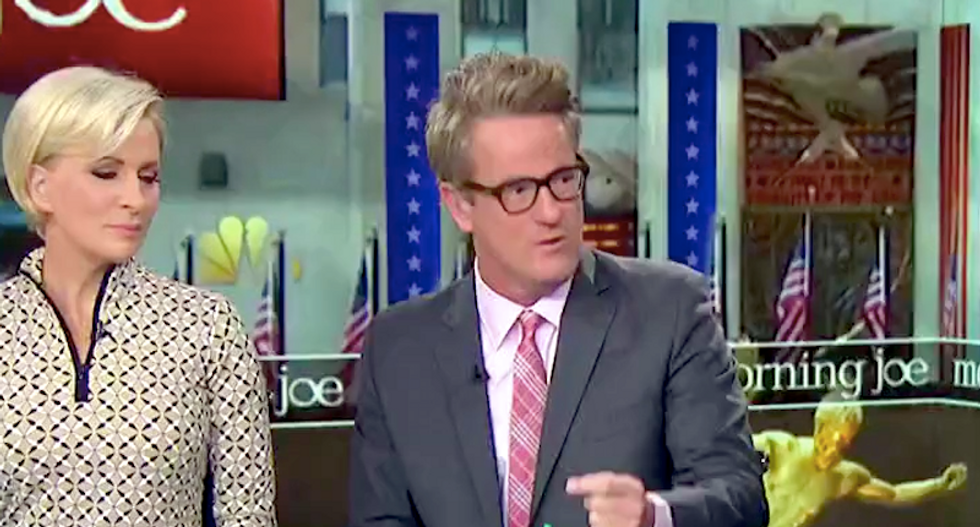 MSNBC's Joe Scarborough tried to imagine the reaction if Democrats had passed the Affordable Care Act the same way Republicans are, once again, trying to pass a deeply unpopular replacement.

The "Morning Joe" host guessed only about 14 percent of Americans approved of the "absolutely terrible" health care bill proposed by Sens. Lindsey Graham (R-SC) and Bill Cassidy (R-LA), and he questioned why they were rushing the measure through.

"They just never learn, it's really incredible," Scarborough said. "I talk about putting your hand on the hot stove. Yeah, we have been mocking Donald Trump for doing what only 33 percent of the country wants -- which by the way, his approval rating's gone up three weeks in a row for the first time."

Scarborough consistently criticized the former White House chief strategist for crafting messages that appealed only to Trump's base, and he said GOP lawmakers were targeting an even smaller segment of the public.

"The Republicans, they're not on Steve Bannon's 33 percent plan," he said. "They're on their own 17 percent plan. Every one of these health care bills are horrible, every one is worse than the last."

He blasted Republicans for rushing health care bills to a vote without having them scored by the Congressional Budget Office, and he said it violated the fundamental principle of conservatism.

"It's unbelievable the so-called conservatives saying we're going to reorder one-sixth of the economy and have absolutely no idea of the impact it's going to have on all of America, on their health care -- it is the most radical thing anybody can do," Scarborough said.

Republicans have set a Sept. 30 deadline to vote on the Graham-Cassidy measure, without bothering to hold hearings or give the public much opportunity to see how the bill would impact their health care.

"How can you vote for something that, once again, has all the worst qualities of the last health care bill?" Scarborough said. "Imagine -- you know, we always play this game -- what if Democrats had done what Republicans have done? Imagine what the press would say."

"Imagine if the Democrats had tried to pass a bill in seven or eight days reordering one-sixth of the economy and rush through it without a Congressional Budget Office," he added. "Republicans, right-wing radio, everybody on the far right would be going absolutely ballistic right now."