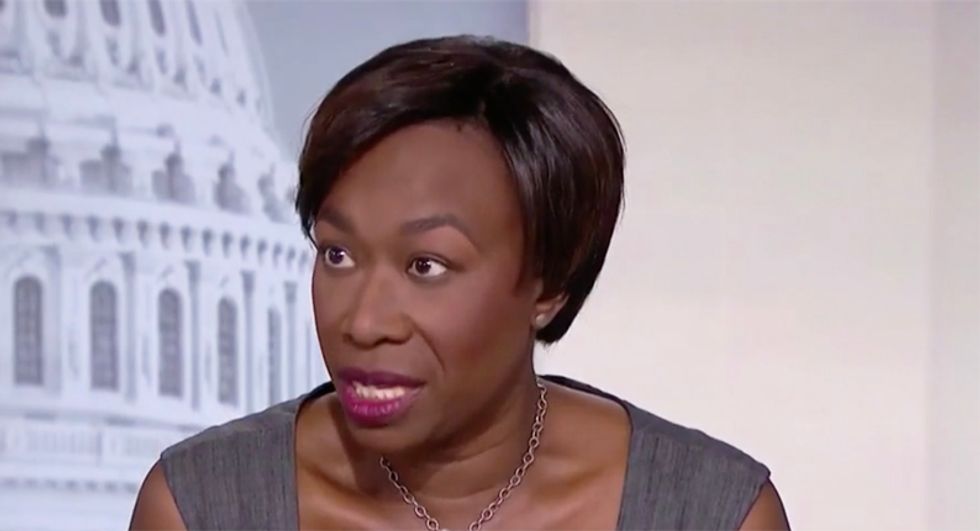 Trump's comments on Kaepernick have been condemned by the NFL Players Association and even by NFL Commissioner Roger Goodell.

"For the first time, Roger Goodell actually stood up for the players," MSNBC contributor Jason Johnson told MSNBC anchor Joy Reid. "I think this is the only time he's done this in his time as a commissioner."

"Colin Kaepernick was taking a knee before Donald Trump got elected, Stephen Curry recognizes that going into the White House validates and normalizes this president," Johnson continued. "And Jemele Hill was just being excellent as she usually is in telling the country what we already know, is that our president sympathizes with white supremacists."

"At the end of the day, this is a president who is incapable of functioning under criticism, especially from people of color," Johnson concluded.

Reid noted that ESPN anchor Jemele Hill was "unbossed and unbowed" as she defended Kaepernick, tweeting that President Trump's "comments will only incite more player protests."

Just so we're clear: the president's comments will only incite more player protests, not quell them.
— Jemele Hill (@Jemele Hill) 1506143373.0

The additional player protests include NBA star LeBron James calling the President a "bum" for his uninviting Stephen Curry to the White House months after Curry publicly rejected the invitation.

U bum @StephenCurry30 already said he ain't going! So therefore ain't no invite. Going to White House was a great honor until you showed up!
— LeBron James (@LeBron James) 1506179844.0

Former Breitbart media consultant Kurt Bardella said that while campaigning for interim Sen. Luther Strange in Alabama, President Trump, "managed to fall into a culture war that overshadows why he was there in the first place in calling out NFL players and now today, calling out Steph Curry -- one of the most popular players on the planet."

"Who I'm sure is just devastated he doesn't get to hang out with Donald Trump -- black athletes and celebrities of all kinds are just dying to go to the White House and hang out with him," Reid said, to laughter.

"Just look at the optics here, he keeps going after players of color and people of color," Reid noted. "There's something kind of low comedy about it, but there's also something low-key sinister about what Donald Trump is saying."

"He's probably thinking, 'why didn't I support the bigot' he's like 'Gorka, the Nazi supports the other guy' and you have the white supremacists...Bannon supports Moore," Jean-Pierre explained. "He supports white supremacy -- clearly -- because he sees all those folks who were at Charlottesville as 'fine people' but if you take a knee and have a peaceful protest, you need to get fired and thrown off the field."

In fact, some are suggesting that Trump may have violated federal law by seeking to influence an employment decision of a private entity. If convicted under 18 U.S. Code § 227, Trump could be imprisoned for 15 years and receive a lifetime ban from holding public office.

"Can you imagine all the parents across the country who have to ban their kids from watching the President of the United States speak, because he says misogynistic, bigoted things?" MoveOn's Jean-Pierre asked.