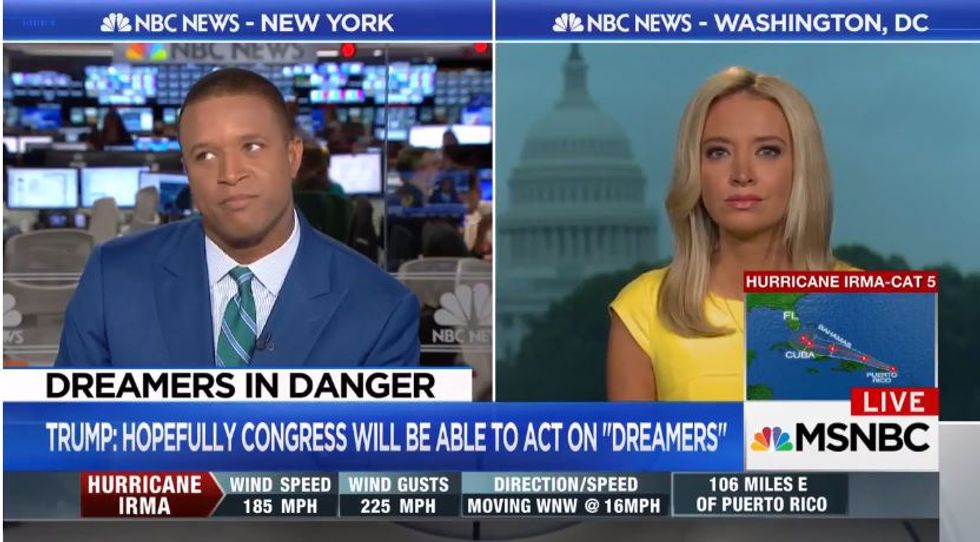 Like many other members of her party, Republican National Committee spokeswoman Kayleigh McEnany plugged the GOP's talking point that the Obama-era Deferred Action for Childhood Arrivals order is "unconstitutional" during a Wednesday MSNBC interview.

And like many of her fellow Republicans, McEnany was smacked down -- this time by host Craig Melvin for the seeming hypocrisy regarding another recent Trump administration executive order.

"The decision [the rescind DACA] announced yesterday comes, of course, after President Trump pardoned convicted criminal, Sheriff Joe Arpaio," Melvin said. "Why was Sheriff Arpaio worthy of leniency, and not the people who were brought here by their parents, many of them who are at a very young age?"

"I think the president appreciated the fact that Joe Arpaio tried to implement the law," McEnany replied.

She then said that while "most illegal immigrants are good people, just wanting to make a life in this country," others, like a woman she'd met whose son was killed in a hit-and-run accident with an undocumented perpetrator who "was not supposed to be here."

"The example that you just gave, albeit very tragic -- that's the exception and not the rule," Melvin rebutted.

"You cite the fact that he was trying to enforce the law, but there have been myriad examples over the years where Sheriff Arpaio did not do that," he continued. "Whether it was a woman who was forced to give birth while she was in shackles, or whether it was mocking undocumented immigrants."

Watch the entire exchange below, via MSNBC.