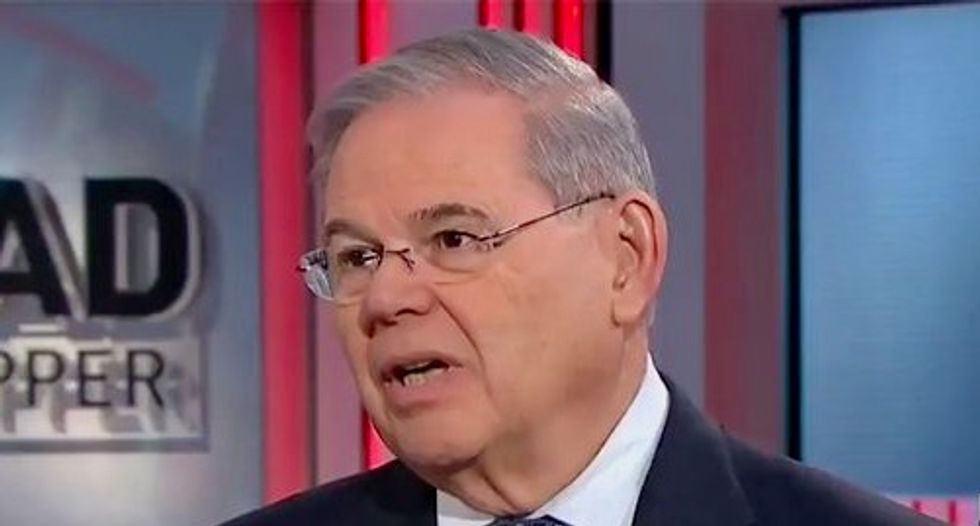 More than two years after U.S. Senator Bob Menendez was indicted on federal corruption charges, the New Jersey Democrat finally faces trial next week in a case whose verdict could sway the balance of power in Washington.

Menendez, 63, is accused of taking bribes, including luxury trips and campaign contributions, from a wealthy patron since shortly after he was first elected to the Senate in 2006.

He has denied any wrongdoing, and his lawyer, Abbe Lowell, said in a statement that the senator"is in good spirits, has faith in the American system of justice, and is confident that when all the facts are heard, he will be vindicated."

Menendez is running for re-election next year despite the charges.

If he is convicted, he would face significant pressure to resign, and the Republican-controlled Senate could seek to expel him.

His replacement, at least until January, would be named by New Jersey Governor Chris Christie, a Republican and ally of President Donald Trump. That would add to the Republicans' 52-48 Senate majority only months after their bid to repeal former President Barack Obama's signature healthcare law failed by a single vote.

Christie cannot run for re-election due to term limits, and polls suggest Democratic candidate Phil Murphy is likely to succeed him in January.

Senate rules do not require that a convicted member resign, and only a two-thirds vote, which would need the support of more than a dozen fellow Democrats, could force Menendez from office.

The last sitting senator to be convicted of corruption at trial, Harrison Williams, also of NewJersey, refused to step down after a jury found him guilty in the "Abscam" scandal in 1981.

Williams did resign, however, after it became clear the Senate was about to vote to expel him.

Menendez's trial is among the first high-profile cases to test a key U.S. Supreme Court decision last year that narrowed the grounds on which federal prosecutors can pursue bribery charges against elected officials.

Menendez's lawyers have urged U.S. District Judge William Walls to throw out the case based on that decision. But the judge has said he will not make a ruling until after prosecutors have presented their evidence at trial.

In court papers, U.S. prosecutors have described a years-long bribery scheme between Menendez and Salomon Melgen, a Florida ophthalmologist.

Melgen, 63, was convicted earlier this year in a separate case of defrauding Medicare of more than $90 million through illegal overbilling. His sentencing has been put off until after Menendez'strial.

Prosecutors say Melgen flew the senator on his private jet several times to an exclusive Dominican Republic resort. On one occasion, according to court documents, Menendez had Melgen book him a luxury suite at an expensive Paris hotel.

In addition, Melgen gave more than $700,000 to Menendez's legal defense fund and various campaign committees that supported his re-election bid in 2012, prosecutors say.

In exchange, Menendez sought to help Melgen's foreign girlfriends obtain visas and tried to pressure the U.S. State Department to intervene in a contract dispute between a company Melgen owned and the Dominican government, authorities say.

Menendez also attempted to get Medicare to change its reimbursement policy after the agency concluded Melgen owed millions of dollars in overbilling and arranged meetings with high-level officials to ask for assistance, according to the charges.

Based on court documents, Menendez's lawyers are likely to argue that his actions were based on sound policy reasons and that the trips were a result of his long friendship with Melgen.