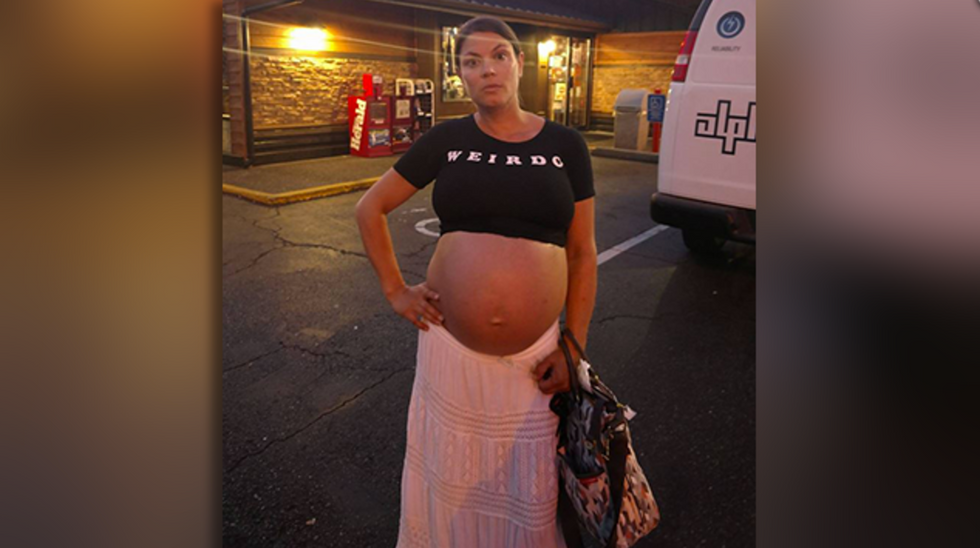 Charisha Raylee Gobin, a Washington woman denied service for wearing a crop top to a restaurant (image via Gobin/Facebook).

A Washington woman was denied service over Labor Day weekend for wearing a crop top while seven-and-a-half months pregnant with twins.

According to the Tacoma News Tribune, Charisha Raylee Gobin was kicked out of Marysville, Washington's Buzz Inn Steakhouse for wearing a top that exposed her pregnant belly -- an act a waitress told Gobin violates the restaurant's "no shoes, no shirt, no service" policy.

Gobin took a photo in the restaurant's parking lot of the offending outfit, and posted it to Facebook. The now-deleted post soon went viral in the region.

"I was just denied service at the Buzz Inn on State Avenue in Marysville for my outfit," Gobin wrote in her post. "I was violating the health code."

"We sincerely apologize for the misunderstanding and will cover with all staff as to how to not overly enforce a rule that is intended to make all guests feel comfortable," the Buzz Inn's post reads. "The server in question has been with our company and a great employee for almost 20 years and was trying to use her best judgement and by no means was trying to be demeaning to the guest. Again our sincere apology for misunderstanding."