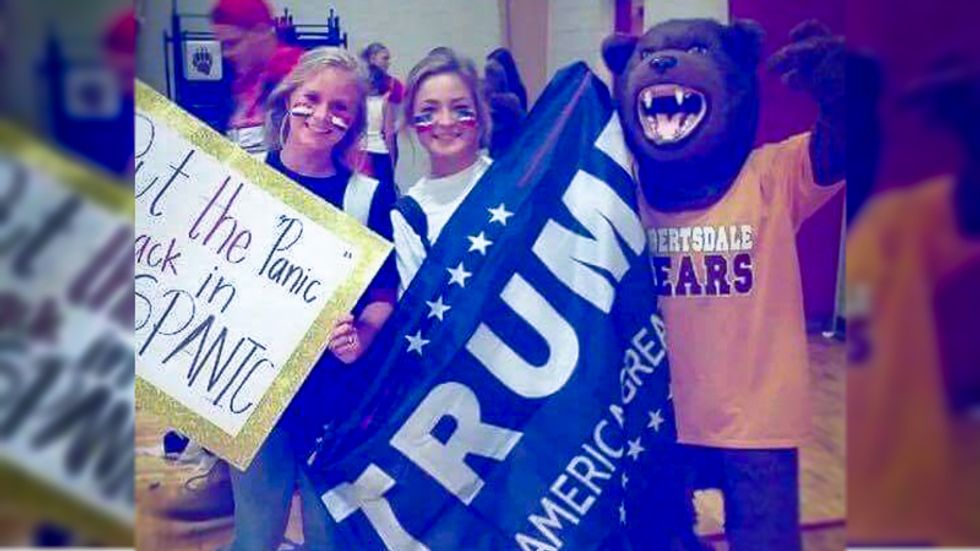 An Alabama high school student apologized over the weekend after a photo went viral of her holding what appeared to be a racist anti-Hispanic sign at a pep rally.

WALA reported that an unnamed Robertsdale High School student was photographed holding a sign that says, "Put The Panic Back In Hispanic." In the same photo, another student is holding a large sign, reading, "Trump: Make America Great Again."

Just pathetic. Robertsdale High. 'Put the panic back in Hispanic.' The hate is definitely filtering down to the kid… https://t.co/pDWdrkR9by
— Josh Moon (@Josh Moon) 1505590345.0

"As a former student and class president of #RobertsdaleHighSchool I am deeply hurt and confused as to why this was accepted as acceptable at a public high school," Krystal Austin Moore wrote on her Facebook page. "A Hispanic classmate of mine sent me these images and I don't find this humorous on any level."

One student who is currently attending Robertsdale, Jennifer Lopez Vazquez, noted that the students holding the signs "know it's Hispanic Month."

In a statement, the school said it was aware of the photo.

"We are aware of a photo that appears to be taken at a Robertsdale High School football pep rally Friday Sept. 15 that is circulating on social media containing political banners and unacceptable language," the statement said. "School administrators, as well as my office, are following up on the matter."

On Sunday, the girl who was seen in photo with the offensive sign explained in an email to WKRG that the message was not intended to be racist.

"I had the sign that said 'Put the "panic" back in Hispanic,'" she admitted. "I would like to inform you that, that wasn’t my intention and was not meat for it to be taken that way."

The student pointed out that Robertsdale was playing Spanish Fort Toros and the sign was directed at the opposing team, not Hispanics in general.

"I do apologize for making our school look bad and I do understand any consequences I must face," she said in the email. "But I also believe in my right of speech. I did not mean it in any kind of racial way, half of my family are Hispanic."

It was not immediately clear if the student would be disciplined for the incident.

Watch the video below from WJRG.