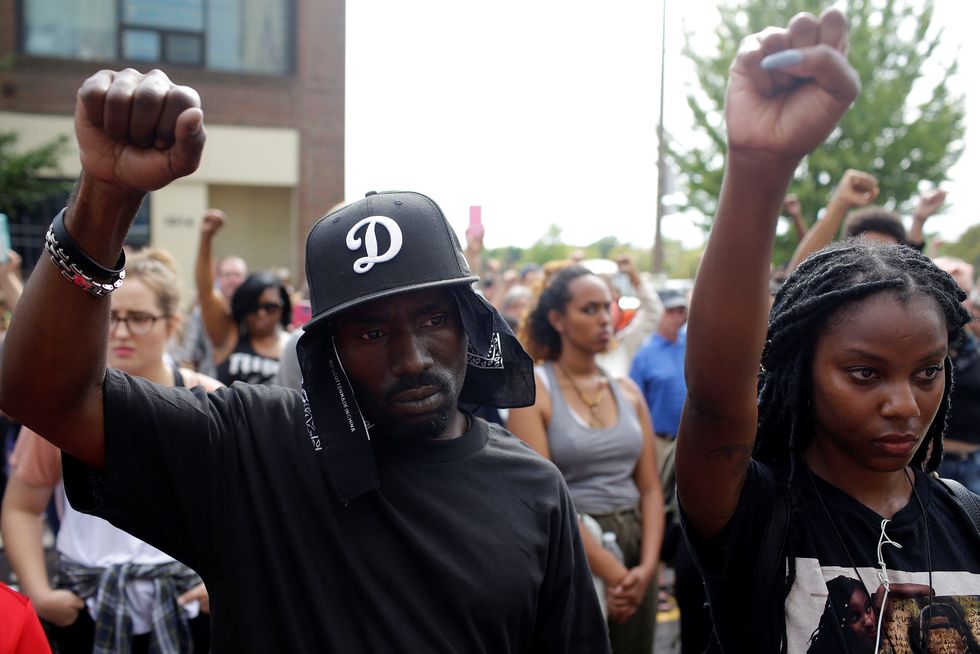 People continue to march after the not guilty verdict in the murder trial of Jason Stockley, a former St. Louis police officer charged with the 2011 shooting of Anthony Lamar Smith, in St. Louis, Missouri, U.S., September 17, 2017. REUTERS/Joshua Lott

Demonstrators gathered in central St. Louis for the third straight night to protest the acquittal of former police officer Jason Stockley, 36, of first-degree murder in the 2011 shooting death of Anthony Lamar Smith, 24.

As it had on Friday and Saturday nights, the protest started peacefully but turned disorderly after dark. Demonstrators broke windows and attempted to block a ramp to an interstate highway, police and witnesses said. Police also reported confiscating weapons including at least one handgun from protesters.

The violence evoked memories of the riots following the 2014 shooting of a black teenager by a white officer in nearby Ferguson, Missouri.

Police confiscated plastic spray bottles containing an unknown chemical that was on officers, who were then decontaminated, police said.

"This is no longer a peaceful protest," St. Louis police said on Twitter, adding that one officer was injured.

Sunday's gathering was the largest of the three nights with more 1,000 protesters. Police in turn deployed their largest show of force.

Officers in riot gear marched through the streets. Others in large vehicles ordered people to leave over a loud speaker.

"Do they think this will make us feel safe?" said Keisha Lee of Ferguson, shaking her head.

Police ordered a group of news photographers to stand up against a wall. One of them was Kenny Bahr who was working on assignment for Reuters. He posted the incident live on Facebook until he was placed in handcuffs when he turned off his video. The photographers were released after about 30 minutes.

Earlier in the evening, a handful of demonstrators threw bottles in response to a police officer making arrests, the first indication that the protest could turn violent.

Protesters broke large ceramic flowerpots at the entrances to several downtown buildings. A few took chunks of the ceramic and hurled them at windows, drawing in the police.

The protests began on Friday shortly after the acquittal on Friday, when 33 people were arrested and 10 officers injured, police said.

Violence flared anew on Saturday night when about 100 protesters, some holding bats or hammers, shattered windows and skirmished with police who were in riot gear, resulting in at least nine arrests.

More serious clashes broke out in 2014 in Ferguson, a suburb of St. Louis, following the killing of 18-year-old Michael Brown by a white police officer who was not indicted.

The Ferguson protests gave rise to Black Lives Matter, a movement that has staged protests across the United States.

An informal group known as the Ferguson frontline has organized the protests, focusing on what it describes as institutional racism that has allowed police to be cleared of criminal wrongdoing in several shootings of unarmed black men.

"Windows can be replaced. Lives can't," said Missy Gunn, a member of Ferguson frontline and mother of three children including a college-age son. She said she feared for him every night.

As activists marched through central St. Louis, drummers set the beat for the chant: "If we don't get no justice, y'all don't get no peace."