Smoking gun?: Maddow pinpoints a massive missing link in the flurry of Trump firings and resignations 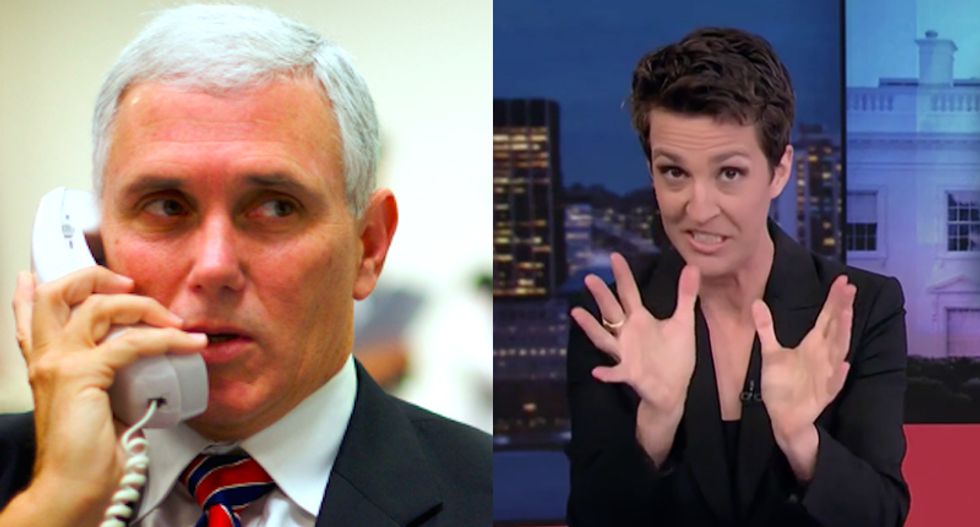 In President Donald Trump's White House, all roads are said to lead to Russia, to his son-in-law and adviser Jared Kushner and...to Vice President Mike Pence?

According to MSNBC's Rachel Maddow, "Pence has been caught out in way more of these scandals than his bland Beltway press coverage would have you believe."

Pence, as Maddow noted on Friday night, was head of the presidential transition -- and was also the recipient of a letter from Congress warning that the Flynn "was on the payroll of foreign governments" and an in-person visit from the former general's lawyers with the same information.

"Pence insisted -- insisted -- that there were no contacts at all between the Trump campaign and Russian officials during the campaign," she said. "That of course, was not true, either."

He also was the first to claim that former FBI Director James Comey was fired due to an "internal process" a day prior to Assistant Attorney General Rod Rosenstein's bogus excuse went public.

"It had nothing at all to do with the White House's needs or desires and the president's feelings about the Russia investigation," she said, jokingly summarizing Pence's first letter.

The vice president and his rumored falsehoods have long been a fascination of Maddow's. Earlier this year, she rightfully blasted Pence's claim that he was unaware of Flynn's contact with Turkish officials. In May, she guessed correctly that he must have known about the fired adviser's vulnerability to Russian compromise after (fired) former acting Attorney General Sally Yates testified before Congress. And just last week, she said Pence "has stuff to worry about" when it comes to his long string of lies and Special Counsel Robert Mueller's investigation.

Watch Maddow detail the vice president-sized hole in many of the Trump White House's biggest scandals below, via MSNBC.