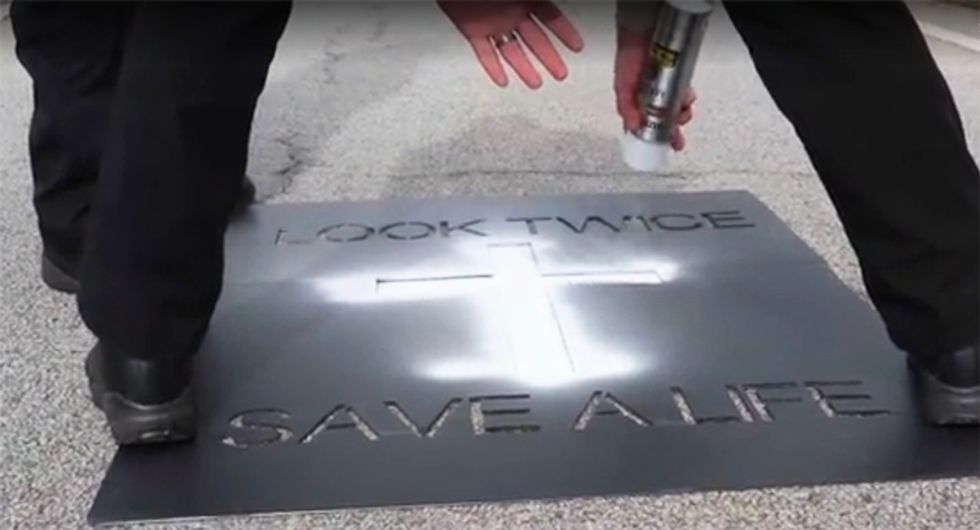 A South Carolina coroner is under fire for instructing road maintenance employees to mark the locations of traffic fatalities with a spray-painted Christian cross.

According to The State, Lexington County Coroner Margaret Fisher recently restarted the old practice of painting white crosses at the site of roadway fatalities that began back in the late 1980's. The report states that Fisher is not alone among county coroners, and that has raised the ire of watchdog groups worried about the intersection of religion with government.

“Painting these crosses is like a memorial to the families,” explained Fisher. “But it also serves as a reminder and encourages safer driving. You’re driving down the road, you see the white cross. It’ll bring awareness to the fact that, ‘Hey, somebody died at this location. Maybe I need to pay attention. Maybe I need to slow down.’”

The coroner notes that supplies for the cross-painting are donated and that families are alerted to the plans.

“We let the families go through the grieving process before we bring up the fact that we are going to paint a cross,” Fisher said, saying that, if families balk at the idea, staffers have an alternate explanation.

“If for some reason they don’t want us to paint it, then we’re not going to do it,” she admitted. “We tell them you can think of the cross as a lower-case T that stands for ‘traffic accident.’”

According to the Freedom From Religion Foundation, they have received complaints about the policy and have voiced their objections to Fisher and other state employees.

“Nearly 30 percent of Americans are non-Christians, either practicing a minority religion or no religion at all,” wrote attorney Patrick Elliott. “The use of a sectarian symbol to mark the site of a tragic event is not inclusive of all of those who have suffered a loss,” adding that the policy violates the First Amendment and state highway laws.

“We certainly think it’s inappropriate and unconstitutional for a government official to be painting a Christian cross on state roads, and we think it should be stopped immediately,” Elliott said in an interview.

According to Aiken County Coroner Tim Carlton, who also has the crosses painted, he sees no conflict.

“It’s something I think Aiken County citizens have come to expect,” he explained. "“It’s just a reminder to the motoring public that a tragic event happened there.”

You can watch the video below via The State: