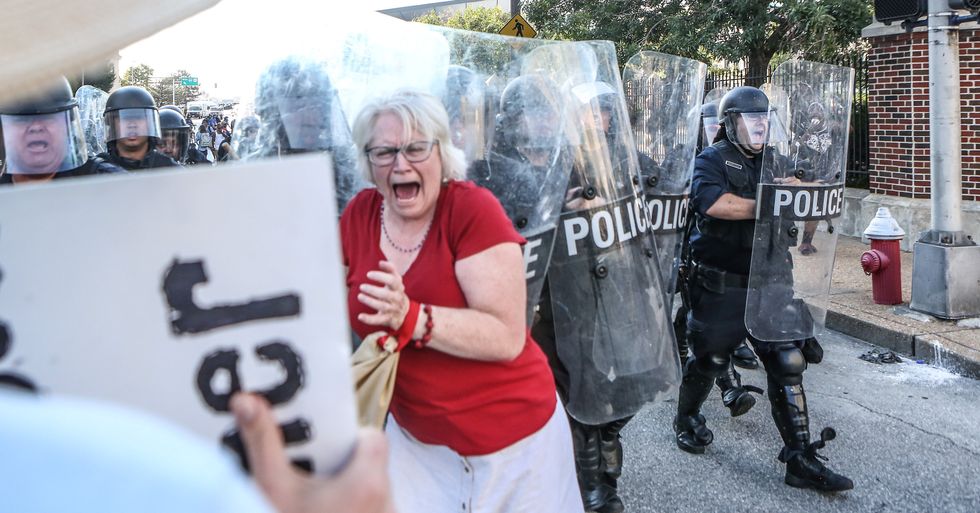 St. Louis police are investigating whether some of its officers chanted, "Whose streets? Our streets" during protests by people upset over the acquittal of a white former policeman who killed a black man.

Protests entered a fourth day on Monday after three nights of arrests and scuffles with police. More than 80 people were arrested late Sunday, when police in riot gear used pepper spray and detained demonstrators who defied orders to disperse following larger, peaceful protests.

A St. Louis Post-Dispatch photojournalist, David Carson, tweeted that he and others heard some officers chant, "Whose streets? Our streets," commandeering a refrain used by the protesters themselves.

A grainy video circulating online shows a group of officers and the chant can be heard. Carson said he spoke to a police commander at the scene who said any such chant would be unacceptable and he would deal with it.

The protests followed a judge's ruling on Friday finding the former officer, Jason Stockley, 36, not guilty of first-degree murder in the 2011 shooting death of Anthony Lamar Smith, 24.

The clashes evoked memories of riots following the 2014 shooting of a black teenager by a white officer in nearby Ferguson.

"The Department is aware of the video circulating on social media, and is reviewing the footage," police spokeswoman Schron Jackson wrote in an email to Reuters. "We hold our officers to the highest standards of professionalism and any officer not meeting those standards will be held accountable."

Such actions could only inflame tensions, said Nicolle Barton, executive director of the St. Louis police civilian oversight board, which is also investigating. "Certainly we do not want that to be taking place," she said.

The Ethical Society of Police, a group of black St. Louis police officers, tweeted on Monday there was "No need 2 chant."

While most protests were peaceful, some turned violent at night with some people in the streets carrying guns, bats and hammers.

"We're in control, this is our city and we're going to protect it," acting police commissioner Lawrence O'Toole said on Monday.

The U.S. Justice Department said on Monday it had decided a year ago there was insufficient evidence to pursue federal civil rights charges against Stockley. It held off announcing the decision to avoid influencing the trial, it said.

(Reporting and writing by Chris Kenning in Chicago; Editing by Ben Klayman and Matthew Lewis)