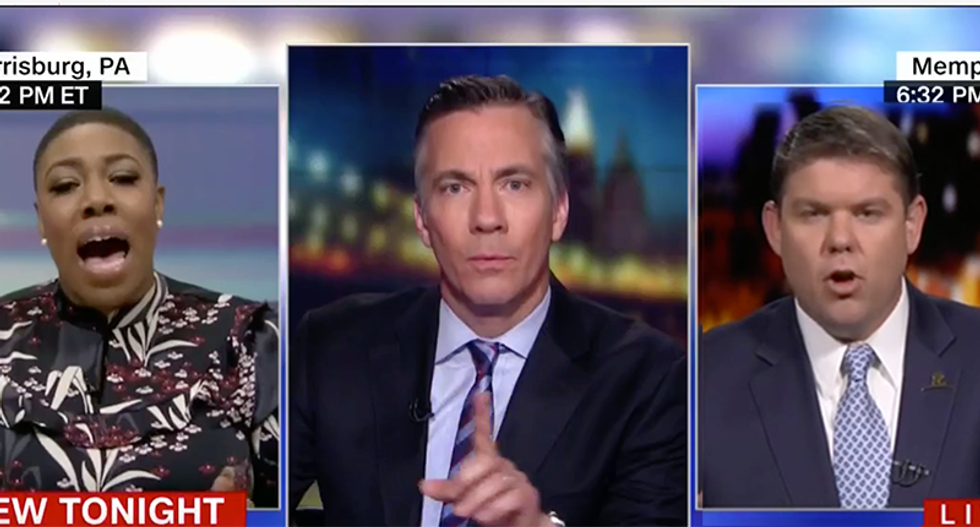 Conservative Ben Ferguson claimed that President Donald Trump's war against NFL players has nothing to do with race, but Symone Sanders wasn't having it.

In a CNN discussion Friday, Ferguson first claimed that the NFL has a rule that prevents the players from "disrespecting the flag" the way that he says they have done. Sanders disagreed, saying she read the rule book and that there are rules with penalties and there are "policies." According to her, this is classified as a policy, and as such doesn't have a mandated rule with official NFL consequences attached.

"I think the president of the United States of America was right to call them out," Ferguson said. "When he used the term SOB, that polarized a lot of people and took away from his point. When you see the majority of Americans saying it's wrong to protest during the national anthem, that's where they're backing the president. When they made it personal, it seems there's more divide there."

"I want it to be clear: the whole reason we have known, the only reason Donald Trump felt the need to weigh in is because players were engaging on the issue and that's police brutality and justice, racism and white supremacy in this country," Sanders explained. "They were calling attention to it. No different than wearing pink during October to highlight the issue of breast cancer."

Ferguson cut in to claim it was completely different.

"We're talking about black people in this country!" she exclaimed.

Scuitto tried to cut in as the two panelists went at each other. He tried to explain that Sanders raised a fair point about it being tied to race because players participating in the protest prior to Trump weighing in, was about police brutality. The overwhelming majority of the players protesting were people of color. Additional players began participating in defense of their teammates being criticized by the president.

Ferguson continued to attempt to make it about the flag, not the anthem, or the original intent of the protests.

"Again, I said I don't think he should have said that and saying that the NFL owners need to get their players in line -- if that's not a racist dog whistle, I don't know what is," Sanders closed.

Symone Sanders lights up Ben Ferguson for claim... by sarahburris