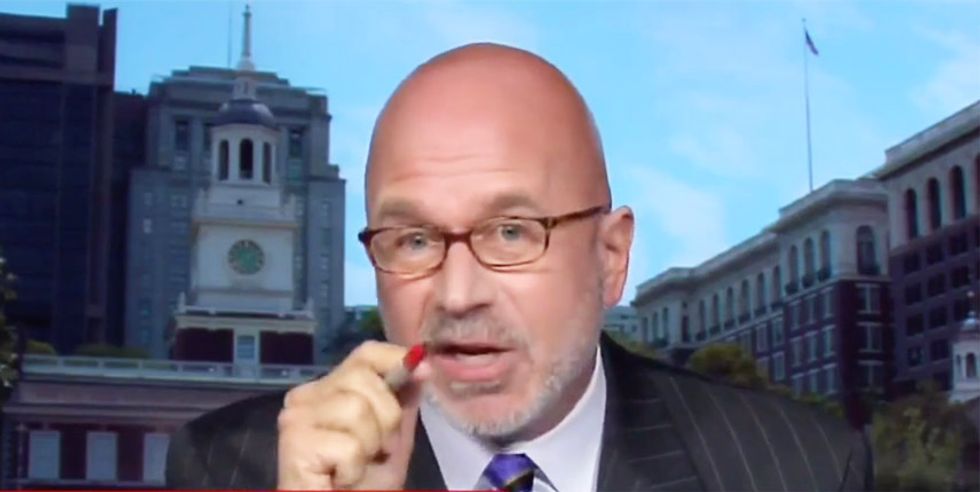 A discussion about the war between the White House and ESPN host Jemele Hill -- who called President Trump a "white supremacist" -- normally amiable CNN host Michael Smerconish blew up on former major league pitcher Curt Schilling who attacked the ESPN personality before complaining about the manner in which he was fired from the sports network.

Invited on to talk about the controversial comments Hill made, Schilling began by saying he wasn't fired by ESPN for comments he made while employed by the network, but because he is a conservative.

"She shouldn't be fired," Schilling began before saying he personally would fire Hill. "I would have never hired her. She has no place in any platform that represents sports. I think she's openly racist."

Schilling that launched into a diatribe against CNN, saying, "CNN has been at the vanguard from everything from the dossier, to calling Trump a white supremacist, time after time, anchor after anchor with no validation."

"I'd love on a different day to litigate each one of the points that you just made here, because there's a response for each one of them," Smerocnish shot back. "Instead, what I'll do is, I'll respond to you by saying you were fired for being a conservative, but put back on the screen that Facebook post that Curt Schilling cherry-picked a photograph and you used it to besmirch an entire class of individuals. That's why you got fired. Do you want to have that conversation, because we'll have it?"

"Not true, Mike. I didn't besmirch an entire group of people," the former big leaguer parried.

"Of course, you did!" the CNN host fired back. "Do you think that the image that's on the screen is typical of the transgendered among us? Seriously?"

"No, I never said it was. That wasn't my picture --," Schilling said defensively.

"By indication, you did, it was a cheap shot," said Smerconish.

"Right, I understand that's how you guys work, I get it," an angry Schilling complained. "You guys work on getting ratings, you need to be bombastic and you need to make assumptions for the viewers because you guys operate on the notion that we're too stupid to speak for ourselves. The fact of the matters is, my comment was around the fact I don't need my government to tell me where to pee."

Then Smerconish let Schilling have it.

"You know what?  You were pompous in Philly and you're pompous today," the furious Smerconish exclaimed. "You come on my program and make wild assertions, none with specificity relative to me and my program," before lecturing Schilling on the conservative values of taking personal responsibility.