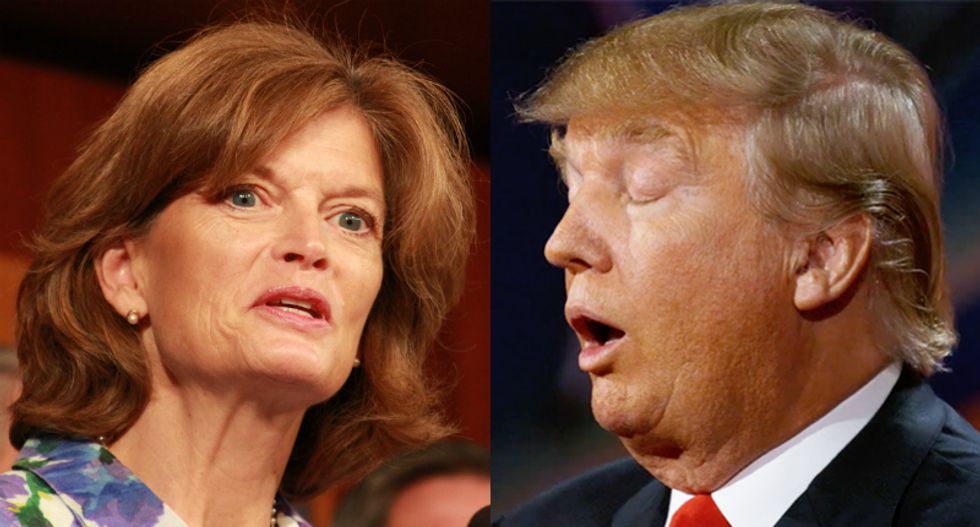 In July, President Donald Trump came after Sen. Lisa Murkowski (R-AK) for refusing to vote for the Republican Party's replacement for Obamacare. Further, she refused to vote for the straight repeal of Obamacare. Trump was reportedly furious to hear members of his own party.

Senator @lisamurkowski of the Great State of Alaska really let the Republicans, and our country, down yesterday. Too bad!
— Donald J. Trump (@Donald J. Trump) 1501067608.0

"My vote yesterday was from my heart for the people that I represent," Murkowski told CNN's Elizabeth Landers. "I'm going to continue working hard for Alaskans and focus on that."

A strange battle appeared to unfold. The interior secretary warned Murkowski that her vote could have negative consequences for energy and land use in Alaska. Immediately, an investigation began into the threat. The threats disappeared. Murkowski then was the senator that worked to ensure Trump couldn't do any recess appointments during the August recess, though Murkowski said the two weren't related.

Now Trump needs the Alaska senator, so he's trying to make nice, according to a CNN report. The senator has been invited to a private lunch with the president earlier this month. While she was unable to attend because of a prior engagement in Alaska, she called the invitation "very kind."

She's not the only senator Trump has gone after in recent months. After Sen. Dean Heller (R-NV) walked away from the Obamacare negotiation table, Trump's Super PAC ran attack ads in his state. Heller is up for reelection in 2018 and is considered an endangered Republican. Trump's ads certainly had an impact and Heller now has a primary opponent from a far right candidate, who identifies as a Trump loyalist. Many GOP leaders unleashed a tirade of fury after. Even Fox News ripped the PAC's spokesperson Katrina Pierson live on air.

"He wants to remain a senator, doesn't he?" Trump said as Heller sat next to him. Trump laughed, but Heller likely didn't think it was funny.

The same seems to be happening with Sen. Jeff Flake (R-AZ). After Trump called him "weak" on border security and crime, Vice President Mike Pence was dispatched to try and smooth things over.

Tennessee Sen. Bob Corker blasted Trump, questioning his "competence" and "stability" to serve as president. Once again, Pence was sent in as a clean-up crew to fix things.

Corker confirmed to CNN Monday that the two spoke "very briefly" about the public dispute in August. He quickly then pivoted to another issue.

"No question," he said, "my relationship is just the same as it was before."

Corker didn't disclose what that relationship was like before, however.

Pence is smoothing over the relationship with Sen. John McCain (R-AZ) too.

The report explains that Pence is managing the relationship with Senate Leader Mitch McConnell (R-KY) as well. It isn't clear if he's doing that out of a legislative duty or because Trump and McConnell don't seem to get along well. It could also be both reasons.