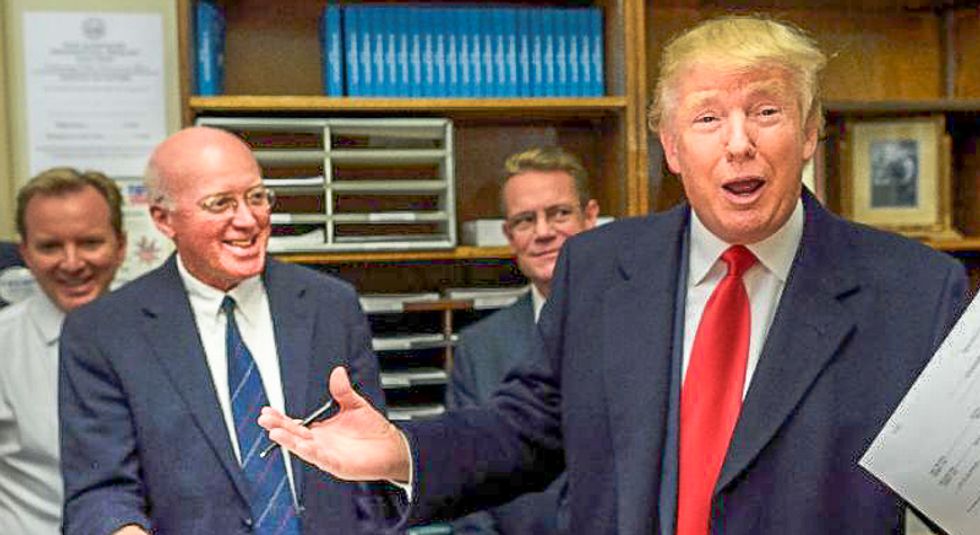 Donald Trump retweeted an edited GIF Sunday morning that showed him hitting a golf ball at Hillary Clinton. The ball appears to hit Clinton in the back and knock her down. The video was first tweeted by one of Trump’s supporters who goes by the Twitter handle “Fuctupmind.”

Are Trump and Fuctupmind just joking around? Can’t we take a joke? No, we can’t. This president has demonstrated a chronic, sustained commitment to enabling and acting out violence against women. Nothing could be less funny.

In October 2016, the Washington Post released the now infamous video of Trump in conversation with Access Hollywood’s Billy Bush. The president said: “I did try and f**k her. She was married… When you’re a star, they let you do it. You can do anything… Grab ’em by the pussy.”

Trump and his supporters defended his lewd remarks, excusing them under the rubric of “locker-room talk.”

We live in a time when demeaning and objectifying women has dire consequences. The leader of the free world is an admitted sexual predator who has granted license to men who abuse and assault women.

Trump and his supporters’ jokes underlie and perpetuate the problem of violence against women. Until 1994 and passage of the federal Violence Against Women Act, it was legal in some states for a man to beat his wife. One in three women in the U.S. has been a victim of domestic violence.

Trump’s retweet of the “joke” golf shot is one of many projectiles fired in his war on women. His education secretary Betsy DeVos has rescinded protections for women who are victims of sexual assault on college campuses. Twenty-nine senators signed an open letter to DeVos, calling her Title IX revision “a step in the wrong direction in addressing the national epidemic of campus sexual assault.”

In May, Trump’s proposed budged showed a massive decrease in funding over 10 years for federal programs that aid survivors of sexual assault and domestic violence. The White House responded to criticism from advocates, calling the cuts a “technical maneuver.”

Trump has rolled back decades of progress in eradicating violence against women. All the jokes, locker-room talk and technical maneuvers must stop. But who will stop him? Trump fired the White House Advisor on Violence Against Women, Carrie Bettinger-Lopez, on Inauguration Day and eliminated the position.

So who is the current White House champion of women? Ivanka Trump? In February, Ivanka organized the White House Women’s Initiative. She tweeted about her meeting with her father and Canadian Prime Minister Justin Trudeau: “A great discussion with two world leaders about the importance of women having a seat at the table!”

Yet earlier this month, Ivanka supported a White House decision to roll back a rule aimed at closing the gender wage gap. Women earn on average 79 cents to every dollar earned by a man, as reported by the Senate Joint Economic Committee.

Ivanka is proxy for women who support Trump. At the president’s rally in Phoenix last month, young women told the Phoenix New Times why they were Trump supporters. The Women for Trump group on Facebook has more than 77,000 followers. Why would any woman support Trump?

An oft-repeated lesson in domestic violence advocacy training reminds us that for more than 2,000 years, women have allied and aligned with their male oppressors in an attempt to ensure their own safety. Ivanka’s silence about her father’s violence against women confers approval and is an act of complicity. While maybe we can understand Ivanka’s behavior as a defensive strategy, in the historical context of men’s oppression of women, she is not exempt from accountability. Ivanka must be called out on her silence at every turn.

Is Trump’s retweet of the violent golf shot at Hillary Clinton just a little joking around? Have we become oversensitive?

A woman friend who is a noted author and New York Times columnist commented on my Facebook post this week about Fox Sports commentator Clay Travis' "boobs" joke in his interview with CNN’s Brooke Baldwin. Travis’ quip was in service of his attack on ESPN commentator Jemele Hill. My friend called Travis’s joke “a little bit funny,” adding, “We’re getting more and more easily offended, and that is a bad thing.”

We need to be more offended, not less. Travis’ joke is emblematic of the underlying cultural pattern of sexism and misogyny that fuels violence against women. Objectification of women is codified by our patriarchal culture. These sorts of jokes are not benign nor innocuous. They are gasoline on the fire.

So the question remains: Who will join feminists in the fight to end the assault on women led by Donald Trump? Good men, that’s who.

Former Vice President Joe Biden has been a tireless champion for decades to end violence against women. He was instrumental in the passage of the Violence Against Women Act and continues his work with the Biden Foundation. He writes: “The greatest sin is the abuse of power, and the cardinal sin of them all is for a man to raise his hand to a woman.”

Former President Jimmy Carter said, “Violence against women is the most pervasive human rights violation in the world.”

In his book, Some Men: Feminist Allies and the Movement to End Violence Against Women, USC professor Michael A. Messner writes about men’s growing roles in preventing violence against women: “But the impact of these endeavors is as yet unclear and will likely be determined by what sorts of strategies people develop on the ground.”

Here’s one strategy: We can stop laughing at the unfunny jokes — and instead, recognize and name them as the acts of violence they are.