Trump makes his debut at ceremonies for new US citizens 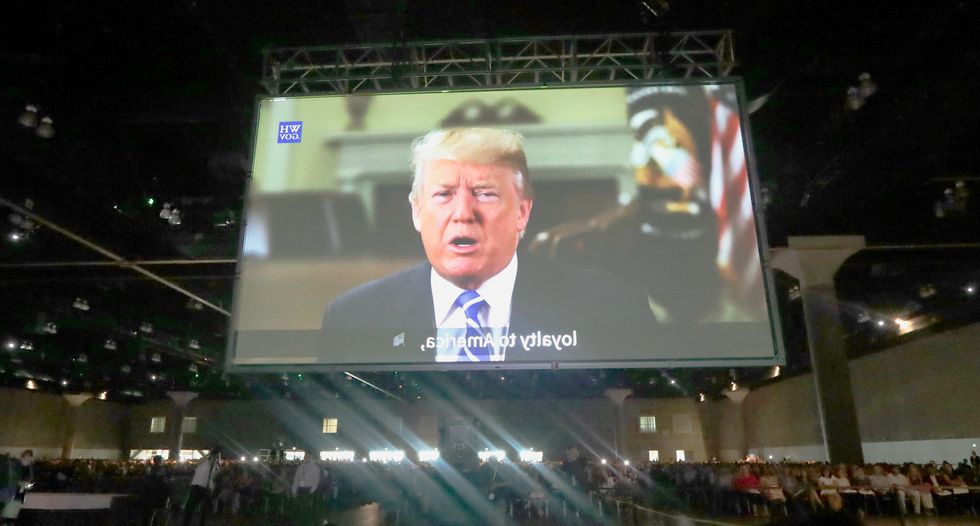 For the first eight months of Donald Trump's presidency, new U.S. citizens did not receive the customary presidential welcome at their naturalization ceremonies.

That changed this week, as immigration officials rolled out a video in which Trump welcomes new citizens into "the American family."

More than 4,500 people from 120 countries were among the first to catch Trump's video as they were sworn in at the Los Angeles Convention Center on Wednesday morning.

"You now share the obligation to teach our values to others, to help newcomers assimilate to our way of life, and uplift America by living according to its highest ideals of self-governance and its highest standards," Trump says in the video.

Attendees applauded at the end of the one-minute-and-37- second recording, which few realized was new to such ceremonies.

In interviews following the event, most new citizens said they appreciated hearing from the nation's leader.

"I'm obviously pleased that there is a message coming from him and that it's positive and embracing," said Monica Babich, 40, who described herself as "not a fan" of Trump's. Babich is originally from Peru but has been a U.S. resident since 1981.

Ramon Hernandez, 47, a waiter who came to the United States from Mexico 30 years ago, was surprised to hear from Trump "because everybody says bad things about him," but said "it was a very good message."

Some attendees expressed skepticism about the message behind the new presidential greeting, in which Trump reads from a teleprompter and only once appears to ad lib when referring to citizenship as "very, very special."

"He did his job as a president," said Akila Mansour, 34, from Algeria. "Whether he really meant it or no, I don't know."

The video was first shown last week at a small ceremony in Washington. On Wednesday, it debuted in Los Angeles, home to the largest citizenship ceremonies in the country.

A greeting from the president has been standard for two decades at swearing-in ceremonies, where new citizens pledge to defend the United States and renounce foreign allegiances. Trump's two immediate predecessors - President Barack Obama and President George W. Bush - both recorded videos that were played at naturalization ceremonies.

Obama, in his video, urged new citizens to "help write the next great chapter in our American story." Bush told participants in the ceremonies that "with a single oath, all at once, you became as fully American as the most direct descendants of the Founding Fathers."

Trump was criticized in some quarters for taking months to record a video for ceremonies, with some questioning whether it was deliberate as his administration has moved to tighten controls on both legal and illegal immigration. A congratulatory video recorded by former Secretary of Homeland Security John Kelly played at ceremonies for a few weeks this summer but was pulled when Trump tapped Kelly as White House chief of staff.

In fact, the timing of Trump's video was in line with that of his predecessor. Barack Obama's recording began airing in October of 2009.