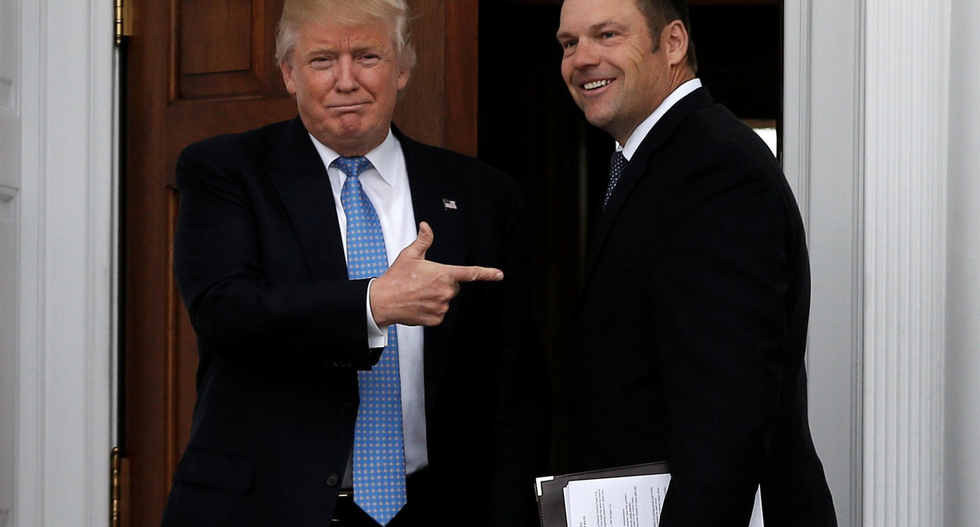 Less than a year after then-candidate Donald Trump called for Hillary Clinton to be imprisoned for using a private email server for Secretary of State business, the man leading the president's "voter fraud" commission is defending his own private email use.

According to the Huffington Post, Kansas Secretary of State and Vice Chairman of Trump's "election integrity" commission Kris Kobach said he used a private email server to conduct business for the voter fraud commission because he did so as a private citizen.

Last week, news broke that Kobach had been using a private email server to conduct business for the federally-created commission, and some argued him doing so could be a violation of the same laws Clinton was accused of breaking with her private server.

In a response (sent from his official Kansas Secretary of State email), Kobach told ProPublica last week that creating a government email for the commission he co-chairs in a "personal capacity" would be a "waste of state resources."

Kobach has become infamous since taking the job on the Presidential Advisory Commission on Election Integrity, created in response to Trump's debunked claims that there was significant voter fraud in the 2016 election. Many have accused him and the commission of enacting voter suppression disguised a way to curb "voter fraud," a justification for many unconstitutional state voter ID laws.

'I could not escape': Fox News pundit throws a fit over 'smell of weed' in Central Park

During a segment on Fox Business, guest host Dagan McDowell suggested there was "soaring crime" because liberal district attorneys were letting suspects go free with little or no bail requirements.

Armed guard was at Michigan school when mass shooting took place and failed to stop it: attorney

As Ethan Crumbley was carrying out his killing spree at Oxford High School, an armed guard who was roaming the school at the time opened the door of a bathroom where Crumbley was still carrying out the attack, then closed the door and walked away, according to an attorney representing the shooting victims' families.

Russian prosecutors on Thursday requested that US basketball star Brittney Griner be sentenced to nine and a half years in prison on drug smuggling charges.

Her hearing comes with tensions soaring between Moscow and Washington over Russia's military intervention in Ukraine that has sparked international condemnation and a litany of Western sanctions.