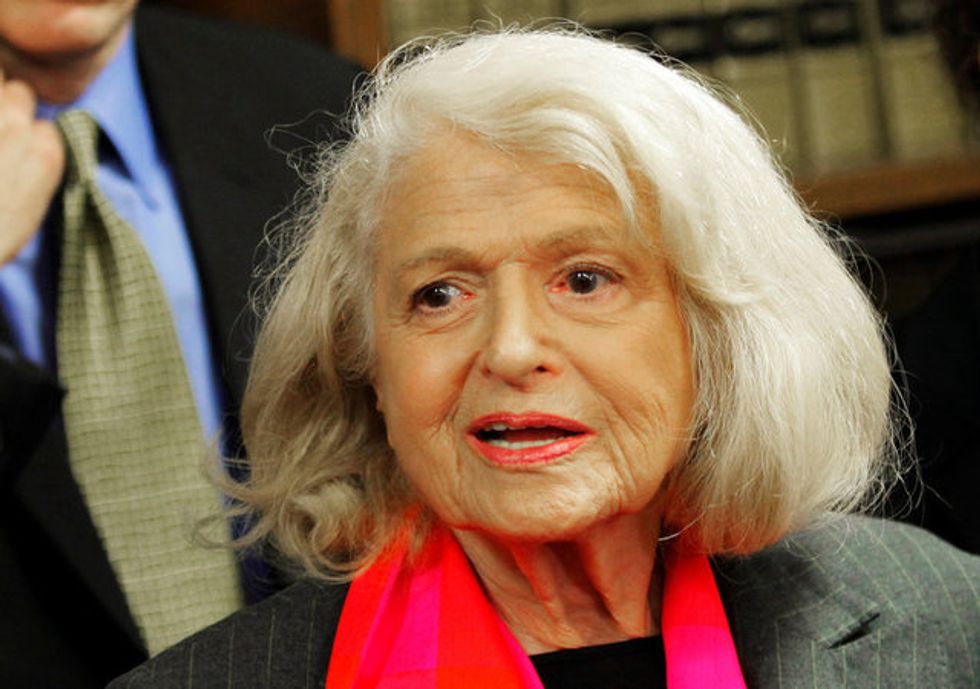 FILE PHOTO: Edith Windsor, an 83-year-old woman who says the Defense of Marriage Act discriminates against gay couples in violation of the U.S. Constitution, speaks to the media during a news conference in New York, U.S. on October 18, 2012. REUTERS/Eduardo Munoz/File Photo

Edith Windsor, the New York woman whose successful challenge to a federal law that defined marriage as between one man and one woman helped pave the way for gay marriage nationwide, died on Tuesday at age 88.

Her passing was announced by her wife, Judith Kasen-Windsor, and lawyer Roberta Kaplan, who did not offer a cause of death.

The 2013 U.S. Supreme Court ruling in United States v. Windsor, which struck down the core of the 1996 Defense of Marriage Act, was credited with laying the groundwork for the court's 2015 ruling in another case that legalized same-sex marriage.

"I lost my beloved spouse Edie, and the world lost a tiny but tough as nails fighter for freedom, justice and equality. Edie was the light of my life," said Kasen-Windsor, who married Windsor last year.

In a statement, former President Barack Obama said he spoke with Windsor a few days ago and told her again how important her work had been to the country.

"America's long journey towards equality has been guided by countless small acts of persistence, and fueled by the stubborn willingness of quiet heroes to speak out for what's right," he said. "Few were as small in stature as Edie Windsor – and few made as big a difference to America."

The case, which made Windsor a revered figure in the modern gay rights movement, originally stemmed from a tax dispute. Windsor, a former IBM consultant known as "Edie," and Thea Spyer, a psychologist, met in the 1960s in a New York restaurant and spent four decades engaged to be married before they finally tied the knot in Canada in 2007.

Spyer died in 2009. Under the Defense of Marriage Act, same-sex marriages were not federally recognized, depriving Windsor of an estate-tax break afforded to heterosexual surviving spouses.

The Supreme Court's Windsor decision applied to gay marriages only in the 13 states that permitted them at the time. In the ensuing months, the central reasoning of the case was cited by courts in several states that found gay marriage bans unlawful.

In 2015, the Supreme Court declared that same-sex marriage was protected by the Constitution.

"It's an accident of history that put me here," Windsor said after she won her case. "If Thea had been Theo," everything would have been different, she added.