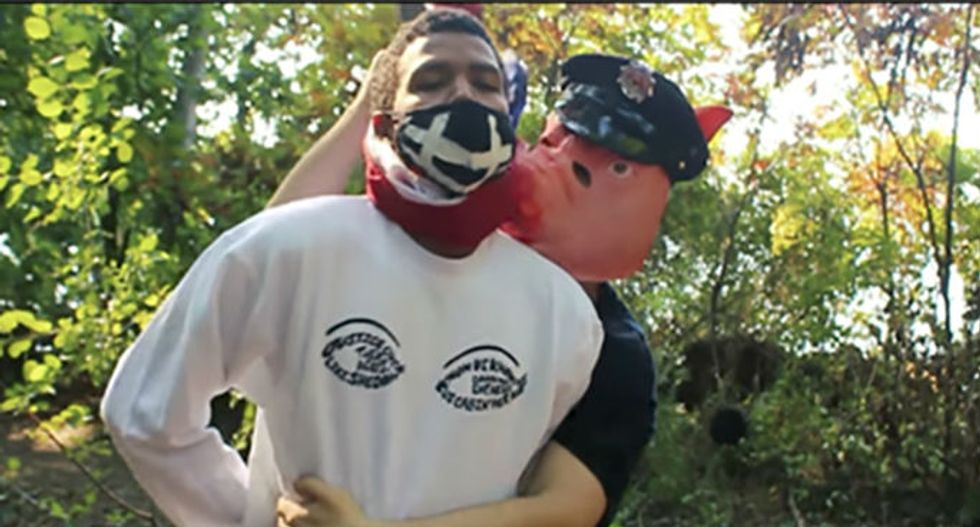 University of Wisconsin-Madison on Thursday released a statement in support of a violent student-directed video portraying police officers in pig masks hanging a black male with the American flag, arguing the film is protected by the First Amendment, the Milwaukee Journal Sentinel reports.

The video, which was filmed as a an advertisement for a student-produced clothing line, depicts a group of black adults in dark hoodies looking on as a police officer pig marches a black male to a noose constructed from the American flag. A voiceover on the film features a mash-up of white supremacists chanting “Jews will not replace us,” and Donald Trump’s post-Charlottesville speech where the president claimed there was violence “on many sides.”

Towards the end of the video, a black man with a white sweater that reads “F*ck the police they the biggest gang in AmeriKKKa” brandishes a machete and severs a pig cop head.

“I think there’s blame on both sides, and I have no doubt about it and you don’t have any doubt about it either,” Trump’s voiceover says as the video closes.

UW-Madison removed the video, but Sen. Steve Nass (R-Whitewater) posted the clip to his press release page. In a statement released with the video, Nass demanded the university “act swiftly and decisively” against the students who made the film, calling it "vile and racist anti-police.”

“This racist video has an intent to incite violence against police officers," Nass said. "This can’t be condoned or ignored. UW-Madison must act swiftly and decisively against anyone on their campus that promotes hateful actions of this type,” Nass said.

Nass argued the video is a "direct threat to the brave men and women that serve behind the badge."

In a statment, UW-Madison said while it does not condone the students’ message, it protects their First Amendment rights.

“UW-Madison strives to provide a welcoming and inclusive campus environment, while allowing everyone to share ideas and political views in exercise of their free speech rights,” the statement reads. "However, the university strongly condemns the glorification of violence such as that contained in the promotion of a student-produced clothing line.”

"We support our police partners, reject violence and violent imagery as tactics to achieve political objectives,” the statement continues. "All citizens have the rights to express political beliefs that others may find objectionable, or even counter to the values of the institution.”

UW-Madison Police Department spokesman Marc Lovicott likewise said the department is aware of the video, but is not in the business of policing students’ Constitutional rights.

"We do not agree with the message, but we appreciate and respect people's opinions and their right to free speech," Lovicott said.