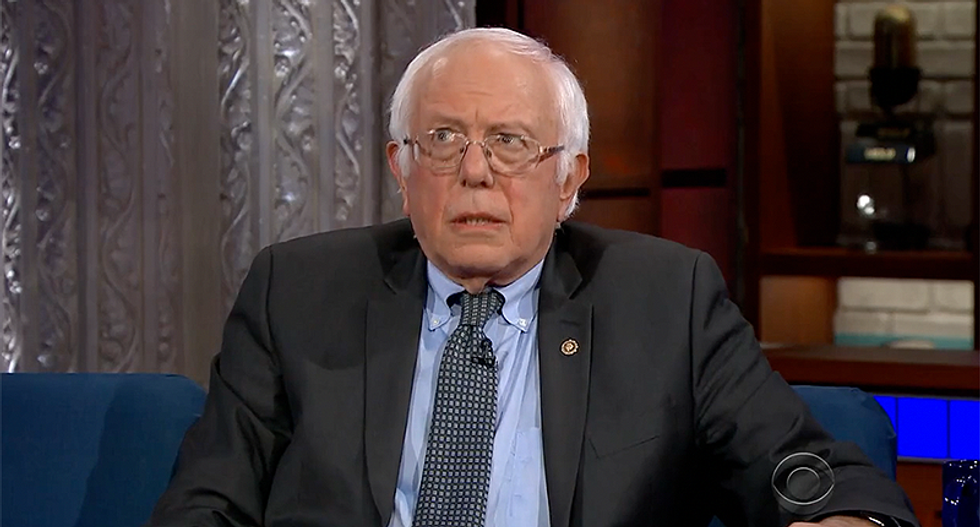 In a Thursday interview with "Late Show" host Stephen Colbert, Sen. Bernie Sanders (I-VT) refused to engage in a battle against his former opponent Hillary Clinton, despite Colbert's best efforts.

In her new book, Clinton claimed that Sanders left lasting damage to her campaign after the Democratic primary. Still, Sanders refused to hit back.

"As a result of our campaign millions of young people began to vote for the first time became engaged in the political process," Sanders responded. He went on to say that his efforts have mobilized many young progressives to seek local offices after being inspired by the 2016 election.

While many would like to see Clinton disappear, Sanders hoped former rival would join him in the crusade for progressive policies like Medicare for all and the fight to raise the minimum wage. He rattled off the "outrageous" actions President Donald Trump has taken since his inauguration, specifically citing the hundreds of thousands of young people he's "kicking off their immigration status."

"Our job now is not to go backwards it's to go forwards," Sanders said. "I think it's a little bit silly to keep looking back to 2016."

While Sanders still loves the enthusiasm of his supporters, he told Colbert that the one thing he still appreciates is getting out among real people get out of Capitol Hill

When it came to saying something nice about President Donald Trump, Sanders struggled for nearly two minutes. The pause was so long that Colbert warned the CBS affiliates the interview might "go long." Ultimately, the only things he could come up with was about their mutual agreement that American infrastructure should be fixed and the cost of pharmaceuticals need to come down.

Watch as Bernie Sanders stumbles trying to come... by sarahburris