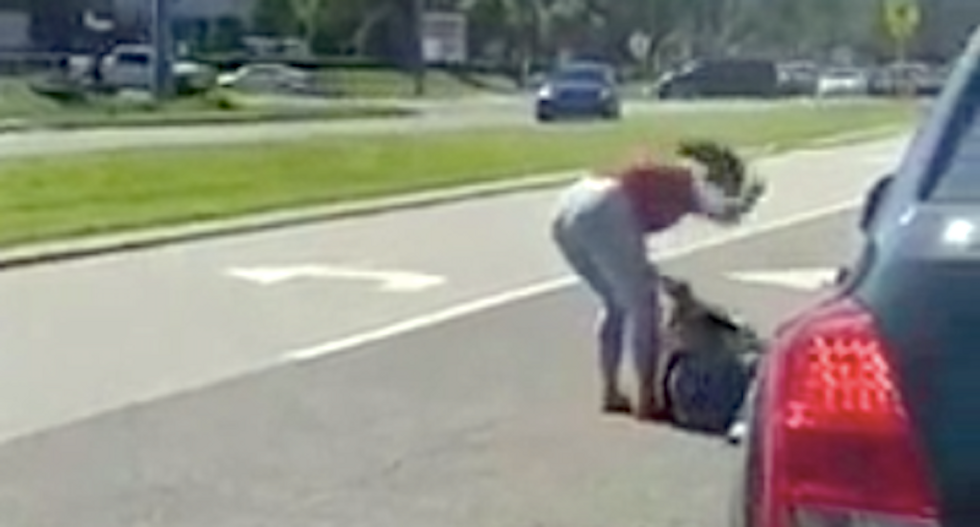 A Florida woman and her stepmother pulled a driver through her car window and beat her unconscious in an apparent road-rage incident.

The two cars were stopped alongside one another Tuesday afternoon in New Port Richey when the pair started arguing with the other driver, who was stopped in the left-hand lane, reported the Tampa Bay Times.

“It was the longest red light of my life," the other driver, Emily Bailery, told WFLA-TV. "They kept screaming at me, telling me they wanted to f*cking kill me. I just wanted the light to change. I never thought they would get out of their car and run toward me and pull me out of my vehicle.”

Another motorist recorded cell phone video as 20-year-old Alicia Nikole Scarduzio and 49-year-old Shelley Lyn Gemberling dragged Bailey by her hair out of her car as she frantically tried to raise the window.

“They tried to drag me through my window," Bailey said. "When I looked into the woman’s eyes, I saw pure rage. It looked like she wanted to kill me. During those times, the daughter said, stop hitting my mom, quit hitting my mom, and then she hit me again, and everything went black.”

Bailey fell to the ground as Scarduzio and Gemberling rained blows on her face and body, knocking her unconscious, Pasco County sheriff's deputies said.

A deputy arrived seconds later from across the grass median, and a man got out of his car to push Scarduzio off the unconscious woman.

The woman suffered a broken nose and other injuries.

She told deputies the incident started over a traffic accident, but it's not detailed in the incident report.

Scarduzio and Gemberling initially told deputies they were the victims, but they were arrested on burglary and aggravated battery charges after investigators gathered more evidence.