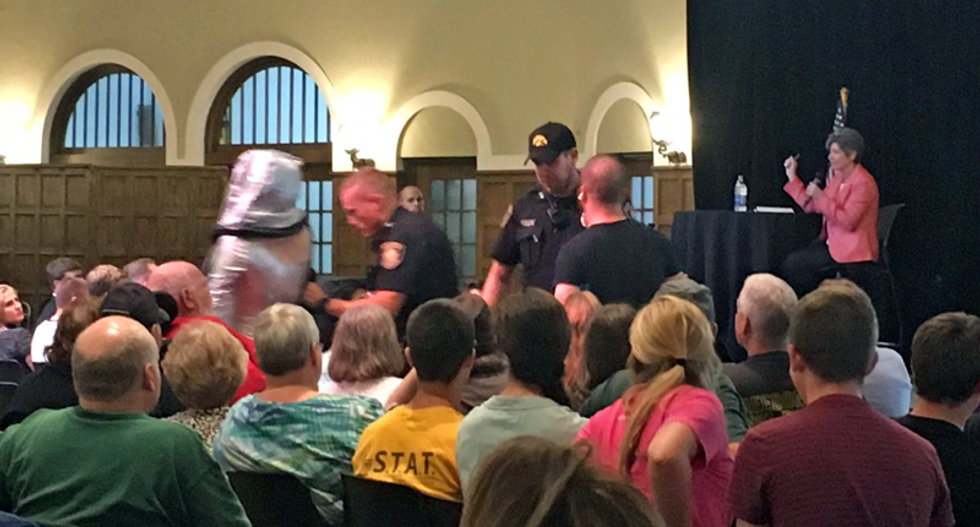 Sen. Joni Ernst looks on from the stage as police remove a protester dressed in a space suit from an Iowa City town hall. Screenshot via @DaveWeigel on Twitter.

"The 750-strong crowd peppered Ernst with questions throughout the hourlong forum, and frequently punctuated her answers with boos, shouts and jeers," The Des Moines Register reported.

"Most of the discussion centered on health care, and the Graham-Cassidy proposal that has dominated the national discussion this week," The Register noted. "She was also asked about universal health coverage through a 'Medicare for All' program — an idea that won hearty cheers and applause in the room but which Ernst dismissed as 'pie in the sky.'”

The audience of Iowa voters was so hostile that Sen. Ernst showed "evident frustration" as the crowd sided with Sen. Bernie Sanders (I-VT) and single payer for health care reform, rather than the latest Trumpcare effort to repeal the Affordable Care Act.

“Really, if I said anything — if I said the sky was blue with regard to this health care bill — you would disagree,” Ernst claimed.

Two protesters were escorted out by police, including one protester costumed as a space man.

At a news conference following the town hall, Sen. Ernst said she was expecting her constituents to be even more hostile.

“Actually, I expected much worse,” Ernst claimed. “I know that tensions are running high."

Watch video of the town hall meeting via The Gazette. Police confront the spaceman at the 16 minute timestamp: