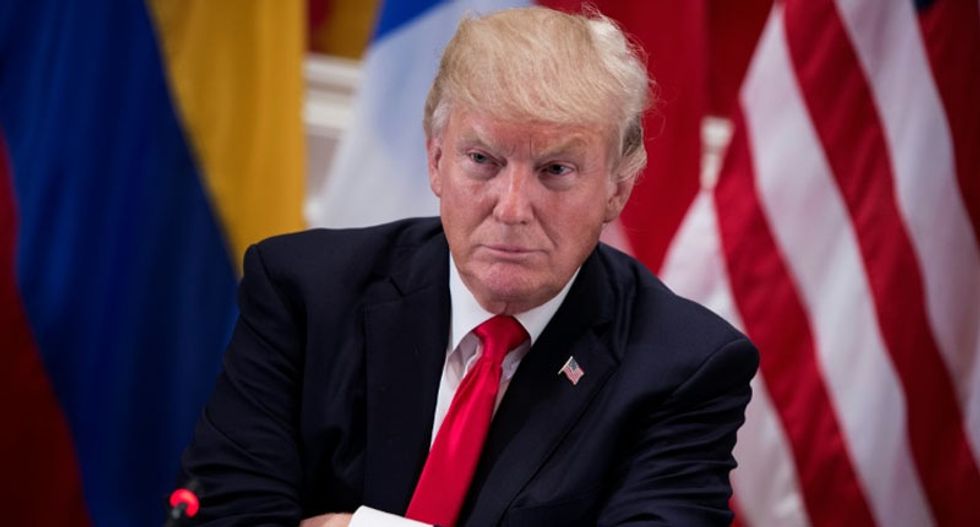 US President Donald Trump will take aim at Iran and North Korea and strike a stridently nationalistic tone in his maiden address to the UN General Assembly Tuesday, rejecting the half-century-old drive toward global governance.

A top aide said Trump will take aim at "rogue regimes that threaten world stability and peace," singling out Pyongyang and Tehran during his half hour remarks and arguing responsible nations must step in to curb their behavior.

Trump has warned North Korea faces "fire and fury" if it does not abandon its nuclear and ballistic missile programs and argued a global deal to curb Iran's uranium enrichment must be reworked.

In both instances, Trump's "America first" stance faces significant pushback from international partners -- from Russia to China to European allies -- who aides say Trump is likely to press to be tougher, but perhaps not name explicitly.

When he steps up to the famous green marble rostrum, Trump will also set out his vision for a world shorn of what one senior advisor familiar with the speech called the overarching "global bureaucracy."

Trump will argue nation states should be free to pursue their interests unfettered -- a contentious message for delegates to the world's foremost multilateral forum.

Since coming to office in January, Trump has sought to unravel US involvement in multilateral deals from the Paris climate accord to an agreement curbing Iran's nuclear program.

He has cancelled a major trans-Pacific trade pact, sought to renegotiate a free trade deal with Mexico and Canada and even threatened to leave the World Trade Organization.

Aides said Trump will not rule out accords between sovereign states -- such as those that underpin security in Europe and Asia -- but will argue against overbearing global governance.

"It's an appeal to each nation to use sovereignty as the basis for mutual cooperation, the idea being that rather than appealing to a top-down model of global bureaucracy, it's a model that's from the nation-state up," a senior official said.

"It is about the nation-state being the best vehicle, as the president has said before, for the elevation of the human condition."

During his first day at the UN General Assembly Trump warned that "bureaucracy" was holding the United Nations back, a barbed message to the world body he once derided as a talk shop.

Trump warned that as chief executive of the United States -- a founding member of the UN and its biggest financial contributor -- he wants a better return on his investment.

"The United Nations was founded on truly noble goals," he said, adding that while progress has been made, "in recent years the United Nations has not reached its full potential, because of bureaucracy and mismanagement."

Allies and foes alike will rummage through Trump's speech on Tuesday for a better idea of how this lurching superpower foresees its future place in the world.

"The bar for success, as usual, is very low," said Thomas Wright of the Brookings Institution. "If the president can make a half decent attempt at playing the role of the leader of the free world, everyone will breathe a sigh of relief."

"The risk, also as usual, is that he goes off script and says what he really thinks."

More tub-thumping at the UN would thrill his diehard fans at home, but bellicose warnings to North Korea would undoubtedly make Tokyo and Seoul -- both well within range of North Korean ballistic missiles -- uneasy.