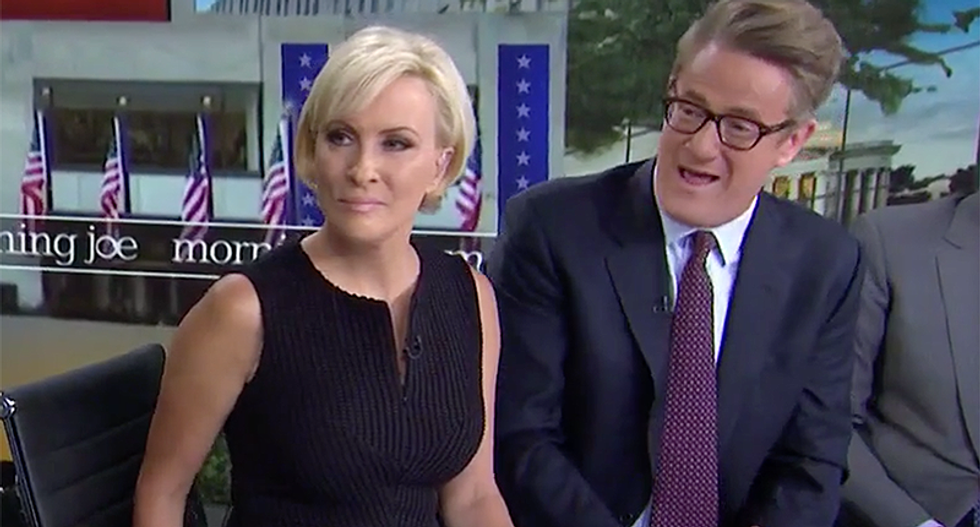 Joe Scarborough railed against the Republican-led Congress during Wednesday's "Morning Joe" panel. No one was safe. Scarborough ripped House Speaker Paul Ryan (R-WI) as well as Senate Leader Mitch McConnell (R-KY) for pretending that they are powerless against President Donald Trump ending DACA.

Commentator Mike Barnicle wondered how much longer it will take for Republican leaders to understand that Trump has no idea what he's doing or talking about.

"If it were me, this would be my last straw," Scarborough agreed. He went on to say that if he were in the leadership he'd tell the White House they were taking over the legislative agenda and demand he stay out of their way.

"We're going to do what we're going to do and then you can have pretty bill signing ceremonies," Scarborough mocked. "Just stay out of the way. Because you don't know what you're doing."

Scarborough railed against Speaker Ryan for doing nothing but tweeting. "He looks horrible! Someone around him needs to tell him he looks horrible when he talks about how shocked and stunned and deeply saddened he is by actions like this. And pretends as if he doesn't have any power. I'm telling you, how many times can you be insulted if you're Mitch McConnell, before you say, 'I'm taking over.'"

Acting as McConnell, Scarborough ultimately concluded what should be said is, "Mr. President you need to shut your mouth."

Frequent panelist and sometimes host Mark Halperin said that Congress needs Trump because they don't have the votes without him. They need him to be the leader of the party and given his lack of experience, he doesn't know how.

"Democrats are going to ask for something in return," Halperin retorted.

"Well, you know what you do? You give it to them!" Scarborough exclaimed. "You know why? Because that's how our founding fathers saw the Constitution of the United States. There's give and take."

Political reporter Kasie Hunt jumped in to say that both McConnell and Ryan would still rather have Trump than have to talk to anyone in the Democratic Party.

"If they're not smart enough to be able to pass this and say 'I'm not with Nancy Pelosi - I'm with 75 percent of the American people,' then they don't deserve to be in their position," Scarborough concluded. "They should go into a dark basement in Janesville and tweet the rest of their life. This is not hard. 'I'm not with Nancy Pelosi, my friend of Green Bay, Wisconsin. I love the Wisconsin Badgers and I love the American dream!' How's that? It's not hard. Seriously? You pick up points in your district when you act this way! You really do! And, yes, I do know this because I crossed my party time and time and time again when they did really really stupid things and [it increased poll numbers]."

Co-host Mika Brzezinski chimed in, "It's very insulting to the American people they're not given the option of being treated anything but really dumb by people like Paul Ryan."