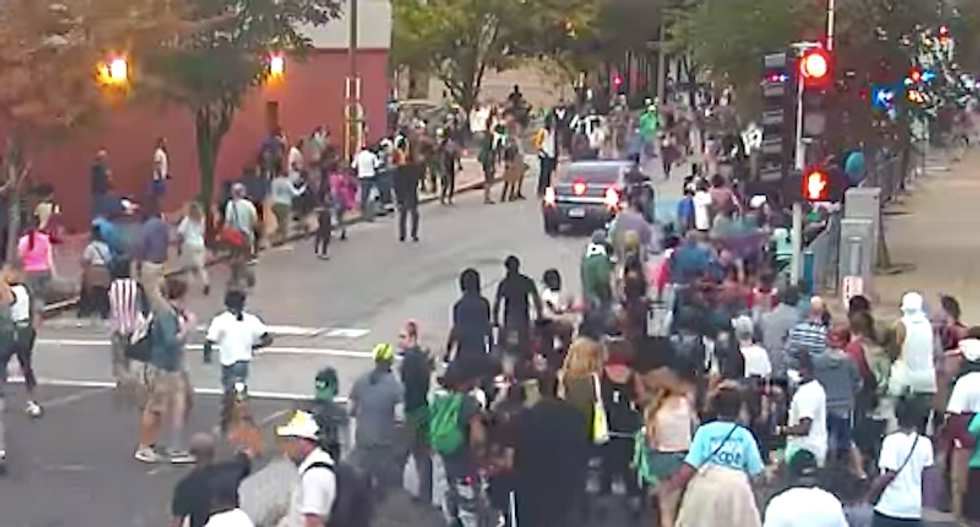 Unmarked car drives in to crowd of protesters (YouTube)

A St. Louis police officer drove an unmarked car backwards into a crowd of protesters following the arrest of two suspects near an anti-violence demonstration.

The unmarked car narrowly missed demonstrators Sunday evening, on the third day of protests over the acquittal of an ex-officer on murder charges, and the crowd chased the vehicle for more than a block, reported the Riverfront Times.

The protest has been going on since Friday, when former officer Jason Stockley was acquitted of first-degree murder in the 2011 killing of Anthony Lamar Smith.

Police arrested more than 80 people late Sunday after the peaceful protest turned violent in a small area of downtown, where some demonstrators smashed windows, overturned trash cans and threw rocks and other items at officers.

Protesters complained police were unnecessarily aggressive, and some witnesses overheard police chanting, "whose streets, our streets," during the arrests.

Police had stopped a minivan driver about 7 p.m. near the protest and arrested the driver on an assault warrant and charged a passenger with making terrorist threats, and officers confiscated three guns.

About half the crowd, estimated at about 1,000 people at its afternoon peak, had left by the time the officer put the unmarked Impala in reverse and shot through the crowd.

Demonstrators threw water bottles at the car until protest organizers shouted at them to stop, and police arrested a man who threw a rock that struck the rear of the car.

Richard Williams and Johnny Roberts Jr. said two officers from the unmarked car grabbed them as they walked away from the protest toward the traffic stop, which they weren't even aware had taken place.

One officer threw Roberts against the wall of the police station, and another started to arrest Williams before other officers said they were not the wanted suspects.

A crowd began to gather as a demonstrator spread word of what appeared to be arrests, and the two officers got into the Impala and backed down the street.

Police said the officer drove in reverse out of concern for his own safety, saying the crowd was moving in a threatening manner toward the unmarked car.

Surveillance video captured some of the incident.

Six Republican state legislatures have considered bills to shield drivers from liability for driving into protesters blocking streets, and a neo-Nazi drove a car into a Virginia protest last month, killing one demonstrator.