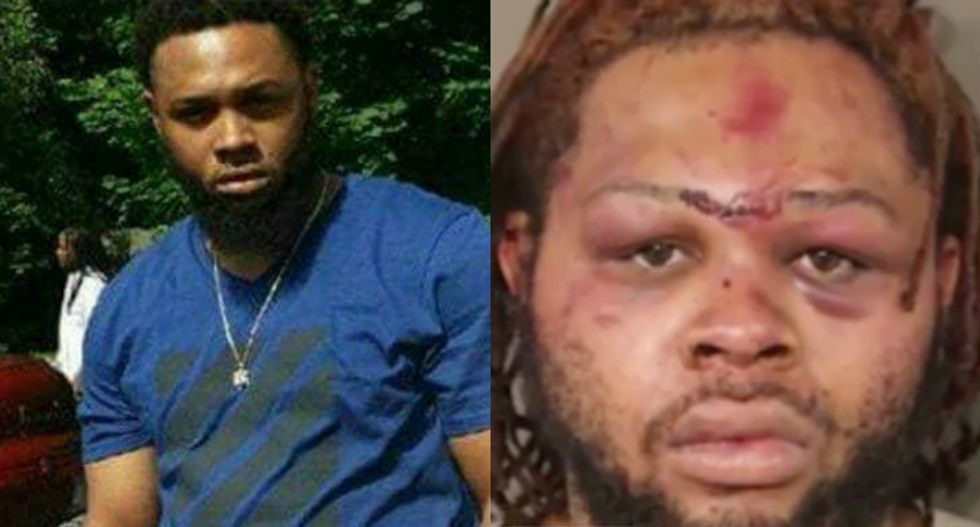 Columbus resident Timothy Davis before his run-in with the police (left, via Facebook) and after (right, via screenshot).

According to local TV station NBC4i, the man's name is Timothy Davis, and video shows officers repeatedly kicking and punching Davis while he was down. Police claimed Davis "tensed up to fight," and took officers down with him.

In cell phone videos, people at the store where Davis was arrested said the police used excessive force.

“We are allowed to punch and we are allowed to kick,” Police Spokesman Sgt. Dean Worthington told the NBC affiliate. “That’s part of our use of force continuum and it all depends on what the behavior of the suspect is at the time."

Davis, who has a warrant out for his arrest, reportedly has a record of charges related to resisting arrest and assault.

Public outcry about the alleged use of excessive force led to anti-police brutality protests in Davis's honor in Columbus.

Raw Story has reached out to the City of Columbus' police division for commented.

You can watch cell phone video of the incident below.

In a statement, Columbus police spokesman, Sgt. Dean Worthington, told Raw Story that while officers are legally allowed to use "reasonable force" to arrest suspects, there is currently an Internal Affairs investigation within their police division as to whether the force officers used on Davis was, in fact, reasonable.

"We're looking into it," Worthington said in his statement.