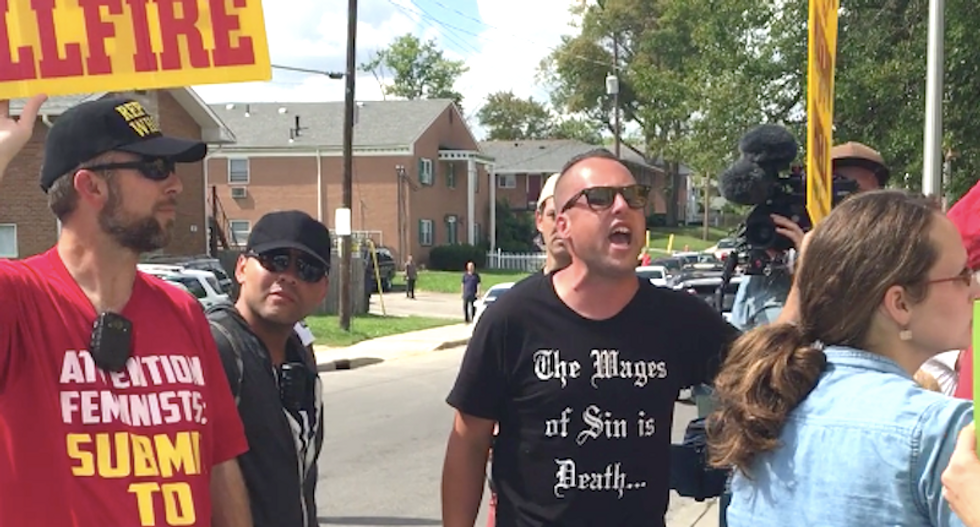 An anti-gay group shouted hateful slurs during a contentious protest outside an Ohio mosque.

The Official Street Preachers demonstrated Friday afternoon outside Masjid Omar mosque in Columbus, where they were overwhelmed by a counter-demonstration, reported WOSU-FM.

"We love Donald Trump, you wicked devil," shouted one protester. "You're nothing but a wicked liberal devil."

"Lukewarm Christians like Trump will burn in hell with all liberals," read that protester's sign. "Repent and obey Jesus."

About 10 members of the Los Angeles-based organization, which has been identified as a hate group by the Southern Poverty Law Center, picketed outside the mosque -- where about 50 counter-protesters greeted them.

"They were defiling Islam, just blatantly trying to find the most radical things they could say about Islam," said Rebecca Brown, of the Christian group Peace Catalyst Columbus. "But also very confrontational and aggressive towards those of us who were trying to be peacefully present."

Peace Catalyst Columbus formed a ring around the mosque as Muslim worshipers conducted prayer services inside.

The hate group left when the mosque director came outside to thank the counter-protesters.

The Official Street Preachers went to Cincinnati over the weekend to protest the "drunken Oktoberfest" held annually downtown.