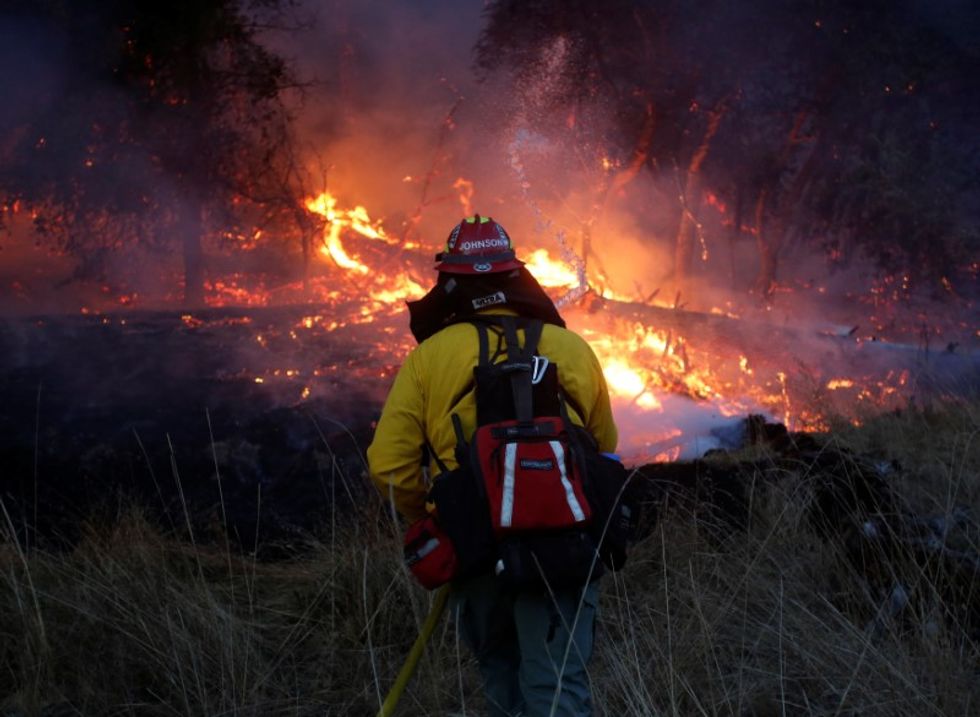 Fast-moving fires spread by shifting winds forced thousands more Californians to evacuate their homes on Saturday as the death toll from the deadliest blaze recorded in the state's history rose to at least 40, with hundreds of people still missing.

The 40 confirmed fatalities, including 22 in Sonoma County, already make it the deadliest fire event in California history.

Some 100,000 people have been forced from their homes, including 3,000 evacuated on Saturday from the city of Santa Rosa, about 50 miles (80 km) north of San Francisco.

"This is truly one of the greatest tragedies that California has ever faced. The devastation is just unbelievable. It is a horror that no one could have imagined," California Governor Jerry Brown said on a visit to a devastated Santa Rosa.

The fires have damaged or destroyed about 5,700 structures, reducing homes and businesses to ash. The fires' death toll surpassed the 29 deaths from the Griffith Park fire of 1933 in Los Angeles.

Janis and Roberto Lucha joined scores of people lining up at a temporary Federal Emergency Management Agency office in Santa Rosa, seeking help after losing their home of 27 years in the city's Coffey Park neighborhood, where most homes burned to the ground.

Molly Kurland, 63, has lived in her Santa Rosa home for nearly as long and her house was still standing. She joined a packed community meeting with worried residents at the Santa Rosa High School gymnasium.

"Even for people who haven’t lost their house, the uncertainty and anxiety is tremendous," she said. "We are seeing the places where we shop for groceries disappear. My favorite restaurant is gone.”

There were some glimmers of hope as winds weakened and firefighters made progress with blazes such as the Cascade Fire, about 80 miles northeast of Santa Rosa, which was nearly 10,000 acres and 87 percent contained on Saturday, Cal Fire said.

Winds are expected to weaken overnight, which should help in fighting the fires but high temperatures and dry conditions that feed the fires will remain through the weekend, forecasters said.

”This is still very much in play. The danger is still very present," said U.S. Senator Kamala Harris, a Democrat from California, who accompanied Brown on the visit.

At least a dozen Napa Valley and Sonoma County wineries were damaged or destroyed, throwing the state's wine industry and related tourism into disarray.

For the picturesque Napa Valley town of Calistoga, the winds were a double-edged sword. The town was spared by hazardous winds when they shifted, Mayor Chris Canning said, though he warned a resurgence could pose a new threat.

The town of roughly 5,000 people had been evacuated, he said.

Firefighters from states including Oregon, Washington, Arizona, Colorado and Nevada have joined crews from California to battle the blazes.

From the air, some 70 helicopters and large aircraft including a 747, two DC-10s and about a dozen air tankers doused flames across the affected area with fire retardant, officials said. Aircraft have dropped more than 2 million gallons (7.6 million liters) of fire retardant.

Cal Fire had estimated the fires would be contained by Oct. 20.

In an area largely dependent on immigrant farm labor, U.S. Immigration and Customs Enforcement officials said they would temporarily suspend routine operations during the emergency, "except in the event of a serious criminal presenting a public safety threat," spokesman James Schwab said in a statement.

U.S. Senator Dianne Feinstein, another California Democrat accompanying the governor, pledged more federal aid to the region to help it through the devastation.

Whole neighborhoods of Santa Rosa have been reduced to landscapes of ash, smoldering debris and burned-out vehicles.

Some victims were asleep when flames engulfed their homes, and many survivors had only minutes to flee.

With 235 people still missing on Saturday in Sonoma County alone, and rubble from thousands of incinerated dwellings yet to be searched, authorities have said the number of fatalities from the North Bay fires would likely climb.

The year's wildfire season is one of the worst in history in the United States, with nearly 8.6 million acres (3.5 million hectares) burned, just behind 2012, according to the National Interagency Fire Center.

Even with the ever-present danger of wildfires in California, where many prepare bags for quick evacuation, the ferocity of these fires stunned residents.

“Everything went up like a blow torch. No warnings. No firemen. Just neighbors honking horns,” said Steve Spencer, who, with his wife Kay, lost their home in the Coffey Park neighborhood.