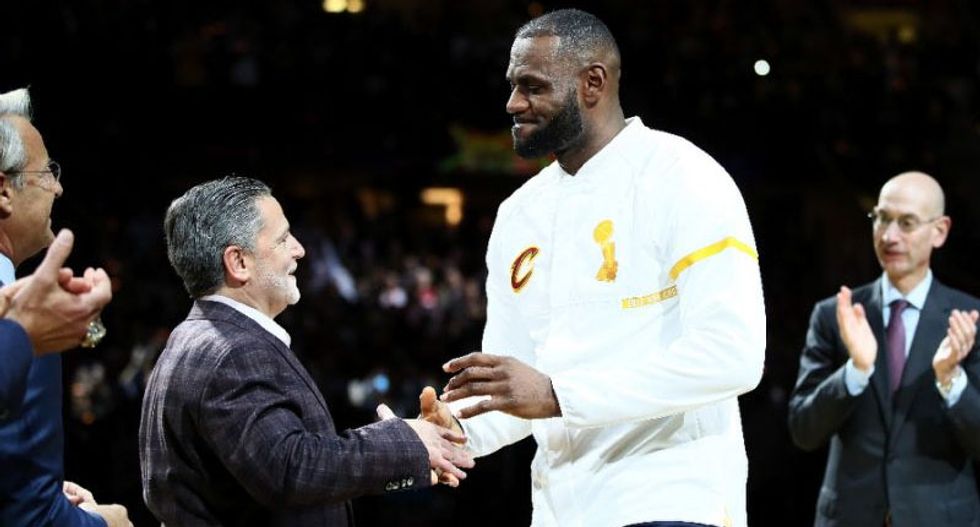 Cleveland Cavaliers owner Dan Gilbert has revealed he was bombarded with "racist" messages after LeBron James branded President Donald Trump a "bum" following his spat with the Golden State Warriors.

Gilbert told CNBC's "Squawk Box" program his voicemail inbox was deluged with offensive messages after James hit out at Trump for saying the Warriors and star Stephen Curry would not be welcome at the White House.

"I received voicemails after LeBron tweeted that were some of the most vile, disgusting, racist (messages)," Gilbert said. "There's an element of racism that I didn't even realise existed in this country this much."

James's exchange with Trump unfolded after the US leader responded to comments from Curry that he did not want to attend a White House reception for the NBA championship-winning Warriors.

"Going to the White House is considered a great honor for a championship team. Stephen Curry is hesitating, therefore invitation is withdrawn!" Trump wrote last Saturday.

James responded soon afterwards: "U bum @StephenCurry30 already said he ain't going! So therefore ain't no invite. Going to White House was a great honor until you showed up!"

James's comments were widely quoted during a dramatic weekend which saw Trump at loggerheads with both the NBA and the National Football League.

Gilbert told CNBC he had saved the voicemails targeting James, who was also targeted last May when racist graffiti was daubed on the front gate of his Los Angeles home.

"The thing is, I mean, some of the most disgusting things I've ever heard people say," Gilbert told CNBC. "And you could hear it in their voice -- the racism. It wasn't even about the issue, and that's what really got me, because they went to who they really are, some of them."