Here's the one thing conservatives and liberals might unite behind 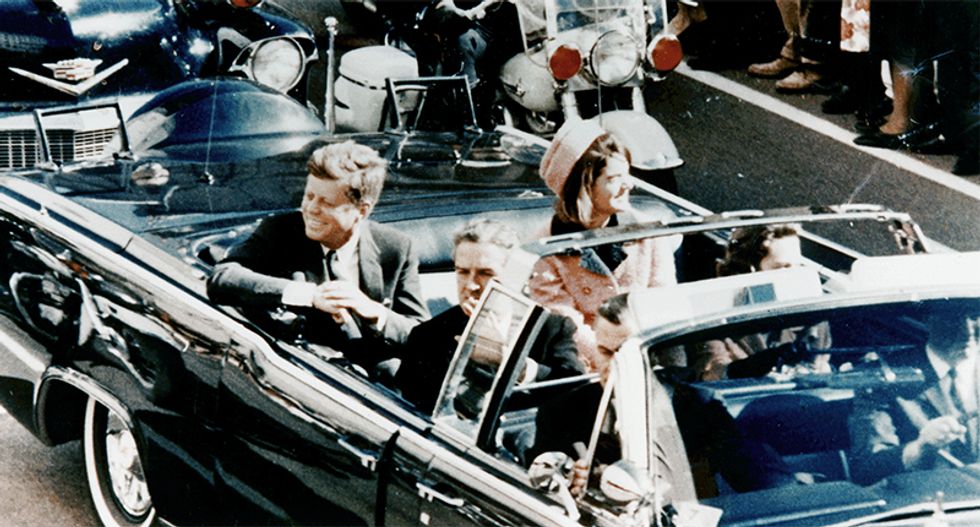 A bipartisan group of congressmen are urging President Trump to insist on “full public release” of the government’s JFK assassination records by October 26 and to “reject any claims for the continued postponement" of the records.

In two “sense of Congress” resolutions introduced Wednesday on Capitol Hill, the legislators call for the CIA, FBI and other federal agencies to release all of their records related to the November 1963 murder of President John F. Kennedy.

JFK’s assassination generated six official investigations and widespread belief that the liberal president was the victim of a conspiracy and not of a lone gunman.

After the box-office success of Oliver Stone's conspiratorial epic "JFK," Congress unanimously approved the JFK Records Act on Oct. 26, 1992, mandating release of all government records related to JFK’s death within 25 years. Most of the files have been made public, but some 35,000 documents remained fully or partially redacted and have never been seen by the public, researchers or the media. By law, federal agencies must obtain the written permission of the president to keep these documents secret after this month.

“The president can be a real hero to the American people if he says the truth does matter,” Rep. Walter Jones (R-NC), leader of the effort, told AlterNet in a phone interview.

“Transparency in government is critical not only to ensuring accountability; it’s also essential to understanding our nation’s history,” said Sen. Charles Grassley (R-Iowa) in a written statement. “Americans deserve a full picture of what happened that fateful day in November 1963. Shining a light on never-before-seen government records is essential to filling in these blank spaces in our history."

The CIA and FBI have not yet revealed whether they will appeal to Trump for continuing secrecy.

“CIA continues to engage in the process to determine the appropriate next steps with respect to any previously unreleased CIA information,” spokesperson Nicole de Haay told AlterNet last month.

In a statement to AlterNet, the FBI press office said, "We do not have a comment to provide and suggest you reach out to the White House."

The White House did not respond to request for comment.

According to the National Archives online database, the unreleased records include CIA files on two senior officers involved in assassinations and four Watergate burglars, as well as the closed-door testimony of numerous JFK witnesses, such CIA spymaster James Angleton.

The resolutions have attracted diverse support. The House measure, introduced by Jones, is co-sponsored by several members who served in Congress in 1992 and voted for the original JFK Records Act. They include liberal representatives John Conyers (D-Mich.), currently the longest serving member of Congress; Marcy Kaptur (D-Ohio), the longest serving woman in the House; Louise Slaughter (D-NY); and Gerry Connolly (D-Va.).

The Senate resolution (S. Res. 281) was introduced by Grassley, the conservative chairman of the Judiciary Committee, and co-sponsored by liberal Sen. Patrick Leahy (D-Vermont), the ranking member of the committee.

“Chairman Grassley and I both believe that a government of, by, and for the people simply cannot be one that needlessly hides information from them,” Leahy said in a statement. “I look forward to continuing our efforts to make our democracy ever more transparent to the American people."

Jones said he will send a letter to all members of Congress seeking their support for the non-binding resolutions.

Jones also said he plans to contact Roger Stone, a confidante of Trump and a JFK conspiracy theorist. On Wednesday, Stone joined anti-conspiracist author Gerald Posner in a public statement calling for release of the JFK files.

“I will ask Mr. Stone to please use his influence with Donald Trump to encourage the president to join in this effort,” Jones added.

The first batch of the last JFK records, released by the National Archives in July, generated several revelations that shed new light on the JFK story.

One top CIA counterintelligence official came to doubt the lone gunman theory in the mid-1970s and suspected Cuba might have been involved, according to Politico.

WhoWhatWhy reported on records showing that Earle Cabell, the mayor of Dallas at the time of JFK’s murder, was a CIA asset.

Collectively, the latest revelations pour cold water on the theory that the Soviet intelligence service, the KGB, was involved in JFK’s murder, while raising questions about the “Castro did it” theory and the role of the CIA in the events leading up to Nov. 22, 1963.

Whether any JFK records will remain secret after this month is up to President Trump. The conspiracy-theorist-in chief has three weeks to decide.