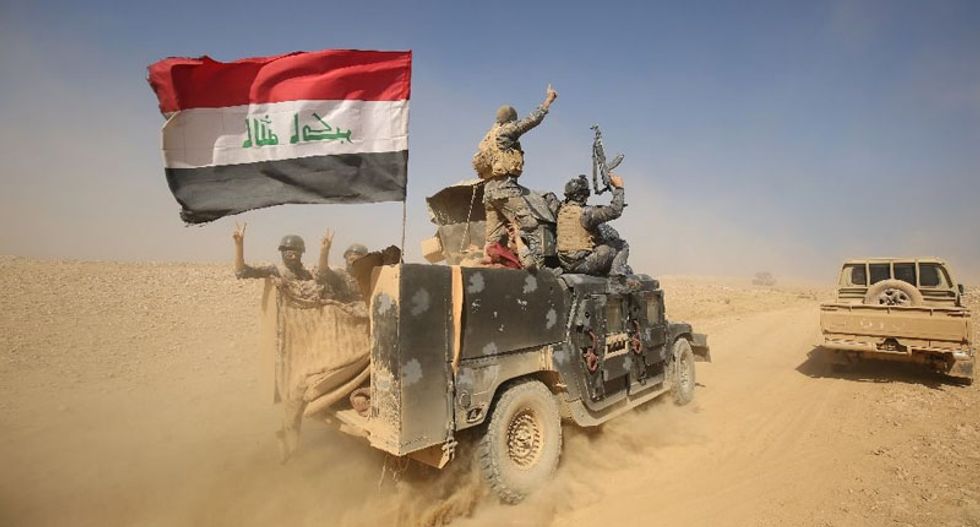 Iraqi forces seized the Kirkuk governor's office, key military sites and an oil field on Monday as they swept across the disputed province following soaring tensions with Kurds over an independence referendum.

The rapid advance, involving troops, tanks and armoured vehicles, aims to recapture oil and military targets that Kurdish forces took over during the fightback against the Islamic State group (IS).

Iraqi forces thrust into Kirkuk city, capital of the oil-rich province, and took control of the governor's office, which had been left deserted, the federal police chief said.

Thousands of residents fled Kurdish districts, heading in buses and cars towards the autonomous Kurdistan region of northern Iraq.

"We're leaving because we're scared there will be clashes" in the ethnically mixed city of 850,000 people, said 51-year-old Chounem Qader.

At the same time crowds on the streets of Kirkuk's southern outskirts welcomed Iraqi forces as they entered the city, where they were seen raising Iraqi flags in the place of Kurdish ones.

The US-led coalition against IS urged the two sides -- both key allies -- to "avoid escalatory actions" and to focus on fighting the jihadists, on the verge of losing their last strongholds in Iraq.

The International Rescue Committee aid group urged all those involved in the fighting to "do everything within their power to protect civilians".

The police called on residents who had fled to return as it said the situation was stable, and late Monday declared a night-time curfew in Kirkuk city.

Iraqi and Kurdish peshmerga forces exchanged artillery fire early Monday south of the provincial capital, after the launch of the operation overnight which triggered a spike in oil prices on world markets.

A Kurdish health official said at least 10 peshmerga fighters were killed and 27 wounded during fighting overnight, but there was no confirmation of the toll from the Kurdish government.

The rapid progress of Iraqi forces suggested that Kurdish fighters were withdrawing with little or no resistance in many areas.

Iraq's Joint Operations Command said its forces had retaken the K1 military base northwest of Kirkuk, the military airport east of the city and the Baba Gargar oil field, one of six in the disputed region.

The operation follows an armed standoff between Kurdish forces and the Iraqi army prompted by the September 25 non-binding referendum that produced a resounding "yes" for Kurdish independence.

Baghdad has declared the vote -- held despite international opposition -- illegal.

Iraqi Prime Minister Haider al-Abadi said the operation was necessary to "protect the unity of the country, which was in danger of partition" because of the referendum.

"We call upon all citizens to cooperate with our heroic armed forces, which are committed to our strict directives to protect civilians in the first place, and to impose security and order, and to protect state installations and institutions," he said.

Peshmerga forces loyal to the Patriotic Union of Kurdistan (PUK), a political party linked to Iraqi President Fuad Masum, a Kurd, were reported to be withdrawing from areas under their control.

The PUK had supported a UN-backed plan for negotiations with Baghdad in exchange for dropping the referendum.

Pro-PUK forces were deployed south of the city, including at oil fields, while fighters loyal to the rival Kurdistan Democratic Party (KDP), linked to Iraqi Kurd leader Massud Barzani who initiated the referendum, were deployed to the north.

The US-led coalition against IS called for dialogue between Iraqi and Kurdish authorities.

"All parties must remain focused on the defeat of our common enemy, ISIS, in Iraq," said Major General Robert White, a commanding general in the coalition, referring to IS.

The coalition said it was aware of reports of clashes but they appeared to be the result of a "misunderstanding and not deliberate".

On Sunday, Iraq's National Security Council said it viewed as a "declaration of war" the presence of "fighters not belonging to the regular security forces in Kirkuk", including fighters from Turkey's outlawed Kurdistan Workers' Party (PKK).

Ankara, which fears the independence vote by the Iraqi Kurds could spark similar moves by its own Kurdish minority, said it was ready to help Baghdad oust Kurdish fighters from Kirkuk.

Long claimed by the Kurds as part of their historic territory, Kirkuk province has emerged as the main flashpoint in the dispute.

Polling during the referendum was held not only in the three provinces of the autonomous Kurdish region but also in adjacent Kurdish-held areas, including Kirkuk, that are claimed by both Baghdad and Iraqi Kurdistan.

The Kurds have been in control of six fields in the Kirkuk region providing some 340,000 of the 550,000 barrels per day exported by the regional administration.

The fields would provide crucial revenue to Baghdad, which has been left cash-strapped from the global fall in oil prices and three years of battle against IS.