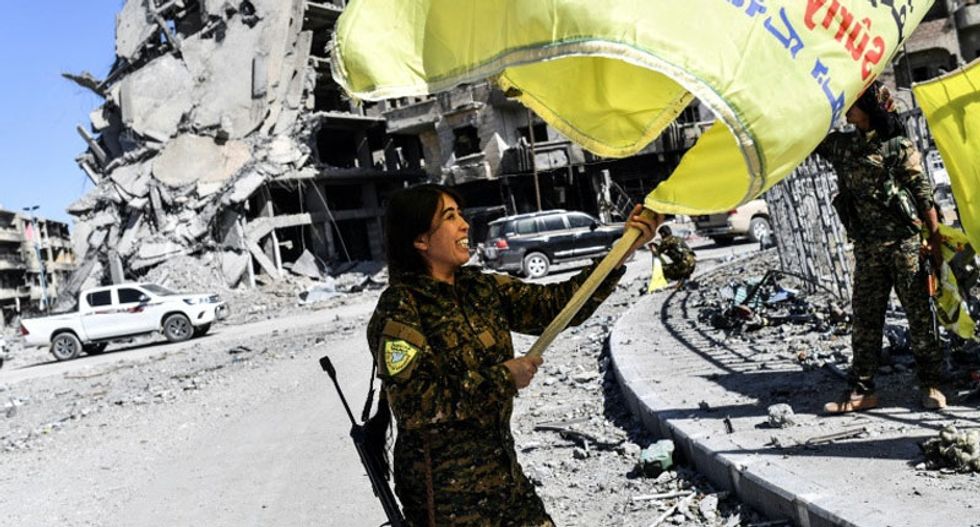 US-backed forces took full control of Raqa from the Islamic State group on Tuesday, defeating the last jihadist holdouts in the de facto Syrian capital of their now-shattered "caliphate".

The victory caps a battle of more than four months for Raqa, and hammers another nail in the coffin of the jihadist group's experiment in statehood, which has collapsed in the face of offensives in Syria and Iraq.

Inside Raqa, overjoyed fighters from the Kurdish-Arab Syrian Democratic Forces celebrated and raised their yellow flag in the city's Al-Naim traffic circle, which became known as "Hell Roundabout" after jihadists used it for gruesome public executions.

Raqa had become a byword for atrocities carried out by the jihadists and it was from the city that IS organised devastating attacks it has claimed abroad like the Paris massacres in 2015 or August's attacks in Barcelona.

"Hell Roundabout is now Al-Naim Roundabout again," the fighters in Raqa cheered, surrounded by crushed buildings and charred cars damaged in the ferocious battle for the city.

Rojda Felat, the SDF's commander for its Raqa operation, flashed a wide grin as she waved a huge yellow flag emblazoned with the militia's name, her rifle hanging from her shoulder.

The defeat of IS in Raqa was a victory "the whole world was waiting for," said Omar Alloush, a member of the Raqa Civil Council formed to run the city after its liberation.

Raqa has been devastated by fighting and emptied of civilians, with the last few thousand departing under a deal implemented over the weekend.

For Umm Abdullah, a Raqa native who fled the city three years ago, news of its capture was overwhelming.

The SDF broke into Raqa in June, after months of fighting to surround the city, and on Tuesday flushed the last few hundred IS fighters from their remaining positions in the main hospital and the municipal stadium.

"Everything is finished in Raqa, our forces have taken full control of Raqa," the alliance's spokesman Talal Sello told AFP.

He said the SDF was combing the city for any remaining jihadists who had not surrendered or been killed.

"The military operations in Raqa have finished, but there are clearing operations now under way to uncover any sleeper cells there might be and remove mines," he said.

The announcement came just days after the SDF launched the final phase of its operation to retake the city.

There had been fears that the force, backed by the US-led coalition battling IS in Syria and Iraq, could get bogged down in a protracted battle for the last 10 percent of the city.

But on Tuesday they captured the hospital and stadium in quick succession, effectively ending IS's more than three-year presence in the city.

Sello said an official statement announcing "the liberation of the city" would be made soon.

The US-led coalition backing the operation made no statement on the city's capture, but announced that IS had lost 87 percent of the territory it seized in 2014.

"ISIS is losing in every way," coalition spokesman Colonel Ryan Dillon added in a tweet, using an alternate acronym for the group. "We've devastated their networks and eliminated leaders at all levels."

The breakthrough in the Raqa operation, which was launched on June 6, came after a deal was struck allowing the evacuation in recent days of civilians who had been held as human shields.

Under the deal, a total of 275 Syrian IS fighters and relatives also surrendered to the SDF, though it was unclear whether they would be given safe passage elsewhere.

- IS confined to 'dwarf territory' -

The battle for the city was fierce, with the Syrian Observatory for Human Rights monitor saying Tuesday at least 3,250 people had been killed, including 1,130 civilians, with hundreds more still missing.

Its capture leaves the group with little more than a "dwarf territory" in neighbouring Deir Ezzor province, said Nicholas Heras, a fellow at the Centre for a New American Security think tank.

"IS will be mainly boxed into a strip of territory running along the Middle Euphrates River Valley in the province of Deir Ezzor," he told AFP.

"This will be the centre of gravity for IS in Syria."

The jihadists face two separate assaults in the province, which neighbours Iraq, including a campaign by the SDF.

A Russian-backed Syrian regime campaign has separately retaken swathes of territory in the province, further reducing a "caliphate" that three years ago was roughly the size of Britain.

The Britain-based Observatory said regime forces had brought the entire area between Deir Ezzor city and Mayadeen, which was retaken on Saturday, under their control following a major military offensive.

"These are not desert areas, they are villages along the Euphrates that were IS strongholds," the monitor said.

"The Islamic State group is collapsing under pressure from the regime in Deir Ezzor province," it said.

IS also controls territory in neighbouring regions on the Iraqi side of the border, where the jihadists are facing another US-backed offensive by Iraqi pro-government forces.