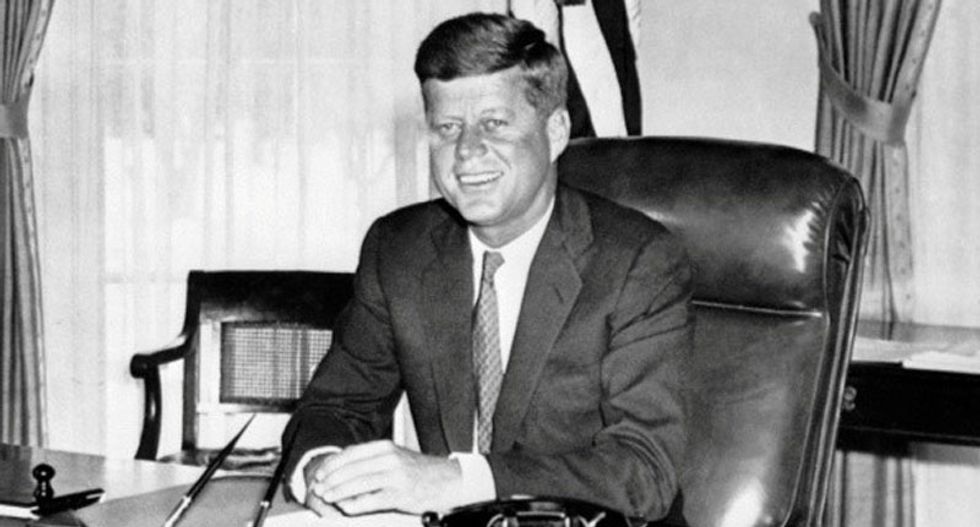 Hundreds of books and movies have fed a conspiracy industry about the death of JFK, pointing the finger at Cold War rivals the Soviet Union or Cuba, the Mafia and even Kennedy's vice president, Lyndon Johnson

The US government on Thursday released a mammoth, long-awaited trove of secret files on the killing of president John F. Kennedy, offering intriguing new insights into events surrounding one of the most infamous assassinations in history.

While many of the 2,891 records released by the National Archives were raw intelligence and uncorroborated, they were almost certain to reinvigorate rampant conspiracy theories about the November 22, 1963 slaying of JFK in Dallas, Texas.

An outlandish CIA plan to recruit the mafia to kill Fidel Castro, FBI foreknowledge of the plot to murder Kennedy's killer, and Kremlin suspicions of a homegrown rightwing conspiracy were among the highlights, even as some files were withheld for further review on national security grounds.

One document from 1975 detailed how in the early days of Kennedy's presidency the CIA offered $150,000 to Italian-American mob boss Sam Giancana to organize the killing of Cuban leader Fidel Castro.

Giancana in return sought the CIA's help to place a listening device in the room of his mistress -- a Las Vegas entertainer -- whom he thought was having an affair.

Other possible ideas to kill the Communist leader -- said to be a keen diver -- included contaminating his diving suit with disease causing bacteria, or booby-trapping a seashell with a bomb.

The plan was scrapped when it was determined "there was no shell in the Caribbean area large enough to hold a sufficient amount of explosive."

Another document included a transcript of a November 24, 1963 conversation with then FBI director J. Edgar Hoover, who said his agency informed police of a threat against the life of Kennedy's killer Lee Harvey Oswald the night before Oswald was murdered. Police, however, failed to act.

While many theories over the years have related to Oswald's ties to Cuban or Soviet operatives, an FBI memo in 1963 indicated Kennedy's death was source of deep mourning in the USSR.

According to a source, "officials at the Communist Party of the Soviet Union believed there was some well-organized conspiracy on the part of the 'ultraright' in the United States to effect a 'coup'."

The Soviets feared the killing would be used as a pretext to "stop negotiations with the Soviet Union, attack Cuba, and thereafter spread the war."

The Warren Commission, which investigated the shooting of the charismatic Kennedy, 46, determined that Oswald, a former Marine sharpshooter, carried out the Kennedy assassination acting alone.

The released files are vast in number and scope, covering everything from FBI directors' memos to interviews with members of the public in Dallas who came forward trying to provide clues after that singularly unforgettable moment in US history.

Trump said in a memorandum he had agreed to hold back for further review some records relating to the killing following pushback from intelligence agencies.

"I have no choice -- today -- but to accept those redactions rather than allow potentially irreversible harm to our nation's security," he said.

Trump gave agencies six months -- until April 26, 2018 -- to make their case for why the remaining documents should not be made public.

The 2,891 records approved for release in compliance with a 1992 act of Congress are viewable on the National Archives website, in full and unredacted form.

"The president wants to ensure that there is full transparency here," an official said, but "there does remain sensitive information in the records."

This includes, for example, the identities of informants and "activities that were conducted with the support of foreign partner organizations, either intelligence or law enforcement," the official said.

The Warren Commission's formal conclusion that Oswald killed JFK has done little to quell speculation that a more sinister plot was behind the murder of the 35th US president.

Hundreds of books and movies such as the 1991 Oliver Stone film "JFK" have fed the conspiracy industry, pointing the finger at Cold War rivals the Soviet Union or Cuba, the Mafia and even Kennedy's vice president, Lyndon Johnson.

Kennedy assassination experts eagerly awaited the opportunity to look at the files but sought to tamp down expectations.

Gerald Posner, author of "Case Closed," which determined that Oswald did indeed act alone, said people who think the files will "have the solution to the case that everybody can settle on" are going to be disappointed.

Experts agreed, however, that the documents may shed some light on an intriguing chapter in Oswald's life -- including his trip to Mexico City about seven weeks before the shooting where he is known to have met with Cuban and Soviet spies.

The CIA and FBI may be blocking the release of certain documents to hide their own failings, said Larry Sabato, a professor of politics at the University of Virginia and the author of "The Kennedy Half Century."

"They had every indication that Oswald was a misfit and a sociopath," he said.

But neither agency informed the Secret Service, which is charged with protecting the president, he said.

Oswald defected to the Soviet Union in 1959 but returned to the United States in 1962.

Two days after killing Kennedy he was fatally shot by a nightclub owner, Jack Ruby, as he was being transferred from the city jail.