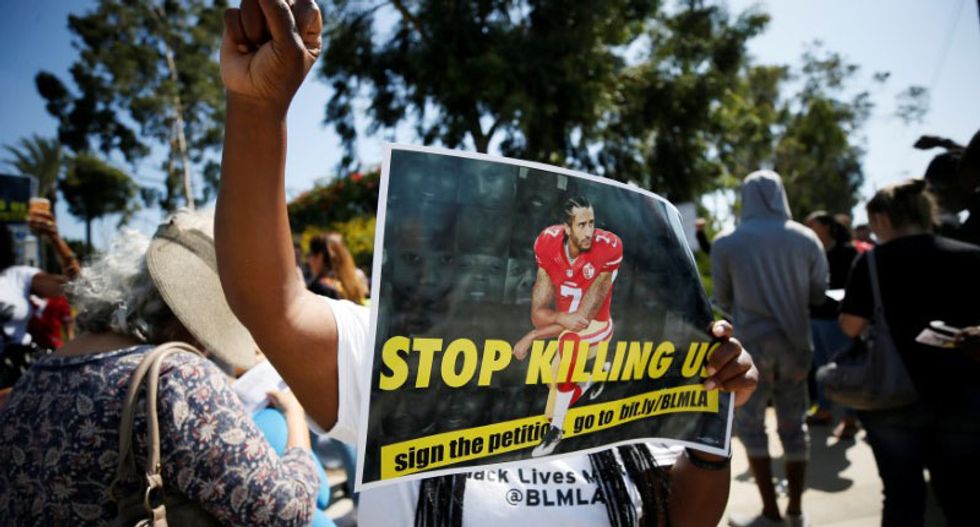 A protester demonstrates and holds a sign with Colin Kaepernick on it in support of NFL players who "take a knee" before kickoff and during the National Anthem protesting police violence while she sings the "Black National Anthem" outside the StubHub Center where the Los Angeles Chargers are playing the Philadelphia Eagles in an NFL football game in Carson, California, U.S. October 1, 2017. REUTERS/Danny Moloshok

National Football League officials will weigh the fervor of players who protest racism by kneeling for the national anthem against the anger of U.S. President Donald Trump at their two-day autumn meeting beginning on Tuesday in New York City.

Trump's unflagging criticism of the symbolic gesture as unpatriotic, which he repeated as recently as Monday, has only made the practice more widespread. His calls for fans to boycott games if players persist is an unwelcome prospect even for the world's highest-grossing sports league and have forced the topic high up the regularly scheduled meeting's agenda.

An NFL spokesman said ahead of the meeting that the president may not see an outright ban on the act soon, if ever.

"I anticipate a very productive presentation of things we can do to work together," Joe Lockhart, the spokesman, told reporters ahead of the gathering of team owners, players and their union's leaders at a Manhattan hotel. "Beyond that I don't anticipate anything else."

Trump wants the league to punish players with suspension if they kneel during the pre-game renditions of "The Star-Spangled Banner," saying on Monday the players were disrespecting the country. His vice president, Mike Pence, walked out of the stadium in Indianapolis earlier this month as players began kneeling, which Trump said he had instructed Pence to do.

Some team owners, including Dallas Cowboys owner Jerry Jones, sympathize with the president. Jones said he would punish players who kneel by keeping them off the field.

The league was more inclined to seek a compromise that allowed an outlet for the players' political activism rather than to compel them to stand during the anthem, Lockhart said.

The small but growing number of players who have taken to kneeling say they are protesting against the police killings of unarmed black men and boys across the United States and racial disparities in the criminal justice system. More than half of all NFL players are black.

Players, along with their union the NFL Players Association, have bristled at Trump's assertion they are unpatriotic. Though still a minority, more players have begun kneeling since the new season began, and some sympathetic teammates have linked arms with the kneelers while standing themselves.

Former San Francisco 49ers quarterback Colin Kaepernick, who first popularized the gesture last year, said he settled on kneeling as a form of protest because it is widely seen as a gesture of respect.