NYC's 'Lime-A-Rita Racist' says he 'isn't that sorry' for his subway tirade: 'It's the First f*cking Amendment' 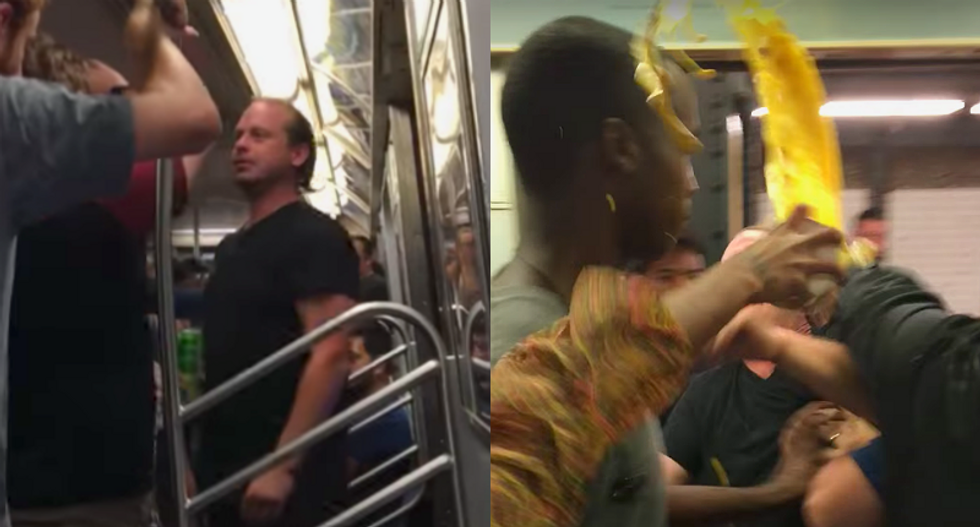 A man who identified himself as an NYU law graduate (left) gets soup thrown at him for using the n-word repeatedly on NYC subway (right). Images via screengrab.

New York's now-infamous “Lime-A-Rita racist” spoke out Tuesday after he was caught on video hurling racial slurs before getting pushed out of an L Train subway car and getting soup thrown on him.

According to Gothamist, the reported NYU Law graduate's name is Paul Lawson, and in now-deleted Facebook posts and comments, he claimed he plans on "getting help" -- after deleting comments that doubled down on his repeated use of the n-word.

"For all of you that saw that unfortunate video I'm getting help and really don't know how it came up in the first place," Lawson wrote in a now-deleted post on Tuesday. "And if it makes you feel any better I had my head broken open the next day so there's that."

Another user then commented with screenshots from a comment Lawson previously deleted, which initially showed the supposed "legal scholar" responding to the video of him drunkenly yelling the n-word in a packed subway car defensively.

"It seems that a lot of hearsay set me off as usual," Lawson wrote. "I'm not that sorry I feel bad I used that word but I was making a point, lots of comedians do that; it's the first f*cking amendment and look at the liberal mob beating up the peaceful protester now f*cking losers [sic]."

You can watch video of Lawson getting forcibly pushed out of a subway car and then getting soup thrown on him by fellow passengers he offended with his language below, via Gothamist. The video was originally captured by Joshua R. Pyne.