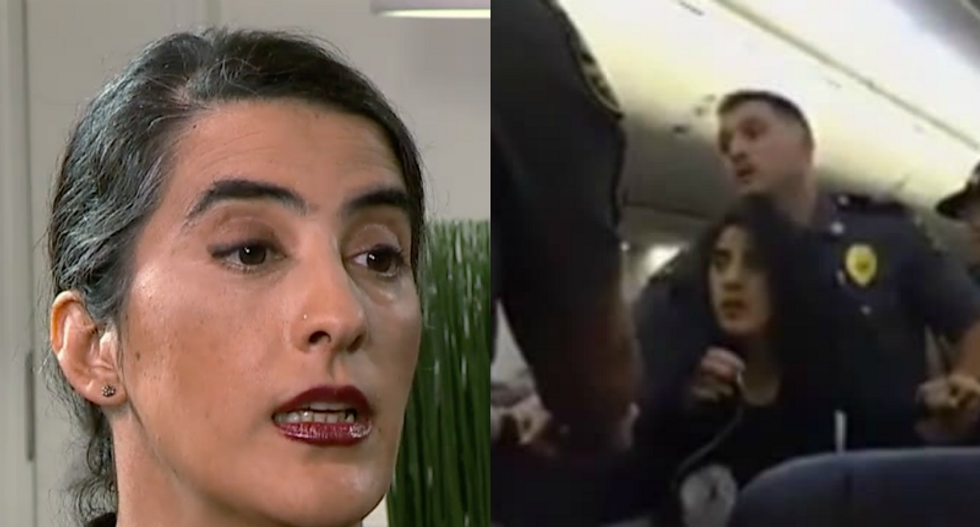 Anila Daulatazai, a MICA professor who was dragged off a Southwest flight in Baltimore. Images via screengrab.

Last week, video of Anila Daulatzai being dragged off a Southwest Airlines flight in Baltimore went viral, making her the latest in a long string of people alleging brutality on the part of airport security. At the time, the airline told media the incident occurred after a dispute over a "life-threatening pet allergy" the passenger has.

According to BuzzFeed News, Daulatzai has now spoken out, and claims that she was unfairly targeted by security based on her ethnicity and religion.

Daulatzai's lawyers said in a statement that she spoke with Southwest staff prior to the flight, and they came to an agreement that she could sit in the rear of the plane, away from the dogs on board the plane, to avoid triggering her "non-life threatening allergy"

Instead, her lawyers said, she was approached by other staff after speaking with representatives and asked to leave the plane. When she pushed back and said she was told she would be alright to stay on the plane away from the dogs, they called security -- who then dragged her through the aisles of the plane, tearing her pants and humiliating her. This part of her ordeal was recorded by a fellow passenger in the now-viral video.

"Her removal from the flight had nothing to do with allergies or safety concerns," her lawyers' statement read. "Professor Daulatzai was profiled, abused, interrogated, detained, and subjected to false reporting and the trauma of racist, vitriolic public shaming precisely because she is a woman, a person of color, and a Muslim."

After she was dragged off the plane, Daulatzai was "disparaged" by Maryland Transportation Authority Police, who "accused her of lying about her pregnancy, and made racist remarks about immigrants."

"Professor Daulatzai suffered physical injuries and mental trauma, required emergency care at a local hospital, including for her pregnancy, and is under continuing medical care," her lawyers said in their statement. She's "also received hate mail, including racist messages and threats of further violence. There was an attempted break in into her home. She has since left her home, fearing for her safety."

The man who recorded the now-viral video of Daulatzai, Bill Dumas, said that the police were "overly aggressive" with the pregnant Maryland Institute of College Art professor, and that fellow passengers were shouting at them to "just get her out."

You can watch Dumas' video of Daultazai being dragged off the Southwest flight below.

Woman dragged off #Southwest flight from #Baltimore to #LosAngeles. Complained of allergy to animal on board. Didn't have card for allergy. pic.twitter.com/vCTzDhMkiH