Slip 'in and out of a hotel armed' and undetected: Guns & Ammo editor outlines AR-15 bag features in November issue 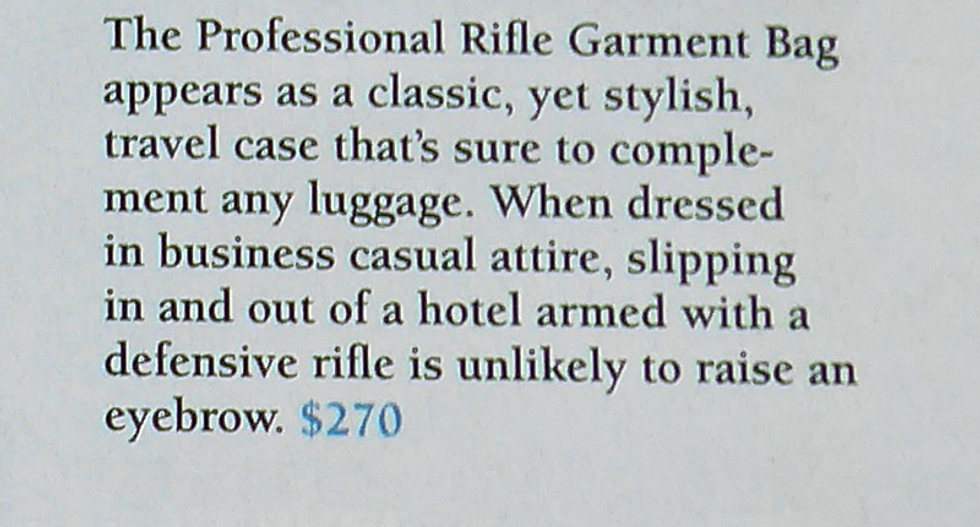 "When dressed in business casual attire, slipping in and out of a hotel armed with a defensive rifle is unlikely to raise an eyebrow," Guns and Ammo explained of the Vertx Professional Rifle Garment Bag.

In the aftermath of the Las Vegas Strip shooting massacre, one nagging question is how could Stephen Paddock bring an arsenal of long-guns into the Mandalay Bay hotel without being noticed? The November issue of Guns & Ammo magazine promotes an item designed to do just that

Managing editor Chris Mudgett wrote a four-page story hyping a rifle bag of a "discreet nature" that "appears as a classic, yet stylish travel case."

"When dressed in business casual attire, slipping in and out of a hotel armed with a defensive rifle is unlikely to raise an eyebrow," Guns and Ammo predicted. 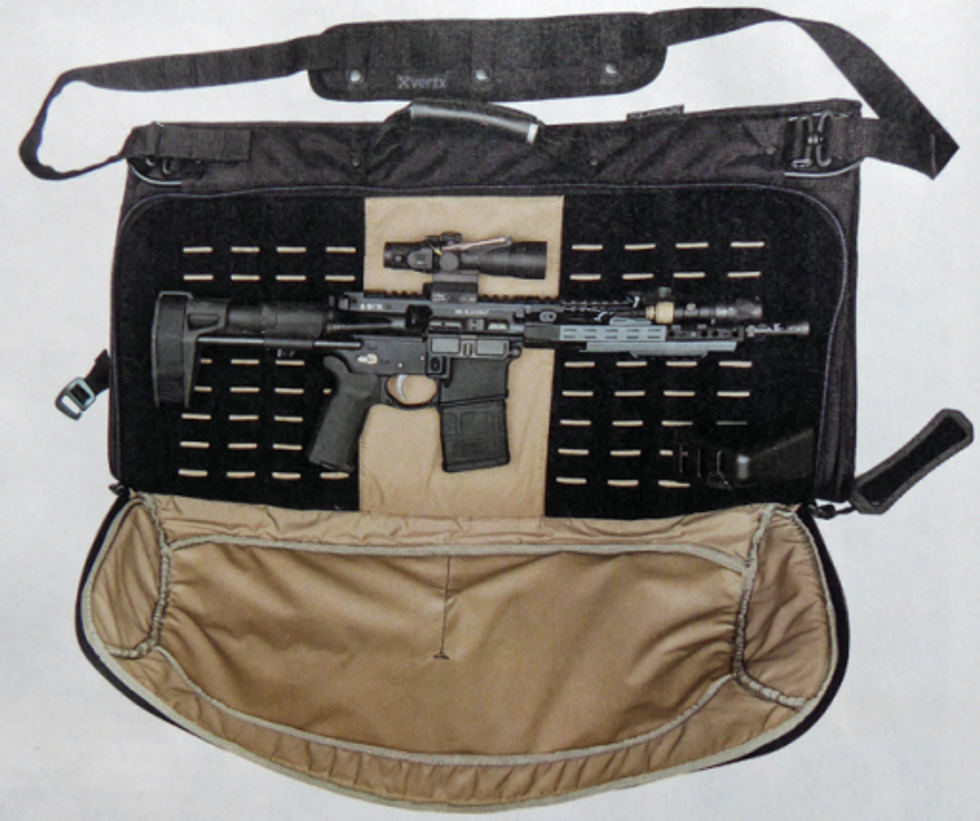 "Unzipping the clamshell-shaped pocket reveals a laster-cut, MOLLE-compatible, Velcro-lined, quick-deployment platform that is compatible with Vertx's Tactigami moldable accessories, which are used to store items such as magazines, pistols, medical kits, night vision and so on" Guns & Ammo says of the Vertx Professional Garment Bag.[/caption]

Berkshire Hathaway owns the Fechheimer Brothers Company, which manufactures the $270 case. The Vertx label grew out of a partnership with the FBI's Hostage Rescue Team (HRT).

"My average draw time to fire a single shot and strike the A-zone of a target from 25 yards was a little more than 4 1/2 seconds," Mudgett wrote. "My best time was recorded at a brisk 4 seconds flat, which proves this to be a very practical solution for discreetly carrying a carbine amongst the public."

The story notes that the case qualifies for air travel.

"While Vertx's Professional Garment Bag is actually a garment bag, it is designed with discreet accommodations for a short-barrel rifle (SBR), sub-gun or AR pistol so long as the over-all length is 28 inches or less," Guns & Ammo explained.

This is not Guns & Ammo managing editor Chris Mudgett's first story on covertly carrying a rifle.

In April, Mudgett wrote about the "Covert Operations Rifle Backpack" that has an "average draw-to-fire time" of 5.5 seconds.

"Elite Survival says engineers designed the Covert Operations Rifle Backpack as a method to store an AR-type carbine, but I opted to carry SIG Sauer’s new 11½-inch barreled MCX pistol chambered in 5.56 NATO," Mudget noted in his review of the $225 covert backpack. "The pack handled the weight like a champ and remained comfortable whether I threw the pack on one shoulder as I exited my house in the morning or carried it on both shoulders for an extended trail walk. Unknowing passersby only smiled." 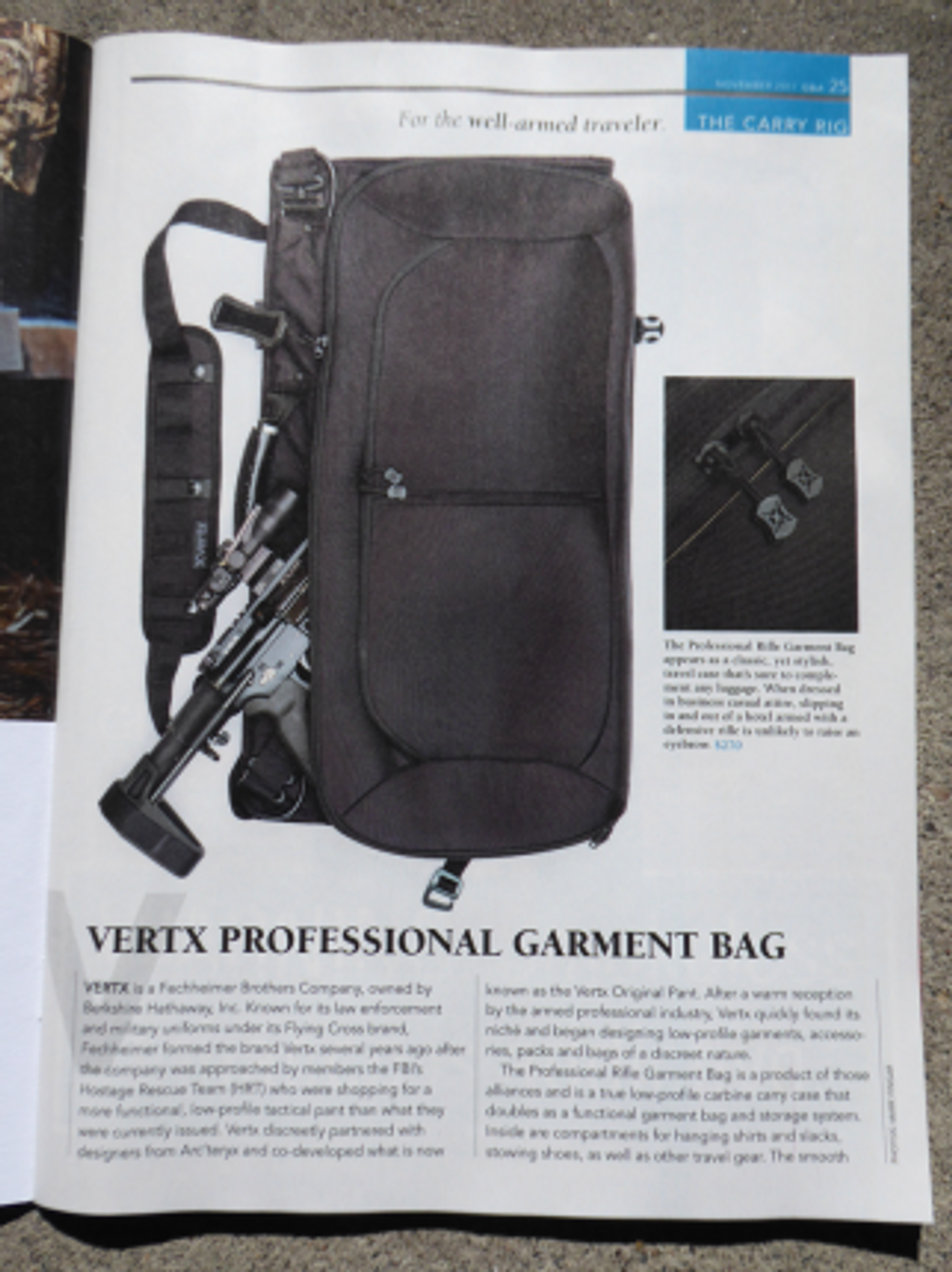 "When dressed in business casual attire, slipping in and out of a hotel armed with a defensive rifle is unlikely to raise an eyebrow," explains the first page of a four-page Guns and Ammo feature on "a true low-profile carbine carry case that doubles as a functional garment bag and storage system."[/caption]