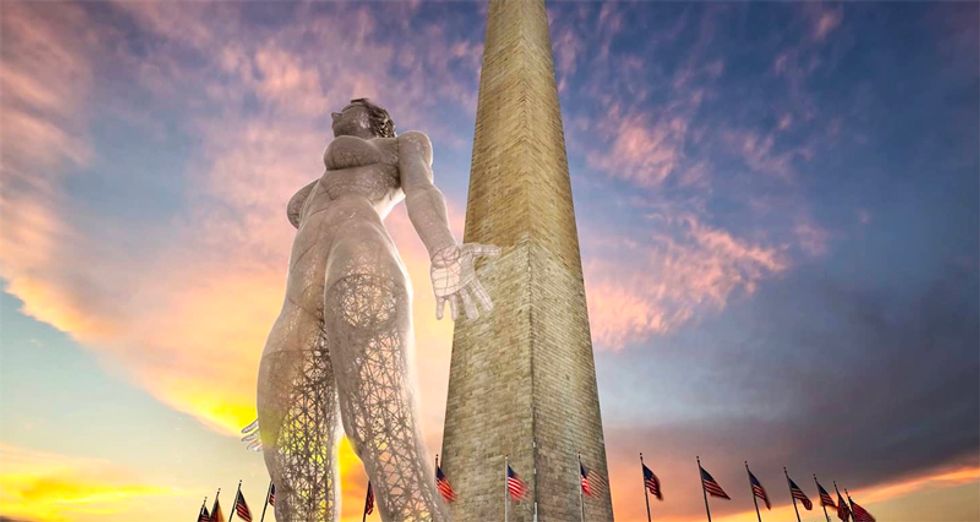 Just weeks before the start of a planned art and music event on the National Mall, organizers of the Catharsis on the Mall celebration have been told that a previously approved 45-foot tall statue of a naked woman may no longer be erected.

According to WTOP, the statue, called R-Evolution, was to have been the centerpiece of 3-day festival to be held the second weekend in D.C.

The event organizers said they were stunned by the exclusion of the massive artwork, saying they had received approval weeks ago with no push-back.

“We’re stunned by this 11th-hour reversal by the Park Service,” the organizers said, adding that they had been negotiating in recent days with both the park service and the D.C. State Historic Preservation Office to make sure the sculpture did not have an “adverse effect” on the view lines of the Washington Monument.

According the Park Service statement, the enormous nude, "introduces a visual element that would diminish the property’s significant historic features by altering the setting and historic character of the National Mall landscape.”

"They gave a whole list of reasons that are legitimately in the regulations, black and white things that we have to address, does free speech trump that or not," organizer Adam Eidinger told the DCist. "But this stuff about the content, by talking about 'this does not fit the values of the National Mall' that's like the American Taliban."

"It is an extension of the Trump administration's ongoing pursuit of silencing women," added organizer Natalie White. "The second class treatment of women is unacceptable. The number of women raped is unacceptable. And denying us a permit to speak out about these injustices is unacceptable."

You can see video about the event below: