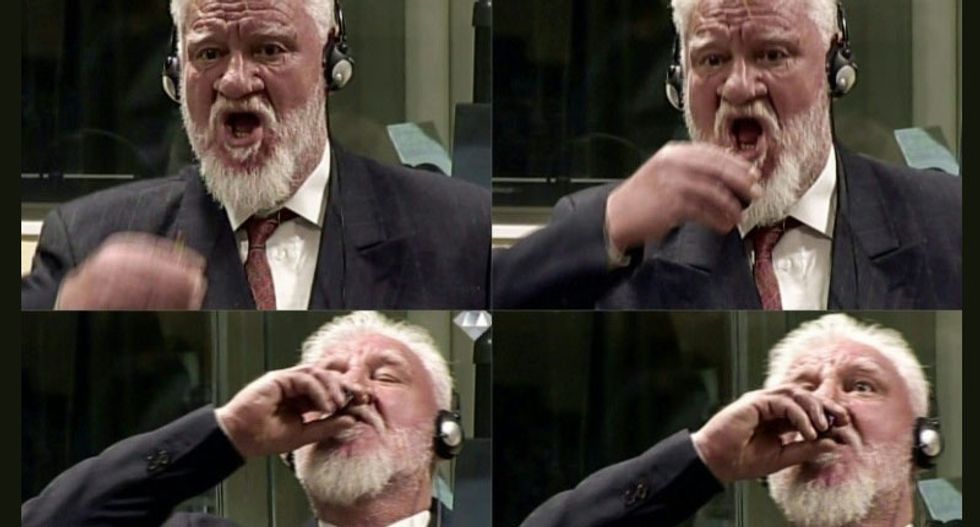 Slobodan Praljak was being treated by medics after appearing to take poison in court. (AFP)

The UN war crimes court for former Yugoslavia descended into chaos during it last judgement Wednesday when a Bosnian Croat defendant appeared to take poison to protest the upholding of his 20-year jail term.

UN judges were handing down judgement in the appeals case of six former Bosnian Croat political and military leaders, in the court's final verdict for war crimes committed during the bloody 1990s break-up of Yugoslavia.

Seconds after his sentence was upheld, former military commander Slobodan Praljak, 72, shouted out angrily: "Praljak is not a criminal. I reject your verdict."

He then raised a small brown bottle to his lips, and drank it down in full view of the cameras filming the hearing.

The unprecedented scenes came just after the judges also upheld a 25-year prison term against Jadranko Prlic, the former prime minister of a breakaway Bosnian Croat statelet, and a 20-year term for its former defence minister Bruno Stojic.

But the hearing was then quickly suspended as Praljak's lawyer shouted out: "My client says he has taken poison."

As court officials surrounded grey-haired and bearded Praljak, presiding judge Carmel Agius immediately ordered the proceedings suspended and the curtains screening the courtroom were abruptly closed to the public.

Within minutes AFP journalists saw an ambulance arrive outside the tribunal in The Hague, while a helicopter hovered overhead.

Praljak was specifically charged with ordering the destruction of Mostar's 16th-century bridge in November 1993, which judges in the first trial had said "caused disproportionate damage to the Muslim civilian population".

A symbol of Bosnia's devastation in the war, the Ottoman-era bridge was later rebuilt. But the city saw the worst of the Croat-Muslim clashes, with nearly 80 percent of the city's east destroyed in the fighting.

But in their ruling, the judges in fact allowed part of Praljak's appeal, saying the bridge had been a legitimate military target during the conflict. They also had overturned some of his convictions, but refused to reduce his overall sentence.

The case has been keenly watched in Zagreb, and the appeal judges said that all six men, who had been found guilty of taking part in a scheme to remove Bosnian Muslims, "remained convicted of numerous and very serious crimes."

They have not yet passed judgement on the remaining three defendants: Milivoj Petkovic, 68, Valentin Coric, 61, and Berislav Pusic, 65.

The bloody 1992-1995 war in Bosnia, in which 100,000 people died and 2.2 million were displaced, mainly pitted Bosnian Muslims against Bosnian Serbs, but also saw some brutal fighting between Bosnian Muslims and Bosnian Croats after an initial alliance fell apart.

Wednesday's verdict comes a week after the judges imposed a life sentence on former Bosnian Serb military commander Ratko Mladic, whose ruthlessness in the conflict earned him the title the "Butcher of Bosnia".

The bald and bespectacled Prlic, who once turned down a promising career in Washington as an economist, has vehemently denied the charges.

He told the court in March his trial represented "a dark side of international justice" insisting he "was not part of the chain of command" of the main Bosnian-Croat army in Bosnia, the HVO.

The prosecution had also appealed the sentences, urging judges to impose 40-year terms on Prlic and three of his co-defendants, saying the "crimes were massive in scale".

The statelet, backed by government of Croatian nationalist leader Franjo Tudjman, was formally dismantled in 1996 as part of the peace deal that ended the war.

But the "president" of Herceg-Bosna, Mate Boban, died in 1997 and Tudjman in 1999, leaving Prlic the highest-ranking Bosnian Croat official to face judgement for the crimes.

The ICTY charged Prlic and his co-defendants in 2004. The six surrendered with Croatia under pressure to comply with the court in return for joining the European Union.

The ICTY closes its doors on December 31, having indicted and dealt with 161 people.