Charges dropped against woman who laughed at Trump nominee Sessions 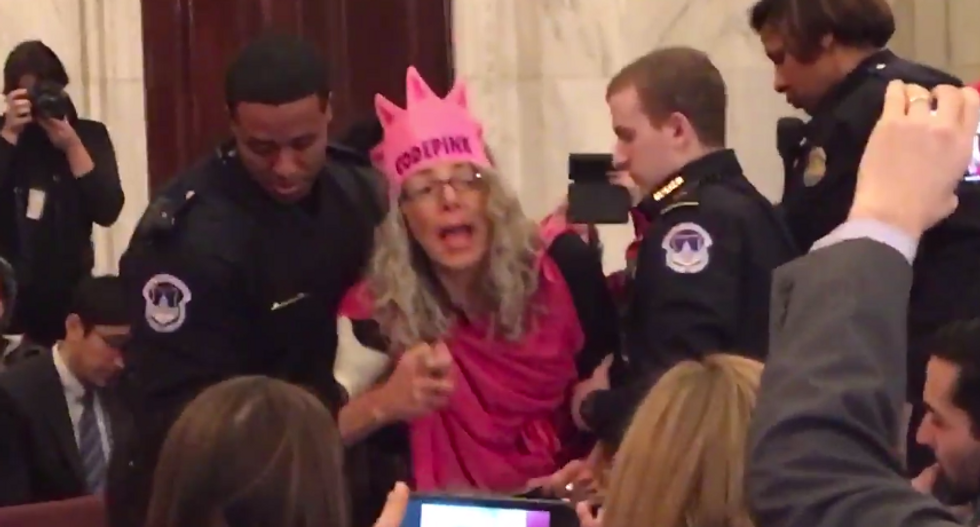 (Reuters) - A peace activist who laughed at then U.S. Senator Jeff Sessions during his confirmation hearing to become U.S. attorney general will no longer be prosecuted on charges of disrupting a session of Congress and demonstrating at the Capitol.

The U.S. attorney for the District of Columbia filed court papers on Monday, notifying a judge her office was dropping its case against Desiree Fairooz, a children's librarian.

Fairooz had faced up to six months in jail and a $1,000 fine if she were convicted on both charges at trial.

She belonged to Code Pink, an anti-war group that often stages protests against politicians. The group accused federal prosecutors of overreaching and wasting money on the case.

"We hope they will scale back this massive overreach and that the success we just saw in Desiree's case will encourage more people to protest in the halls of Congress and on the streets," Code Pink said in a statement on Tuesday.

Fairooz laughed during a Senate Judiciary Committee hearing in January, after a lawmaker's asserted Sessions treated all Americans equally. It was at the confirmation hearing for Sessions, who was then a Republican senator from Alabama and was later confirmed to become U.S. attorney general.

Fairooz shouted, "This man is evil, pure evil" as police led her away. A jury found Fairooz guilty in May of disrupting a session of Congress and demonstrating on Capitol grounds.

But a judge for the District of Columbia Superior Court overturned the guilty verdict in July and ordered a new trial. Chief Judge Robert Morin found it was unclear whether Fairooz was convicted for laughter or for speaking out as she was removed, Fairooz's attorney, Samuel Bogash, said at the time.

A spokesman for the U.S. Attorney for the District of Columbia said in an email on Tuesday that his office had no comment on the decision to dismiss the case.

A second trial for Fairooz had been scheduled for Nov. 13, but Morin canceled it after prosecutors dropped the case.