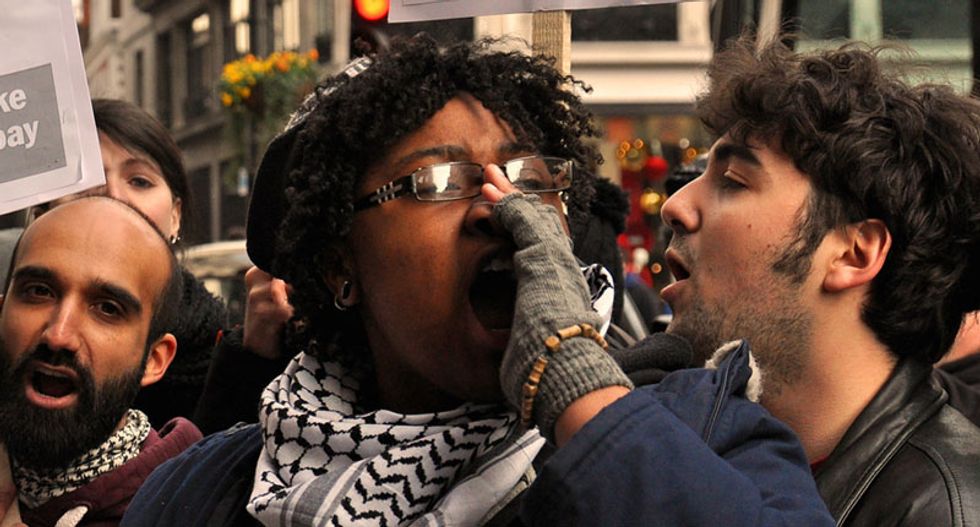 Protesters shout during a rally in the UK (iDJ Photography/Flickr)

When Ramon Mejía learned about an anti-Islam demonstration in Houston last year, he organized a counterprotest — but he said he didn't get the idea from a Russian Facebook page.

Last week, federal lawmakers made public that two Russian Facebook pages organized dueling rallies in front of the Islamic Da'wah Center in Houston. One ad from the Russian-controlled Heart of Texas Facebook group announced a May 21, 2016, rally to "Stop Islamification of Texas," while another Russian-sponsored account announced a "Save Islamic Knowledge" counterprotest.

Counterprotesters say their presence wasn’t influenced by the Russian Facebook ad but by the white supremacists who said they would attend.

Hannah Bonner, a United Methodist pastor who attended the counterprotest, said there’s a community in Houston that’s now accustomed to responding to similar events led by hate groups. The protesters at the Da'wah Center had already been active and organized before the Heart of Texas ad.

“We have to respond repeatedly in different locations and at different times, and in this case, the Russians selected the time and place, but they did not create the fear or the white supremacy — they just created an opportunity,” Bonner said. “We can’t blame Russia for the problem with racism that we have.”

Mejía said he was especially moved to organize when he saw a White Lives Matter leader in Houston, Ken Reed, was going to attend the anti-Islam protest.

"This is the only instance we know of where extremists were actually motivated to show up to a 'Russian' event," Mark Pitcavage, an Anti-Defamation League expert on right-wing extremism, said in a direct message on Twitter.

A NewsFix report from the day of the protest said Reed “wouldn’t identify as a member of Heart of Texas.”

“This is America. We have the right to speak out and protest, and that’s what we’re doing. We feel that Texas, our great state, and the United States is being threatened by the influx of Islam,” Reed said, according to the report.

Attempts to reach Reed and other White Lives Matter organizers were not immediately successful.

Steven Orozco, another demonstrator at the anti-hate rally, called the Russian strategy for inflaming racial tensions "smart and brilliant."

“If that’s what happened, kudos to Russia for pulling off something that’s honestly easy to detect," Orozco said. "As far as racism in the United States, in that case it’s a very effective tool."

BY ALEX ARRIAGA, THE TEXAS TRIBUNE