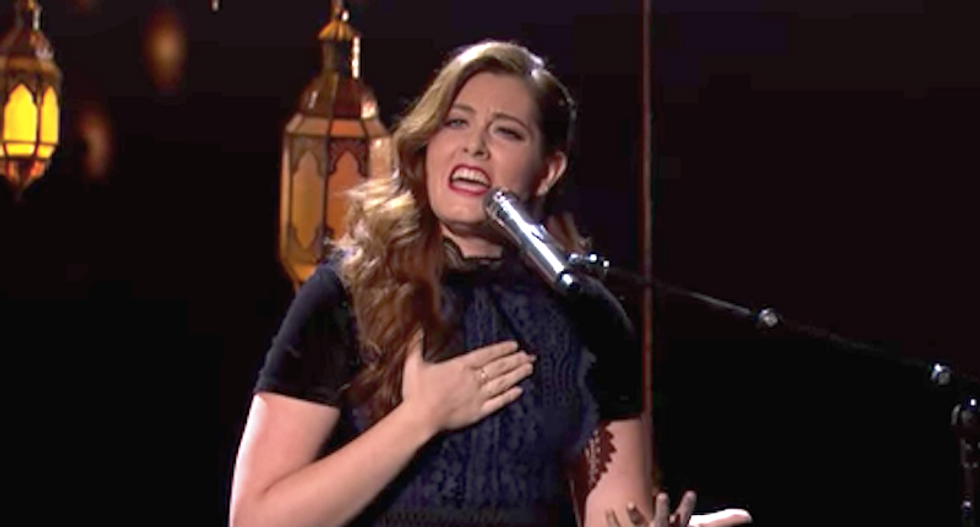 A deaf singer received death threats from other deaf people for performing music on a reality TV show.

Mandy Harvey was among the final 10 contestants in the most recent season of "America's Got Talent," but the singer angered others in the deaf community, reported BBC News.

"I used to get some pretty strongly-worded letters and death threats," Harvey told the network. "I got a lot of backlash from certain people in that community because I was promoting oralism."

That's the practice of teaching deaf people to use speech and lip-reading instead of sign language.

"When you're doing something that is living inside the hearing world, such as music and singing, it can be frowned upon because we're supposed to be encouraging ASL (American Sign Language) only," Harvey said.

The term "oral" can be used as an insult within the deaf community.

"It's like saying 'you're not one of us,'" said Charlie Swinbourne, editor of the deaf blog The Limping Chicken. "Although some deaf people use it to describe themselves, I wouldn't call anyone oral out of the blue and because I can communicate with speech as well as sign, I've had it said to me, which has taken me aback."

Harvey, of Cincinnati, gradually lost her hearing as a result of the connective tissues disorder Ehlers-Danlos syndrome, and she was legally deaf by the time she was 19 years old and starting college.

"I was sitting there, waiting for the test to start, and I'm looking around the classroom and all these pencils are moving and everybody starts getting up and handing in their papers and one by one they left, and I was just sitting there," Harvey said.

Before losing her hearing, Harvey said music was her life -- and she continued performing.

"Even though she sings, it doesn't mean that she hasn't got a foot in the deaf community," Swinbourne told the BBC.

Harvey didn't reveal she was deaf right away on the NBC reality show, where she performed original songs and finished fourth in the finals.

"I really wanted to change the idea of what is possible and to show that 'deaf can' and what better place to do that than on national television?" she said. "If it hacks off a couple of people, well it's encouraging a heck of a lot more, so they can just get over it."

Harvey performs barefoot so she can feel the vibrations of the rhythm, and she keeps eye contact with fellow musicians to signal starting and stopping points.

"Losing my hearing was always my biggest fear, so what's the worst that can happen, sing the wrong notes?" she said. "Who cares, it's not going to kill you. There have been a couple of times I've started the song in the wrong key. We stop the song, we all laugh together and we start the song again, and we go for it."