Doughnuts, dueling memos factor in showdown over US consumer agency 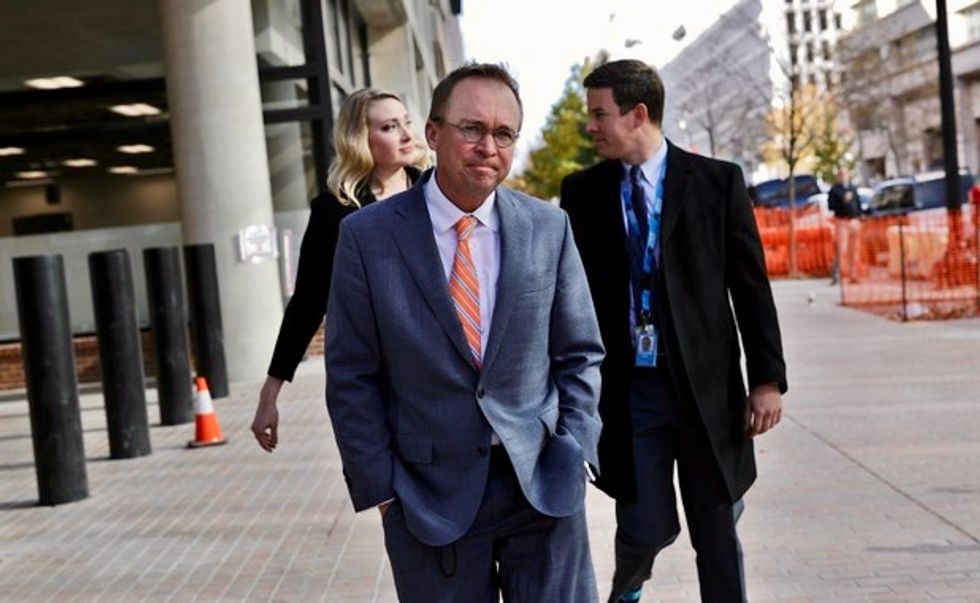 With doughnuts in hand, President Donald Trump's appointee to head the U.S. government consumer watchdog agency turned up for work on Monday, challenging the acting appointee of the outgoing Obama-era head in an unprecedented partisan showdown over how the U.S. financial system should be regulated.

Mick Mulvaney, who already serves as White House budget chief, was named acting director of the Consumer Financial Protection Bureau (CFPB) by Trump last week. But Mulvaney, who tried to dismantle the agency when he served in the U.S. House of Representatives, faces a challenge from Leandra English, who was named temporary head of the agency by outgoing director Richard Cordray hours beforehand.

Both issued statements on Monday morning indicating they were in charge.

English sent an email in which she welcomed staff back from the Thanksgiving holiday and signed off as "acting director," according to a source.

But Mulvaney quickly installed himself in Cordray's former office and stood his ground, writing in a staff email an hour later:

"Please disregard any instructions you receive from Ms. English in her presumed capacity as Acting Director," he said in a memo seen by Reuters. "If you receive additional communications from her today ... please inform the General Counsel."

Mulvaney also signed off as "acting director" and invited staff to pop by his office on the fourth floor to "grab a donut."

His communications director tweeted a picture of Mulvaney “hard at work as acting director” with the bureau’s transition briefing handbook on his desk.

It was not clear if English was in the building, too.

The source said that as Mulvaney was getting settled in, CFPB general counsel Mary McLeod sent a memo she had prepared on Sunday to the CFPB's legal division agreeing with an opinion of the U.S. Justice Department that Trump had the power to appoint Mulvaney as temporary leader of the watchdog.

In yet another twist late on Sunday, English sued the Trump administration seeking to block Mulvaney's appointment. The move means a federal court will decide which law applies when filling a temporary leadership vacancy at the relatively new agency.

The conflict began when Cordray formally resigned from the CFPB, which was established in 2017, and named English, his chief of staff, as temporary director.

Hours later, Trump sought to overrule that move by naming Mulvaney, a harsh critic of the agency, as acting director until he can get a permanent successor confirmed by the Senate, a process that could take months.

The CFPB, which was created in the wake of the 2008 financial crisis to protect consumers from predatory lending, is hated by Republicans who think it wields too much power and burdens banks and other lenders with unnecessary red tape.

President Barack Obama appointed Cordray, a Democrat, as the CFPB's first director and he developed a reputation for drafting aggressive rules curbing products such as payday loans while issuing multimillion-dollar fines against large financial institutions such as Wells Fargo .

In a weekend tweet that did not mention specifics, Trump called the agency a "total disaster" that had "devastated" financial institutions. He has pledged to roll back many of the Obama-era financial regulations.

Liberal groups and consumer advocates staged a small rally in front of the CFPB headquarters on Monday morning to demonstrate support for the agency.

AN AGENCY IN LIMBO

As acting director, Mulvaney would have the power to make far-reaching decisions on enforcement and supervision of financial firms.

Trump administration officials say the president has the power to appoint an acting director under the 1998 Federal Vacancies Reform Act and McLeod's three-page memo agreed.

"I advise all Bureau personnel to act consistently with the understanding that Director Mulvaney is the Acting Director of the CFPB," McLeod's memo, dated Nov. 25, stated.

Such advice will stick in the throats of many CFPB staffers. Mulvaney once described the agency as a "sad, sick joke" and tried to get rid of it when he was a Republican congressman.

English alluded to Mulvaney's views on the CFPB in her lawsuit. She has argued that the 2010 Dodd-Frank Wall Street reform law that created the bureau stipulated that its deputy director would take over on an interim basis when a director departs.

The CFPB was the brainchild of Elizabeth Warren, a Democratic senator and liberal firebrand. Over the weekend, lawmakers from both parties lined up to give opposing views of its role.

While the legal battle rages, the CFPB's enforcement work will be put in limbo.

"Anything that the agency does or fails to do could be subject to challenge until this cloud is removed," said Harvard Law School professor Laurence Tribe.

Cordray did not give a reason for his departure but he has long been rumored to harbor ambitions to run for governor of Ohio.