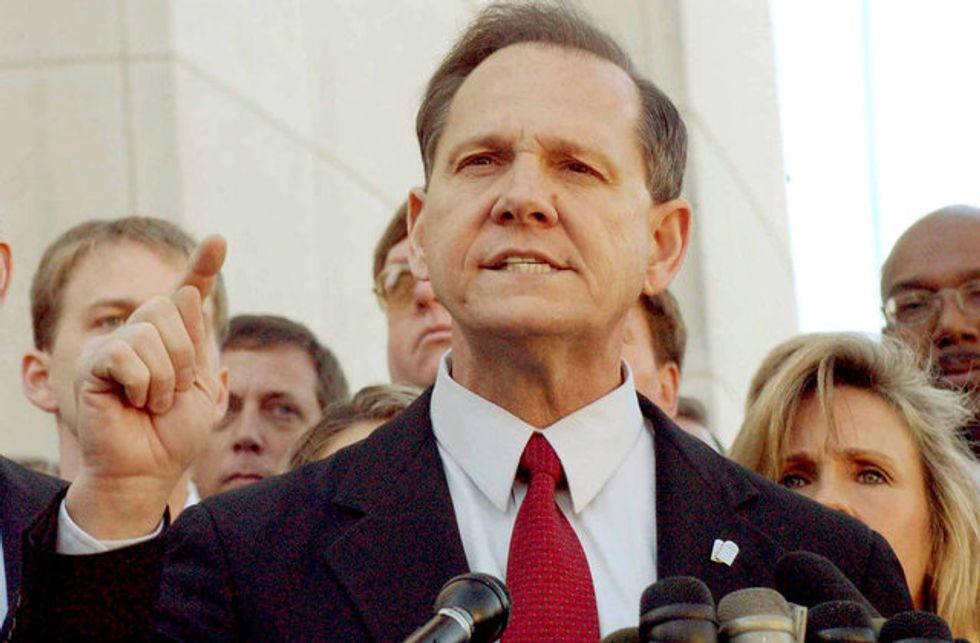 Beverly Young Nelson said Moore sexually assaulted her when she was 16 and he was a prosecuting attorney in his 30s. At a New York news conference, the tearful Nelson said Moore groped her, tried to pull her shirt off and shove her head in his lap, then warned that "no one will believe you" if she told anyone.

"I was twisting and struggling and begging him to stop," said Nelson, a waitress at an Alabama restaurant where Moore often ate when the incident occurred. "I had tears running down my face."

Moore, a Christian conservative and former chief justice of the Alabama Supreme Court, has refused to withdraw from the race. His campaign released a statement denying "any sexual misconduct with anyone" and saying the new allegations were part of a "witch hunt."

At a news conference in Gallant, Alabama on Monday night, Moore told reporters that Nelson's accusations are "absolutely false," the Birmingham News reported.

"I never did what she said I did," the newspaper quoted Moore as saying. "I don't even know the woman. I don't know anything about her."

McConnell told reporters in his home state of Kentucky that party officials were considering whether a Republican write-in candidate could be found to challenge Moore in the Dec. 12 special election.

"I think he should step aside," said McConnell, who previously said Moore should leave the race if the allegations were true. "I believe the women."

Republican Senators Orrin Hatch, Susan Collins, Lindsey Graham, Todd Young and Cory Gardner joined McConnell in calling for Moore to drop out - a move that could open the door for Democrats to cut into Republicans' narrow two-seat Senate majority.

Gardner, the head of the Senate Republican campaign arm, said Moore was unfit to serve in the Senate.

"If he refuses to withdraw and wins, the Senate should vote to expel him, because he does not meet the ethical and moral requirements of the United States Senate," Gardner said in a statement.

Senator John Cornyn, the Senate's No. 2 Republican, withdrew his endorsement but said Alabama voters should make the final judgment on Moore.

Another prominent conservative who had endorsed Moore, Senator Ted Cruz, said Moore should either clearly refute the allegations or if they are true, drop out. "I am not able to urge the people of Alabama to support his candidacy so long as these allegations remain unrefuted," Cruz told reporters in the Capitol.

Moore, 70, had been a heavy favorite to win the election against Democrat Doug Jones. He has denied the allegations first raised in a Washington Post story about his relationships with four women when they were teenagers, including a charge he initiated sexual contact with a 14-year-old girl when he was in his 30s.

He said on Twitter that McConnell was the person who should step down.

"He has failed conservatives and must be replaced," Moore said.

The state party and many other Alabama Republicans have not wavered in their support of Moore, who scored a decisive Republican primary victory in September over Luther Strange. Strange, who drew the support of President Donald Trump in the primary, had been appointed to fill the seat vacated by Jeff Sessions when he became U.S. attorney general earlier this year.

The growing furor over Moore sets up a confrontation between establishment Republicans and Moore's supporters in the party's populist movement led by former White House chief strategist Steve Bannon.

A Democratic win in Alabama would be a blow to Trump's agenda and shift the political outlook for next year's congressional elections, giving Democrats a stronger shot at recapturing control of the Senate.

It is too late to remove Moore's name from the ballot, but McConnell told reporters he was "looking at" potential write-in candidates who could mount a successful campaign. Asked if Strange might be a candidate again, he said: "We'll see."

But Strange told reporters it was "highly unlikely" he would mount a write-in campaign. "Now it’s going to really be up to the people of our state to sort this out," he said.

A special-election victory had been a long shot for Democrats in Alabama, which has not elected a Democratic senator in a quarter century. Jones, a former federal prosecutor, was trailing by double digits in some opinion polls.

Moore, who is prone to incendiary comments on social and cultural issues, has survived controversy before. He was twice forced out of his position as chief justice, once for refusing to remove a Ten Commandments monument from the courthouse and once for defying the U.S. Supreme Court decision legalizing same-sex marriage.

He threatened over the weekend to sue the Post and said the allegations were a smear campaign by his political opponents. Reuters has been unable to independently confirm any of the allegations.

While making the new allegations, Nelson showed reporters Moore's signature in her high school yearbook. She said he had offered to give her a ride home one night, then pulled the car behind the restaurant and assaulted her.

"I was terrified," she said. "I thought he was going to rape me."

Nelson said she told her sister about the attack two years afterward, and eventually told her mother and husband. She said she backed Trump for president and was not coming forward because of politics but because she was inspired by the women who talked to the Post.

(Additional reporting by Susan Cornwell and David Alexander in Washington and Peter Szekely in New York; Editing by Bill Trott and Peter Cooney)