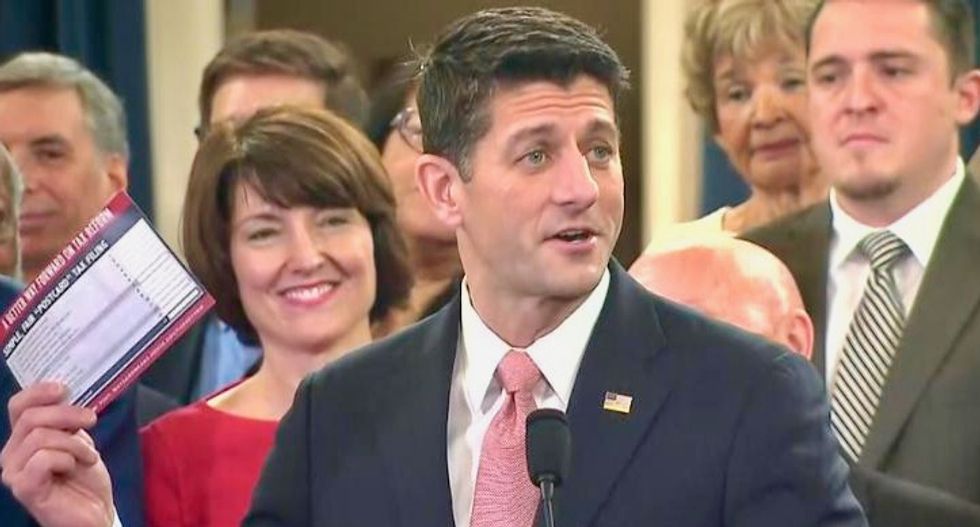 Republican lawmakers on Monday began revising their proposed overhaul of the U.S. tax code as rumblings of dissent within their ranks over the repeal of a popular federal tax deduction threatened to undermine passage of the legislation this month.

The draft bill unveiled last week by Republicans in the House of Representatives, if enacted, would be the biggest restructuring of the tax system since the 1980s and the first major legislative victory of the Trump presidency.

Although Republicans generally support the bill's broader themes, including a sharp reduction in the corporate income tax, they are torn over other elements, including the repeal of the deduction for state and local income tax (SALT) payments.

New York, California and other high-tax states would be hard hit by the loss of that deduction. There are enough Republicans from those states to derail the bill in Congress, given that Democrats are unlikely to offer any support.

"We are challenging the status quo here," Republican Representative Kevin Brady, chairman of the tax-writing House Ways and Means Committee, told CNBC in an interview. "We are eliminating the income tax deduction and using those taxes to reduce taxes on all Americans."

Brady noted that the bill kept deductions for mortgage interest, charitable donations and property tax payments up to $10,000 per year. He also pledged to change the bill's approach to the "carried interest" loophole by lengthening the time an asset would have to be held to qualify for the lower rate.

Carried interest is a share of an investment fund's profits – typically about 20 percent beyond the return guaranteed to investors – that goes to the general partners of private equity, venture capital and hedge funds.

Under current law, high-income fund partners pay the long-term capital gains rate of 20 percent on their carried interest income, instead of the 39.6 percent individual tax rate that applies to the ordinary wage income of high earners.

President Donald Trump promised to close the loophole, which has benefited some of Wall Street's wealthiest financiers.

"We will make changes," Brady said. "We will put in a two-year holding period on carried interest to make sure, really, it's focused on those long-term traditional real-estate partnerships."

Failure to address that loophole could provide further ammunition to Democrats, who have painted Trump's plan as a gift to the rich and corporate America that would balloon the federal deficit. The plan is projected to add $1.5 trillion over 10 years to the $20 trillion deficit.

The Senate is developing its own version of the tax legislation which would have to eventually be reconciled with the House version before it is sent to Trump for signing. Republicans control both chambers of Congress.

Securing congressional passage of the tax plan is critically important to Trump, who has yet to get major legislation through Congress since taking office in January, including a healthcare overhaul he promised as a candidate last year.

Investors are adding to the pressure to pass the tax bill. The expectation of deep tax cuts has helped fuel a stock market rally during Trump's time as president, with the broad S&P 500 index <.spx> up about 14 percent.

The White House argues that tax cuts are needed to boost economic growth and create jobs.

The linchpin of the plan is the reduction of the corporate tax rate to 20 percent from 35 percent and establishment of a 25 percent tax rate for "pass through" businesses, which currently pay income tax rates as high as 39.6 percent.

Speaking to Fox News Sunday, Republican House Speaker Paul Ryan said there were a "host of ideas" being considered as lawmakers begin revising the bill, though he expected the broad outlines to remain the same.

He added that he still believes the House is on track to vote on a revised tax bill before the U.S. Thanksgiving holiday on Nov. 23.

"The tax reform bill in 1986 was written in a bipartisan manner from start to finish," Representative Richard Neal, the top Democrat on the tax-writing committee, said in opening remarks to the panel as it convened on the tax bill. "This is a missed opportunity."